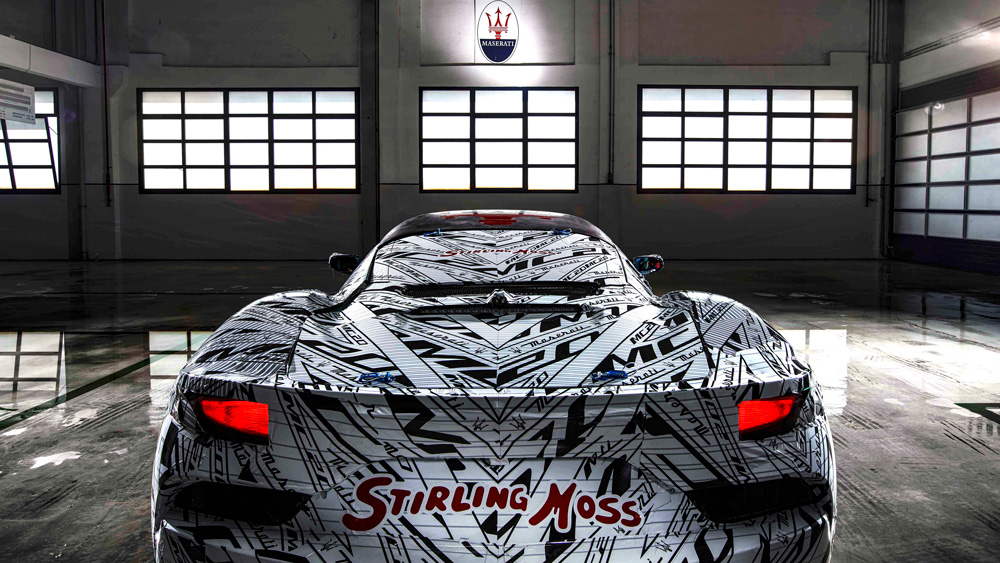 Maserati had planned to pull the covers off its new, highly anticipated, mid-engined MC20 supercar this month. That was before COVID-19 put plans on hold.

But to keep the 600 hp two-seater in the spotlight until its rescheduled reveal this September, the Italian marque is using an MC20 prototype to pay tribute to one of its most famous race-car drivers, the late Sir Stirling Moss.

Yesterday’s announcement coincides nicely with Moss taking his works Maserati 250F to victory in the 1956 Monaco Grand Prix—held on May 13 that year—where he led the race from start to finish.

Clockwise from center: The MC20 prototype, the Maserati Eldorado and the Maserati 250F.  Photo: Courtesy of Maserati S.p.A.

To commemorate the win, and to sprinkle a little motorsport pixie dust on the upcoming MC20, Maserati has vinyl-wrapped a prototype and featured Sir Stirling’s name on the rear panel, across the rear window, and over the front fenders.

The lettering is in a similar typeface to that used for Moss’ name on Maserati’s iconic “Eldorado” single-seater that the Englishman, who died April 12 at age 90, debuted at the Monza track in Italy back in 1958.

A young Stirling Moss with the Maserati 250F.  Photo: Courtesy of Maserati S.p.A.

Unfortunately, the black and white Maserati wrap cleverly camouflages the design details of the upcoming MC20. That said, it still gives plenty of clues as to the proportions of the machine.

Clearly inspired by the lines of Alfa Romeo’s mid-engined 4C—there are rumors that the Maserati uses a modified version of the Alfa’s carbon-fiber monocoque—the MC20 appears to be a much larger car than the Alfa.

What is official is that it’ll be powered by an all-new twin-turbo V-6 that has been designed, developed and built entirely by Maserati. Insiders suggest the engine will pack more than 600 hp. Also known is that there are plans for a hybrid version—perhaps with more than 700 hp— along with a pure electric variant.

And there are firm plans for Maserati to take the MC20 to the track. After all, the MC badging is short for Maserati Corsa (“corsa” being Italian for “track”).

The prototype getting prepped on the track.  Photo: Courtesy of Maserati S.p.A.

Many see the new MC as the spiritual successor to the brutal Maserati MC12 supercar, which was based on the Ferrari Enzo and powered by a 630 hp version of its screaming V-12.

Between 2004 and 2010, the Trident-badged MC12 campaigned in GT and GT1 championships, winning 22 races and 14 titles. A total of 50 road-focused examples were built and today sell for over $3 million on the rare occasions when one comes up for sale.

Following the MC20’s September debut, production is expected to kick off at Maserati’s Viale Ciro Menotti factory in Modena, Italy, next spring. An open-top version is likely to be seen in 2022.

No word yet on official pricing or when the first cars will go on sale in the United States. Perhaps Maserati should consider offering a Stirling Moss special-edition MC20. It would make the perfect garage mate to the scissor-doored SLR McLaren Stirling Moss that Mercedes-Benz built in 2009, of which only 75 examples were built. Talk about the perfect pairing.