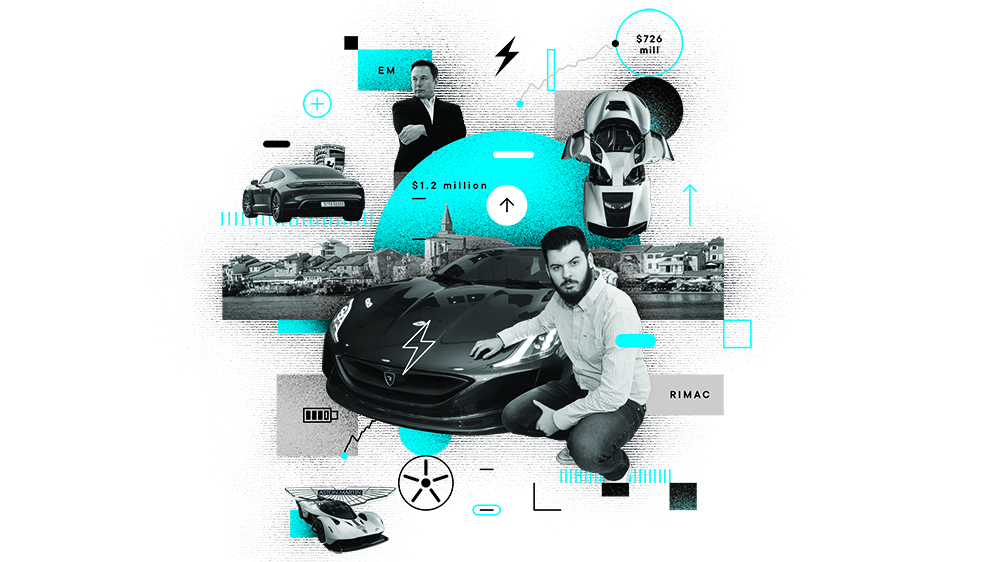 Croatia likes its upstarts: It is one itself. Less than three decades old, the country has a giant-slaying national soccer team, which almost won the World Cup; an ascendant tourism industry buoyed by Game of Thrones fans flocking to Dubrovnik, a.k.a. King’s Landing; and now its first carmaker, founded by a dynamic entrepreneur who’s barely older than this tiny nation of 4 million. Mate Rimac’s eponymous car company has turned him into a rock star in his homeland, and its technology is forcing the established players to catch up.

The 31-year-old started Rimac Automobili in 2009 and has built an acclaimed $1.2 million electric hypercar, in addition to supplying power trains for electric and hybrid hypercars from Aston Martin, Koenigsegg and Pininfarina, among others. We learned how popular he is within minutes of landing in Zagreb. After we told our taxi driver that he was taking us to Rimac, he enthusiastically recounted its founder’s backstory and nearly refused to accept the fare.

When we meet Mate, he seems genuinely pleased that the city’s cabbies are acting as unpaid influencers for him, a broad grin appearing through his dark, bushy beard. He is pleasantly, mildly nerdy and seems unaffected by his success, lacking the slightly messianic air which some tech pioneers affect. But his energy and intelligence are apparent in the way he sits bolt upright in an easy chair as we talk, and how his quick, dark eyes dart around the room.

There are more tangible measures of his success than the adulation of cabdrivers, however. He has already worked with 15 major global carmakers— some openly, most in secret. Hyundai and Porsche respect Rimac enough to have bought in, and at its most recent funding round last summer, the business was valued at $726 million. Mate (his name is pronounced MAH-tay REE- motts, but like Porsche, he doesn’t really mind how you treat that final syllable) still holds 43 percent.

That stellar valuation has two main justifications. The first is the explosion in new hybrid and electric sports cars and supercars, a trend with three main drivers. Some, like the forthcoming Tesla Roadster, exist purely for their own sake, because electric performance, with its instant acceleration and eerie silence, is so, well, electrifying. Others, like the Pininfarina Battista, also serve as attention-grabbing halo models for new carmakers that plan a range of more accessible EVs. And hybrid supercars such as the Aston Martin Valkyrie add electric motors to their gasoline engines to maximize performance while that hybrid tag makes them more acceptable to an eco-conscious public. Whatever the reason for making them, every major auto show brings a fresh crop. And some, including Rimac’s latest, top $2 million.

The second reason Mate now has a nine-figure net worth is that any carmaker wanting a piece of this electric- hypercar action likely needs his help. Mate may be young, but he has been developing his electric power trains for 13 years now, since he first ripped the engine out of his rusty BMW 3 Series, turned it into an EV, painted it green and set a Guinness World Record. Although a brilliant engineer, he’s always been a car guy first. His initial motivation was simply to build a crazy-fast electric car under his own name and, in doing so, show that EVs can be exciting, encourage their adoption and thus cut emissions. By 23, he’d founded Rimac and designed the Concept_One, which claimed at its launch in 2011 to be the world’s fastest- accelerating electric vehicle.

But Mate soon saw that building extreme EVs in very small numbers was a tough way to make a living and that there was a better business in selling his world-beating tech to established carmakers. Intrigued and maybe a little skeptical, those carmakers booked flights to Zagreb. The airport taxi drivers might already have been giving them the hard sell back then, but once those execs saw the performance numbers, they no longer needed convincing. Rimac’s electric propulsion systems boasted power and energy density—and thus performance—which even Porsche couldn’t replicate without vast budgets and years of development time. Mate and his small team had done it start-up style, with a combination of genius and obsession that you just don’t find in big corporations. His own cars will only ever be built in tiny numbers, but they serve as a shopwindow for his tech, which he licenses to the big players. His deals with businesses like Aston Martin now provide around two-thirds of his turnover.

“The fact that we are in Croatia and I was a 20-something-year-old guy was too high a risk for some,” Mate says. “And I understand that, because their companies are huge. Hyundai has four times more revenue than Croatia has GDP. So I grew a beard to look more serious. I have a baby face. Maybe it helped. I still have it.”

The interior of Rimac’s C_Two.  Courtesy of Mate Rimac

Aston Martin wasn’t worried. “The Valkyrie project has been an exercise in extreme-performance engineering,” its vice president and CMO, Simon Sproule, told us. “Our partners needed not only the same ‘moon shot’ vision but the necessary hardware and technical depth. Rimac had all of these. It’s a testament to Mate that he has created all this in a short space of time.”

At Pininfarina, CEO Michael Perschke agrees: “Mate’s age is irrelevant, as is the fact that his business isn’t based in one of the usual automotive superpowers. In fact, it may be an advantage. He is a brilliant engineer, and the performance we can give the Battista by using Rimac-developed technology is unanswerable.”

As Mate leads us around his workshops, we see the last of eight Concept_Ones being assembled. It’s more like a race or restoration shop than a car factory in here: a small, busy space with a couple of four-post lifts and everything done by hand. Production of the C_Two will start later this year in a dedicated, rather slicker new workshop. Rimac’s primary work—making complete electric propulsion systems for other manufacturers—is done at a site a few miles away, though Mate plans to bring everything together in a Silicon Valley-style campus.

“The two cars are worlds apart,” Mate says. The Concept_One has 1,224 hp and will hit 62 mph in 2.5 seconds. The final version of the C_Two will be shown at this year’s Geneva motor show. It will cost $2.1 million, have 1,914 hp and reach 62 mph in just 1.97 seconds—fast enough to cause you serious physiological disturbance.

The tail of Rimac’s C_Two.  Courtesy of Mate Rimac

His obsession is still apparent. He gestures at a prototype C_Two being disassembled on the other side of the shop. “Even between that prototype and the final car we show at Geneva, almost everything will change. Our company’s really about pushing the bar, and that’s actually a problem we have. We always have a new idea and maybe pursue this one rather than finishing the previous one.”

Perhaps predictably, Mate has been called Europe’s answer to Elon Musk, but Rimac quickly points out the gulf in their respective enterprises’ valuations and that he has delivered only the promised eight Concept_Ones so far. But the comparison is at least partly valid. Both founders are driven by a sense of mission rather than financial gain. Both are intimately involved in the tech. And both lead businesses that are highly reliant on the founder’s mojo.

“If everything goes right, my share of the company will be worth billions,” Mate tells me. “But I’m not in this for money. I have a very normal salary. In the US the average CEO earns 287 times more than the average employee. I earn three times more than our average employee. And that’s all the income I have. I’ve had offers to buy the company, but if I walk away now with a hundred million euros in my pocket and the company doesn’t achieve the clear goals I have for it, I wouldn’t feel satisfied.”

A profile view of Rimac’s C_Two.  Courtesy of Mate Rimac.

His five-year vision, as he relates it, is to have his technology in a series of electric supercars from the major carmakers and a range of such cars from Rimac, with volumes limited to a hundred or so each year, so his most important customers don’t see him as a threat. But he’s almost there already, and at the rate his business is growing he ought to be well beyond this perhaps deliberately modest goal by 2025.

Mate says that his focus is on very high-performance electric drivetrains, giving his business a clear point of difference from other exciting but mass-market start-ups, such as Rivian in the US. But he’s already working on an affordable fuel-cell vehicle for his investor Hyundai. And although he’s a car guy, he says he can see a need for cars without steering wheels in time and has a small team working on autonomous driving. It’s easy to imagine his inventiveness turning to EVs for everyone and Rimac having a significant presence in a far bigger market. Instead of enthusing about Rimacs, Croatia’s cabbies might one day be driving them.