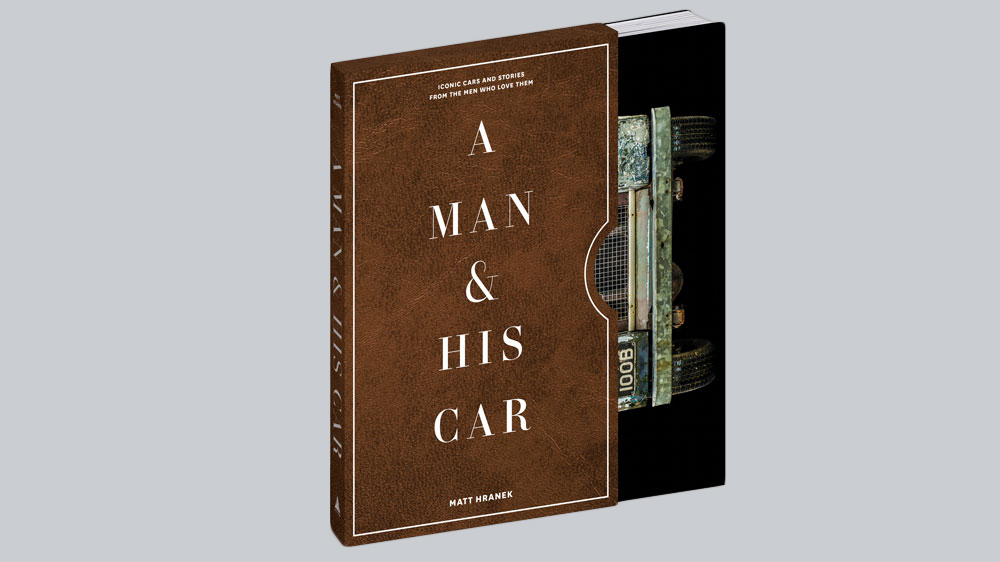 Back in October of 2017, Matt Hranek celebrated the publication of his first book, A Man & His Watch. True to its title, the volume captured the timepiece’s seductive nature through vignettes that focused on owners and the draw of their respective timepieces. With the work’s subsequent critical and commercial popularity, a follow-up publication was a foregone conclusion. But while the story of a guy’s wrist candy may be compelling, Hranek knew that tales about what’s parked in the driveway or garage had the potential to be truly epic.

Now, three years later, Hranek is delivering on that promise. Released on October 13, A Man & His Car explores the personal connection between an eclectic mix of gentlemen and their cherished rides, from celebrities to collectors to the everyman who fell fast and hard for a certain four-wheeler. The author, who is also the photographer, director and founding editor of WM Brown, recently shared with Robb Report what his inspiration was for the project, the selection process and whether he thinks the automobile’s allure will ever fade.

When did your love for cars develop?

Ever since I was a kid. It goes back to my dad, who was a car and motorcycle guy. He loved well-crafted machines. Whether they were little machines on your wrist or machines that went 200 mph, he was into it. But he wasn’t a gearhead; he was an aesthete, and I’m essentially the same character. I know how a car works, but I’m driven to the idea of the car, its aesthetic and design history.

What was your dream machine when you were younger?

My eyes dilated, my heart raced and I got sweaty every time I saw a [Porsche] 911. My mom owned VW bugs, and this was just a way sexier version of that car. Of course, I loved Ferrari and American Muscle, but it was the 911, the Porsche, that somehow just excited the car guy in me. It was the design, it was those awkward, exaggerated eyes, that rotund rear end. It had the potential to be very ugly, but it’s not. It all works.

When I was a kid, the poster on my wall was a 911, probably a 930 whale-tail turbo because I was a kid of the 1980s. Essentially, I now own my dream car. Would I like a [Ferrari] Dino or an Aston DB in the garage? Sure. But to have the one that I dreamt about as a kid be sitting in my barn right now is terribly exciting to me.

When did you first come up with the idea for A Man & His Car?

There was such uncanny success with the watch book, particularly in the eyes of my publisher, who thought it was a good idea but didn’t realize how it would resonate. They wanted to know what was next and I immediately, without hesitation, said: “It’s A Man & His Car. Very rarely do you meet guys who love watches but don’t love cars, that’s just the way it is. So that, to me, was a very natural transition. And, again, it started with my own story.

In your opinion, why is there such a strong connection between timepieces and cars?

I think if you break down the male psyche, there’s a connection between the aesthetics and what they mean—what a watch says about you and what a car says about you, and how you want that to be presented. Like, if I wear a Submariner because I have a fantasy that I’m James Bond or I think that I’m a Navy Diver, or drive a Jaguar because I imagine that I’m Steve McQueen—those things are very much in the male psyche.

The 1956 Jaguar XKSS once owned by Steve McQueen is now at the Petersen Automotive Museum.  Excerpted from A Man & His Car by Matt Hranek (Artisan Books). Copyright © 2020. Photographs by Matt Hranek.

What was the greatest challenge with this book?

I knew that I had to photograph this one because, logistically, it was just going to be a nightmare. We couldn’t just have cars sent FedEx to the studio, it was going to involve a lot of traveling. I had a 20-year career in photography and know how to photograph cars. I wanted them the way we see them, which is in daylight—we don’t see them under studio lights. And I wanted them in profile, front and back, not overhead. Designers aren’t thinking about how you see a car overhead, it’s about how you see it parked, coming at you and going away.

I also wanted to stay consistent with the graphics of the watch book, so I devised a mobile studio which, essentially, was this 30-by-30-foot, ripstop, black-nylon backdrop. Particularly challenging was having a $4 million car on it, the wind picks up to 35 mph and you now have a sail. It was comical. At the end of a year-and-a-half of schlepping it all over the world, I literally wanted to pour gasoline on it and burn it.

Describe the selection process for the vehicles included.

I would go to car shows and concours, and meet people on the street or run in to a neighbor, but I had to be interested in the car first, and then be captivated by the story. That’s where I would fall in love, and that’s when I knew if it would make the edit or not. For instance, I had access to any car in Ralph Lauren’s collection, but I didn’t want the Bugatti. I wanted the story that was the most personal and had the most connective tissue to the owner. And that just happened to be the [1971 Mercedes-Benz] 280SE Cabriolet. It was the family car that he bought when he got his first investment in the company.

And then for the Petersen Museum section, I was allowed in the archive and my head spun. There were all of these iconic cars that you remember as a kid, or saw in the movies and on television. I wanted a DeLorean, and they had the American Express 24-karat gold DeLorean. They have McQueen’s Jaguar and Magnum, P.I.’s Ferrari 308. Are you kidding me? I still want one of those cars because of the impression it made on me. The selection was very driven by my single point of view in terms of why I like cars. That was the only way it made sense to me. I apologize to the car community, I know I missed a million great stories, but I had to pick a lane.

Who surprised you the most, either at their participation or their story?

I sat down with Jay Leno and found him to be one of the sweetest, most generous characters. He tells me the story of his Buick Roadmaster, and how he found it in the PennySaver when he hit the ground in LA. He just made me laugh—it was guttural—and understand the intimacy of his interest in cars from his earliest memories.

And then there’s a lot of mortals out there that don’t have celebrity status but have a great love-affair story. When I talked to guys about their watches, it required a little bit of prompting and massaging in terms of getting that story out, because they really haven’t thought about it with that kind of intimacy. But car guys, they come out of the box with why they own it and how they chased it down all their life—they’ve been thinking about it for a very long time.

What is your current daily driver?

I’m a Land Rover guy. I’ve been driving some version of the Discovery for 20 years. I’m very much city mouse/country mouse, and they make that transition beautifully.

What do you look for in a car when adding to your collection?

First and foremost, its aesthetics. Second: What is the emotional reference point for it? We always ask the question in our family; “Are you in love with it?” That’s an interesting approach to objects, whether watches, art, cars, whatever. I’m not usually buying them for performance as much as what the reference point is to me, personally.

Is there a favorite car in your collection?

I have a very modest little group and always have one car in flux—sell one to buy one. But the 1987 Porsche 911 Carrera, that one is going nowhere. It is just an absolutely magical thing to have in my life.

If you could add any vehicle to your collection, what would it be?

If I had all the money in the world, I would have one of those little [Ferrari] Dinos. That’s probably why I like the [Ferrari] 308 as well, because it nods to some of that design. When I see those cars, I’m just blown away in terms of the simplicity and the story. That would be a dream come true.

Are you worried for the future of car culture?

I am not. I’m raising a 17-year-old daughter, and she is as mad about cars as I am. I do think the environmental impact of fossil-fuel burning will change things for the next generation. But there’s a guy making electric-engined Land Rover Series IIs and IIIs in Australia—people will always be attracted to the aesthetic of old cars.  As far as the sustainability of fossil fuel, who the hell knows? But, right now, it’s not impacting vintage car collecting.

A Man & His Car will be released on October 13. It is available for pre-order on Amazon now.