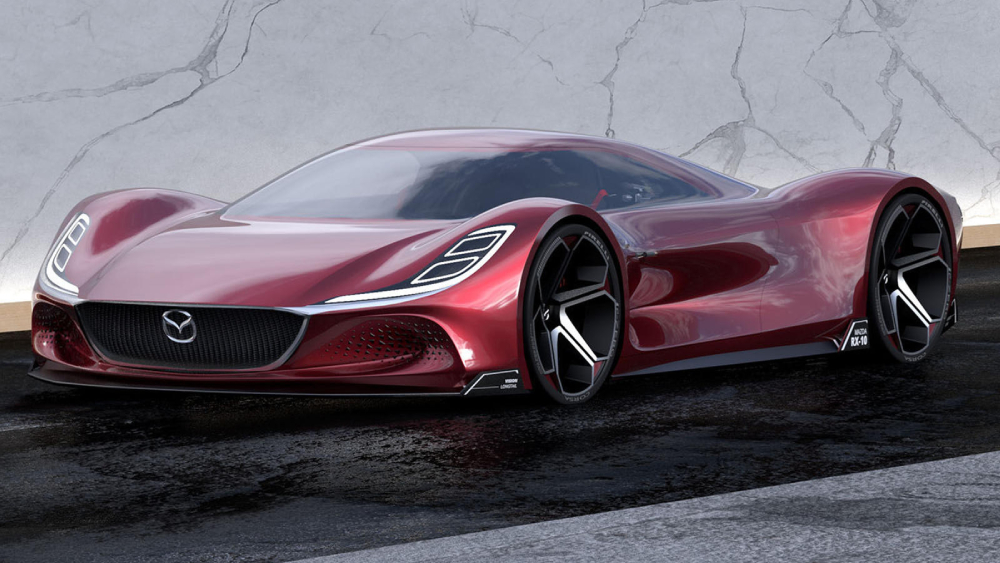 Mazda is teasing us again. The marque has just unveiled a stunning new hydrogen-powered car concept inspired by a Le Mans-winning race car.

Envisioned by Maximilian Schneider, an exterior designer at Mitsubishi Motors Japan, the RX-10 Vision Longtail is an unofficial offshoot of Mazda’s RX-Vision concept unveiled at the Tokyo Motor Show in 2015. That model gave fans hope that the automaker would build a rotary sports car to succeed the RX-8. Schneider riffed on those vehicles in addition to the McLaren F1 GTR that won Le Mans in 1995 and its Longtail follow-up––something especially apparent in the elongated rear.

Created with a low, wide silhouette, the RX-10 Vision Longtail has some trademark Mazda details, like the fine grille at the front. However, what’s under the hood is certainly not standard. Imagined with a mid-mounted 2.3-liter turbocharged rotary engine, it could theoretically produce 780 hp, but two smaller electric engines on the front axle can boost the car’s total output to whopping 1,030 hp. This means that its lightweight body––weighing just 3,196 pounds––can rocket from 0 to 62 mph in 2.5 seconds and reach a top speed of 265 mph.

Though street-legal, Schneider contends on his Instagram posts featuring the design that all of the car’s specs were calculated to qualify for Le Man’s Hypercar class. The company’s aesthetic KODO philosophy of design focuses on movement with unbroken lines, and it lends itself well to the streamlined qualities required by the race track.

There hasn’t been an official announcement of Mazda building a halo hypercar just yet, but it could be enough to push the company into manufacturing the long-awaited RX-9.