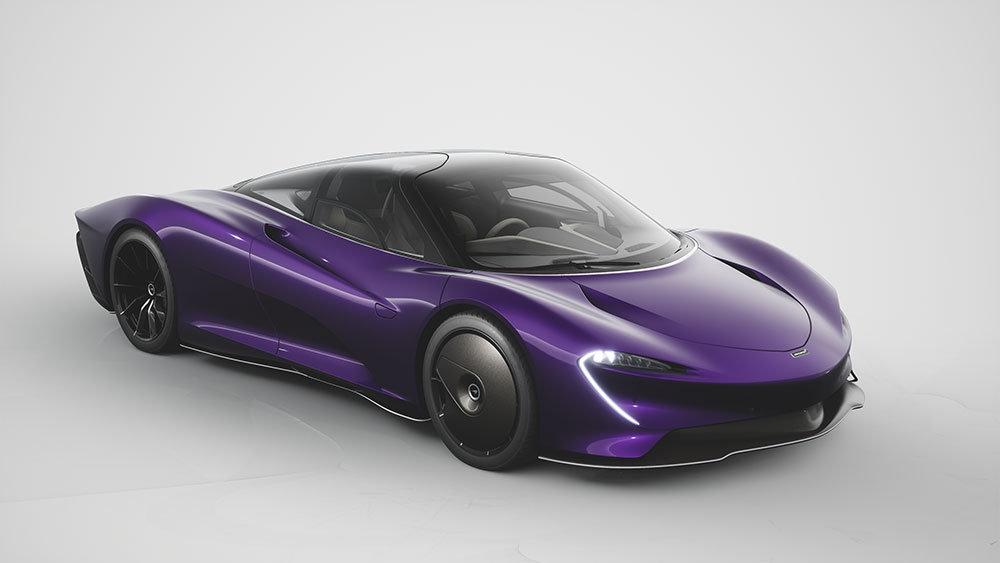 In the elite strata of the supremely wealthy, it’s not about what you possess. It’s about the experience you go through to acquire that item. That’s what McLaren CEO Mike Flewitt believes and, if you’re fortunate enough to be one of the 106 customers subscribed for the forthcoming Speedtail hypercar, that philosophy manifests as a secret James Bond-style lair nestled within the company’s Woking, England headquarters where your dream design specifications become a $2.6 million reality.

We didn’t get to visit that covert oasis within McLaren, though it’s rumored that you’d amble right past unless you knew it was there. A perfectly placed wave of the hand in front of a wall is required to unlock the hidden door, and only 10 Speedtail customers have been welcomed inside, commencing their journey to owning one of the most coveted McLarens since the iconic F1. But McLaren brought a bit of the design magic to Geneva during this year’s international motor show and let us design a Speedtail.

The conference room in Geneva’s Intercontinental Hotel contained plenty of glistening paint samples, sumptuous leather swatches, shimmering carbon fiber pieces and even a hefty platinum badge example, valued at around $56,000. It also housed a Speedtail, artfully spec’d by the master, Jo Lewis, McLaren’s head of color and material design for McLaren.  It’s under her exemplary eye and thoughtful guidance that any vision for the 1,035-horsepower, 250-mph, three-seater hybrid evolves into a finished custom creation—that is, after an initial three-hour consultation.

The conference room in Geneva’s Intercontinental Hotel contained plenty of glistening paint samples, sumptuous leather swatches, shimmering carbon fiber pieces and even a hefty platinum badge example, valued at around $56,000. It also housed a Speedtail, artfully spec’d by the master, Jo Lewis, McLaren’s head of color and material design for McLaren.  It’s under her exemplary eye and thoughtful guidance that any vision for the 1,035-horsepower, 250-mph, three-seater hybrid evolves into a finished custom creation—that is, after an initial three-hour consultation.

Lewis explained that the paint materials and finishes for every element of the Speedtail were defined ahead of the vehicle’s design, as each component informed the design. “Everything must have a reason for being included,” Lewis shared, citing one of McLaren’s chief design principles. “All vehicles are to be considered functional jewelry. What we make must be beautiful. The look and feel of the vehicle must match its purpose.” When crafting a future concours winner, bravery and innovation from the design department are requisites, as is considering how the vehicle will engage all the customer’s senses. “That’s rather specific to materials design,” Lewis said. “That’s an area where the owner can get emotionally connected to the car.”

When you’re handed various samples, it’s easy to get deeply invested in the outcome of your hyper grand tourer. It’s also overwhelming. For example, with the carbon fiber—a material McLaren’s renowned for pioneering in road cars—you can leave it stock or have titanium fibers woven in, and those can be 24-karat gold or champagne colored or any other hue. Likewise, when the leathers are presented, your head begins to spin. You can have traditional leathers, patinated leathers, or even leathers that are engineered by McLaren to add air to the substrate, making it 30 percent lighter, to keep with the overall lightweight story of the Speedtail. Of course, all of it can be dyed or painted any desired color. With myriad options, how’s one to know what the various configurations will look like?

Enter a gentleman manning several computer screens running software called Unreal Engine. He deftly combines various selections into a very realistic 3-D model within seconds. With limited time, journalists were batched into groups to collectively spec the Speedtail. Our quartet aimed at an aesthetic theme of “rockstar,” which entailed purple exterior paint and green and cream leather interior. A lighter grey carbon fiber was selected, and a bright white trim was applied to the edges of the carbon and some of the body panels.

The gentleman synthesized all of this into a rendering of our car within minutes. The finished vision indeed exuded the over-the-top ethos of a rockstar, but lacked cohesiveness and class, as evidenced by Lewis’s grimace upon sight of our creation. After a pause, she issued the perhaps harshest rebuke a British person could: “Ah, that’s certainly something.” (Another group of journalists drew the highest praise from Lewis—“Brilliant!”—after displaying a cream exterior over gold-infused carbon fiber with a maroon and cream interior.)

“It’s quite hard,” Lewis admitted afterwards, noting nearly all of McLaren’s customers exercise reasonably good taste during spec sessions. She could only recall one instance in which she had to politely steer a client away from a color. “He was so adamant and really ecstatic about it…and it was poo brown,” she laughs. “But that’s the thing about design and color; it’s so subjective.”

When McLaren first invited prospective clients to the unveiling of the Speedtail, it was in a swanky London hot spot, and all that was shown was a sketch of the car. Still, with only 106 vehicles available, a sizable amount of the individuals plunked down a six-figure deposit on the spot. Months later, when they were treated to sight of the actual vehicle, within seconds of removing the cloth to reveal the car, they already had ideas. “One told me he was doing orange,” Lewis shared, adding others inquired about how to port over specs of their P1s to the Speedtail. Another asked if he could buy the exact spec Lewis created, a light blue hue with a white interior.

What about when you’re not sure what you want? “We send an inspiration book,” Lewis explained. Before the holidays, Lewis’s team came up with 10 specs around various themes, bundled it all together in a beautiful package and shipped it off to customers. “They can get a sense of what’s possible, and when they come for the initial meeting, they can tell us ‘I love this theme, but I’d like to try this instead of that.’”

Some customers enter the lair with five ideas and leave the session still mulling it all over. Lewis’s aim is to help hone in on one or two so follow-up meetings can be more productive. “If they have a loose idea, we’ll help create a mood board and give them samples to consider. We try to always start with the exterior, and that’s really getting into carbon fiber and paint selection. If you can nail that down, it helps everything flow. The interior will be more harmonious if you’ve locked the exterior first.”

In this elevated circle, owners often know each other and sometimes will inquire about what others are selecting. Competitively, most want to surprise and dazzle so Lewis is careful to avoid sharing any identifying details, which is a delicate balancing act given that McLaren wants all 106 finished examples to be different. Based on some of the requests Lewis is fielding, that likely won’t be an issue.

“This vehicle costs £2 million, and it’s a chance to truly indulge in precious materials, befitting of such a car,” Lewis said. Accordingly, when one customer asked to include crushed diamonds in the paint, McLaren replied that wouldn’t be an issue, and will buy the diamonds, pulverize them and add the dust to the paint.

Another client loved a specific point in the day when the sun was setting over the dew-hewn grass at his vacation home in the Alps and sent a photographer to capture that precise moment. He asked for paint in that exact shade of the grass and McLaren matched it from the picture. Thankfully, Lewis doesn’t have to discuss the financial particulars for these bespoke pursuits. “We tell them anything is possible and figure out a way to make it so,” she said, “but our McLaren Special Operations division actually delivers the bill.”