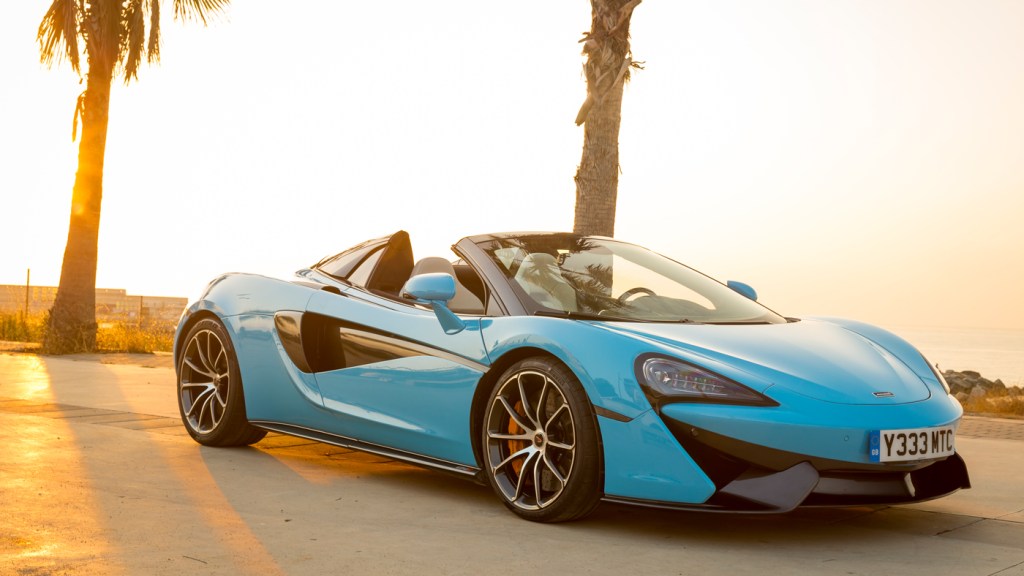 The invitation to travel nearly 6,000 miles for a day-and-a-half stay may sound more tedious than tempting. But when it’s an opportunity to drive the new McLaren 570S Spider in the surrounds of beautiful Barcelona, jet lag be damned. After all, if there was a better way to experience the British marque’s latest open-air arrow than cruising the sun-soaked Catalonian countryside, I certainly couldn’t imagine it.

A variant of the McLaren 570S coupe (which debuted at the New York International Auto Show in 2015), the convertible follows a GT version of the model and, along with the 540C, is part of McLaren’s Sports Series. The rear-wheel-drive rocket comprises a carbon-fiber tub covered with aluminum body panels, construction that contributes to a dry weight of 2,895 pounds—only 101 pounds heavier than its closed-top counterpart.

“From the waistline down, this is the coupe,” explains Ben Gulliver, McLaren’s head of vehicle development. “When you chop the roof off of a traditionally constructed steel- or aluminum-bodied car, it starts getting wobbly, and you have to add more reinforcements. The wonderful thing about our architecture is that the car could have been a spider from the very beginning since all of that reinforcement was already there underneath; we didn’t lose any stiffness. And the aerodynamics are so good that, with the roof up, we also didn’t lose any top speed.”

Bridling 562 horses, the mid-engine machine gets its kick from the marque’s 3.8-liter, twin-turbocharged V-8 that churns out 442 ft lbs of torque. Harnessed by a 7-speed seamless-shift transmission, the power train propels the vehicle from zero to 60 mph in 3.1 seconds as it races to a top speed of 204 mph (196 mph without the roof).

All of the technical specs, however, take a backseat when I first open the signature dihedral door and sit behind the wheel of an example dressed in Curaçao blue, one of three new color options in a selection that now runs 20 deep. Securely cradled in the leather six-way-adjustable driver’s seat, I survey the ergonomically designed cockpit and prepare for takeoff.

Before pulling away from the W Barcelona hotel with my driving companion, the first order of business is to open the two-piece composite hardtop, an operation that takes only 15 seconds and can be done at speeds of up to 25 mph. And top-down touring is de rigueur when taking in Barcelona, an urban gallery of masterworks from architect Antoni Gaudí.

Weaving through the culturally rich city’s wealth of tourist traffic, the spider proves equally at ease crawling around roundabouts and lingering in low gear as it does cruising missile-like on the open motorway. Fortunately, the route selected provides a quick escape from the Mediterranean metropolis and soon snakes along pristine provincial roads leading north toward the Castelltallat mountain range.

Driving the McLaren 570S Spider in the mountains outside of Barcelona.  Photo: Courtesy McLaren.

The spider traces the twisting, single-lane arteries with the precision of a laser printer’s stylus. Its seemingly intuitive handling is owed to a racing-inspired double-wishbone suspension (with steel springs and twin-valve adaptive dampers), electro-hydraulic power steering, carbon-ceramic brakes (able to completely stop the car from a speed of 62 mph in 105 feet), and Pirelli P Zero Corsa tires. Refining the responsiveness even further are three drive modes—Normal, Sport, and Track—along with Performance Traction Control and Electronic Stability Control systems that ensure rubber and road remain committed to each other despite adverse conditions.

Our midway point of the journey is the municipality of Lladurs and La Vella Farga, an 11th-century residence reimagined as a boutique hotel. Still a few miles out, the paved ribbon straightens, bisecting the bucolic fields at its flanks. With foot to floor and a few taps on the paddle shifter, I let the car catapult and witness its advanced aerodynamics in action. Among the definitive details is a rear spoiler that is almost a half-inch higher than that of the coupe, for increased downforce.

The McLaren 570S Spider, just as beautiful at the back.  Photo: Courtesy McLaren.

“Our strapline is that we make breathtaking products that visually describe their function, and the 570S Spider is really the epitome of that,” says Mark Roberts, McLaren’s head of design operations. “The actual form of the car guides and manages the airflow, splitting it at the front into the coolers and directing the high-energy air into the intakes in the sides. At the back, it has real echoes of the P1 and features an aggressive diffusor and a whole new carbon deck that has shades of the 650 Spider, as well.”

Navigating back to Barcelona, using the 7-inch Iris touchscreen, we never once take advantage of the 12-speaker Bowers & Wilkins sound system—the singular symphony of the engine is the only soundtrack needed. As we dance to the stop-and-go choreography of the mid-week commute, pedestrians and motorists alike surreptitiously snap photos of us, and it becomes clear that the McLaren even manages to stand out in a city celebrated for its own stunning design—Gaudí would approve.

The McLaren 570S Spider is priced starting at $208,800. Deliveries to the United States are set to begin in September.