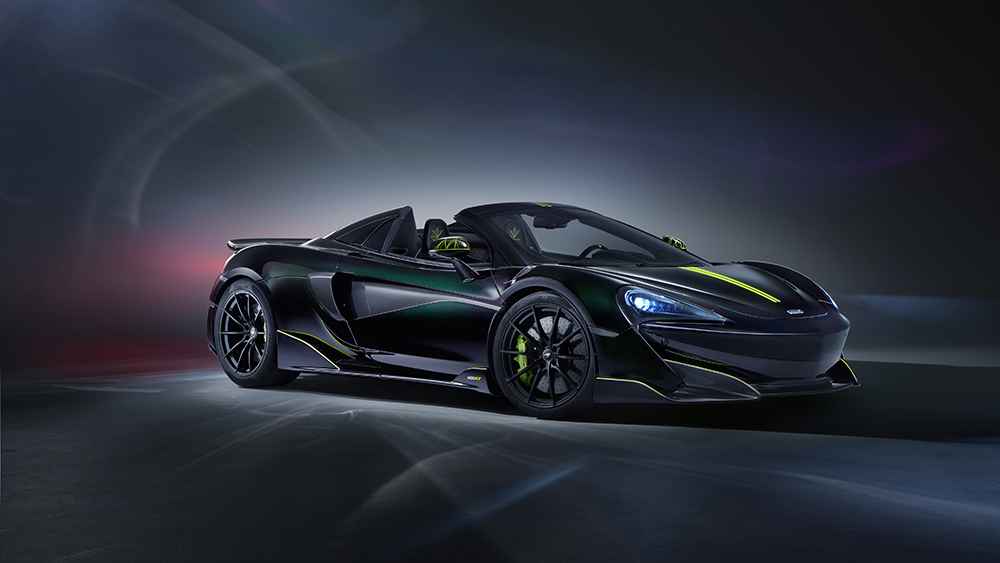 Just in case you thought the McLaren Spider 600LT wasn’t living up to its name, it’s now crawling with arachnid energy. The British marque has treated the final 12 examples to a limited-edition design theme directly inspired by the venomous Segestria Florentina spider.

Taking cues from the real-life arachnid, which is characterized by its iridescent black body, the car boasts a dark “Borealis” shell which shimmers through black, deep green, purple and claret as the angle of the light changes. This is contrasted by thin Napier Green stripes that run from tip to tail, as well as green pinstriping on the front fender, side skirt and rear diffuser vanes, all of which emulate the creepy crawly’s vicious green fangs.

To really hammer home the theme, McLaren has incorporated a web motif, which runs across the underside of the rear wing and the side-view mirrors in matching Napier Green. Elsewhere on the exterior, the brake calipers have also been finished in green while the 10-spoke wheels—why not eight?—have been colored gloss black.

Inside, it’s a similar story. The black carbon-fiber interior is punctuated by green stitching and spiderweb embroidery. Thanks to MSO’s Clubsport Pack, each car is fitted with carbon-fiber racing seats, along with a few other bonuses. Both inside and out, McClaren has managed to artfully toe the line between fun and elegant; it’s a childhood Spiderman fantasy reimagined for the modern gentleman.

In terms of performance, just like the horde of other 600LT Spiders, this model packs a 592-horsepower twin-turbo V8 and can scurry from zero to 60 mph in just 2.8 seconds.

The 12 limited-edition Spider Spiders arrived in the US this month and are now reaching the select retailers who will be offering them for sale for $275,500.