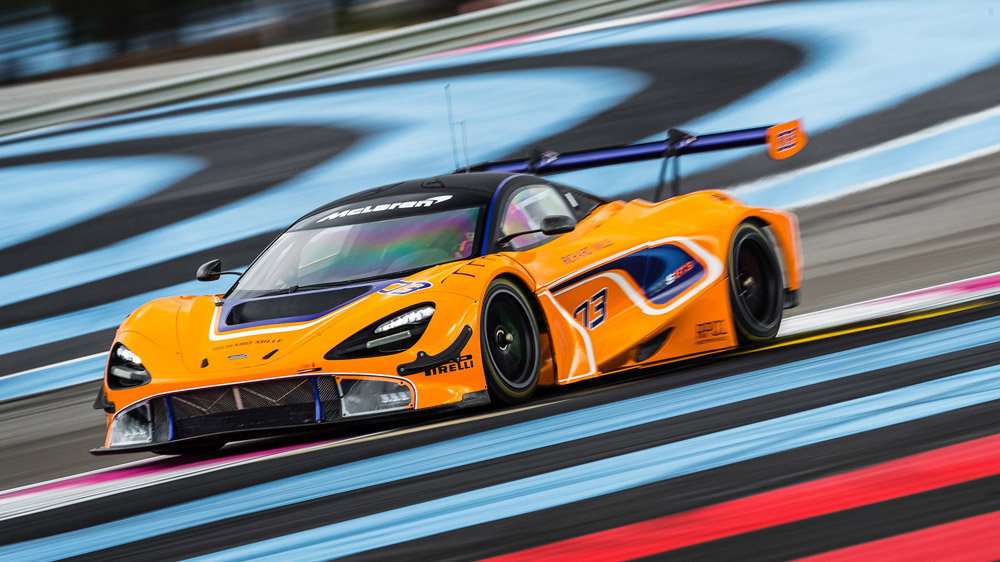 Tangible proof that McLaren is never happy with good enough took to the track on November 30 at the Bahrain International Circuit. Making its public debut was the British marque’s new 720S GT3, the first car designed and built by McLaren’s in-house motorsports department whose mission is to take customers racing.

The official unveiling for the 720S GT3 was at a Pure McLaren customer event at the track, followed by a public showing at the Bahrain GT Festival—all of which is a run-up to the machine’s first true test at December’s Gulf 12 Hours in nearby Abu Dhabi.

The GT3 variant of the already potent and pricey ($300,000) 720S—which puts out 710 hp from a twin-turbocharged V-8—is sure to take performance figures up a notch or three. Photos of the car show an even lower (if that’s possible) stance than the showroom model, along with a menacing wing, sculpted ground effects, and even what appear to be Lexan windows with small racing-style slots in the middle.

As for what’s under the hood and skin, so far McLaren brass remains mum on the upgraded specs. McLaren wouldn’t confirm pricing, but online reports suggest you should expect to pay roughly twice the price of the standard 720S for its racing sibling.

Company officials tell Robb Report that McLaren is working towards producing 20 GT3s within two years in order to meet homologation rules. And while customer deliveries are scheduled to start in the new year, there no details yet on who is set to get the first sets of keys. McLarens have long been raced by privateers, track beasts that they are, but the company decided to develop its own racing atelier in order to provide clientele with the support befitting of the marque, officials said. Interested parties should contact their McLaren dealer for details.

As far as the car’s competiveness in the motorsports arena, its team is likely to get more valuable telemetry and other 720S GT3 performance data from the Gulf 12 Hours, running from December 13 through 15. The lone vehicle is being entered by the in-house racing team and will be tested on the F1-ready circuit alongside a range of GT-worthy competitors from other marques.

The first race will be Gulf 12 Hours.  Photo: Courtesy of McLaren Automotive.

While this marks the first time McLaren’s racing-spec machine will be seen by the public, eagle-eyed track watchers across Europe may well have spied the car racking up thousands of track miles at myriad Continental circuits. Look for it at track near you in the coming year or two.