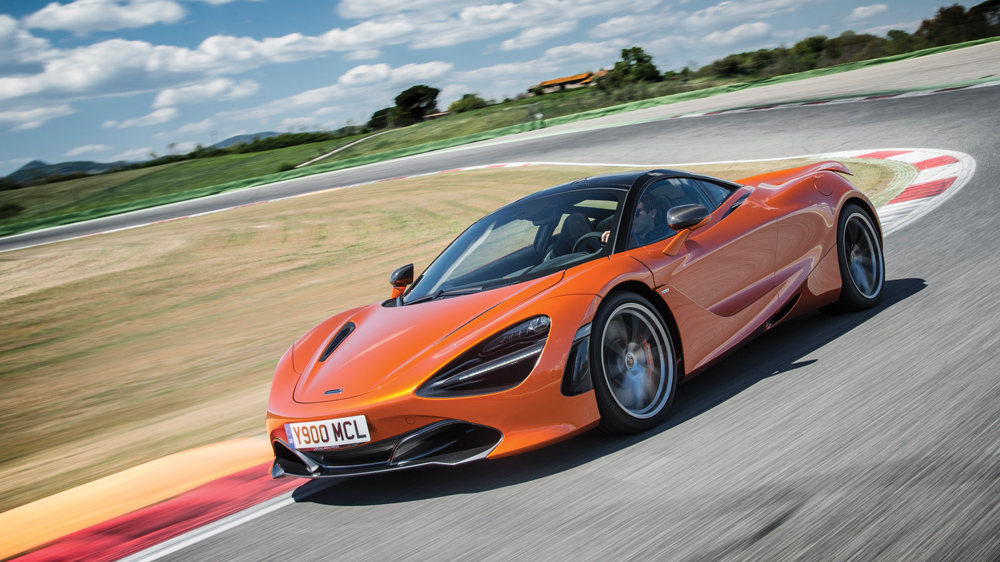 If you want to know how much horsepower a McLaren model’s engine produces, look to the car’s alphanumeric designation; it denotes the European rating. For the company’s latest supercar, the 720S, the number is big—bigger than that of any current road-going McLaren, now that the P1’s production run has ended. On the U.S. scale, the horsepower output is not quite as impressive: It’s only 710. The S stands for “super,” as in Super Series, which is positioned between McLaren’s Sport Series and Ultimate Series of models. But the nomenclature tells only part of the story on the 720S, which McLaren has priced at just under $285,000. This car is also a significant milestone because it’s the brand’s first true sequel since 2010, when the present incarnation of McLaren began producing road cars. It’s a design departure from the 650S, the model it replaces in the Super Series. The fluid, muscular shape of the 720S—with large air inlets around the headlamps, sinewy gills and character lines along the flanks, and swollen haunches formed by complex curves—makes the 650S appear restrained in comparison.

More notable is the significantly re-engineered platform of the 720S. According to McLaren, 91 percent of its parts are new, and they include the company’s second-generation carbon-fiber chassis, dubbed the Monocage II. The revised design makes it easier to enter and exit the car. It also improves the driver’s sightlines, enhances the car’s stiffness, and reduces the weight by 40 pounds.

The car’s body invited tactile interaction before I took it on a test-drive outside of Rome earlier this year. It begged me to caress it before I lifted the dihedral door and climbed in. In the cockpit is a vertical multimedia screen flanked by dials on the left and a curved lip on the right. Just below the screen are striated metal buttons for the 7-speed dual-clutch transmission. The interior is appointed with smooth leather, supple Alcantara, and matte carbon fiber.

The view through the rear window is significantly better than it is in the 650S thanks to the thinner carbon-fiber support structure. The cabin also seems airier because the tinted slats of Gorilla Glass over the driver and passenger seats allow additional light to enter.

The car’s twin-turbo 4-liter V-8 is a marvel. In addition to producing the 710 hp, it generates 568 ft lbs of torque. It features new turbochargers, intercoolers, pistons, and other components that help it deliver more output and greater fuel efficiency than its 3.8-liter predecessor. It also produces lower emissions. The engine and the aerodynamic efficiency, which doubles that of the 650S, enable the 720S to produce remarkable performance numbers: zero to 60 mph in 2.8 seconds and a top speed of 212 mph.

While test-driving the 720S on backroads near Rome, I encountered sketchy surfaces and what seemed like an endless parade of potholes. But the hydraulically adjustable suspension system offered surprisingly supple damping against these conditions. Though firm and controlled, it nonetheless coped with the roads’ irregularities, especially when I engaged the softest setting.

The engine responded crisply to throttle input, delivering a robust amount of torque at low revs. As the power plant wound its way up to its 8,500 rpm redline, the acceleration escalated with indefatigable thrust; long after I expected the engine to run out of steam, it kept on spinning. Straightaways were rare and short, providing opportunities to only glimpse the 720S’s capabilities. However, at the nearby 15-turn, 2.5-mile Autodromo Vallelunga Piero Taruffi racetrack, I was able to put the car through its paces.

I selected track mode, and the digital multi­function instrument panel rotated to reveal a simpler display of key information: engine speed, vehicle speed, and gear position. When I buried the throttle, the electronic differential routed torque to the rear wheels, which were shod with optional Pirelli PZero Corsa tires. Their sticky compound made it easier for the car to adhere to the track. The 720S is equipped with carbon-​ceramic brakes providing such intense stopping power that they encourage faster driving on the track. The brakes are aided by a rear spoiler that acts as an air brake during hard stops.

As noted earlier, the aerodynamic engineering inherited from the P1 produces twice as much downforce as the 650S did. The traction-control system manages to transfer power without significantly penalizing you for lead-footed throttle application.

At speed, the 720S feels significantly more flexible and composed than the 650S, allowing you to be more aggressive. Feeding that instinct is McLaren’s new Variable Drift Control setting, which features an on-screen graphic of a 720S to help you visualize how much slip angle the system will permit. Drag the car graphic sideways, and the computer allows more dramatic slides. While the software works as advertised, McLaren warns that it is intended to build confidence by gradually loosening the vehicle’s electronic reins; it’s not supposed to encourage exhibitionistic slides.

The 720S also incorporates an updated track-​telemetry system. The feature uses an onboard app to record detailed performance data that you can compare against other laps. When equipped with the optional three-camera setup, the system provides a video recording of your performance—your heroic maneuvers and your gaffes.