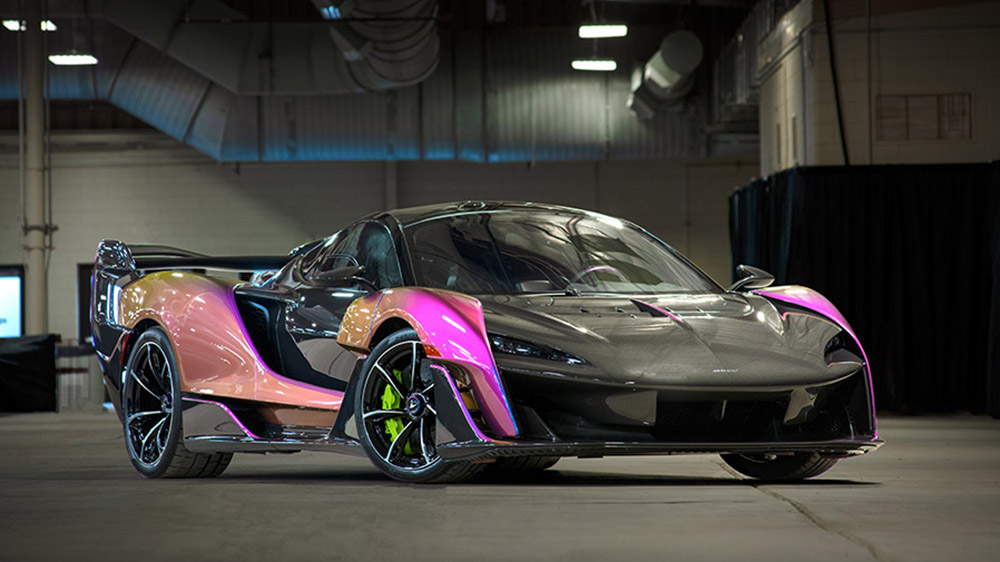 The McLaren Sabre may be less than two years old, but it’s already set to make a splash on the secondary market. A gorgeous example of the one-of-15 supercar just posted for private sale by Barrett-Jackson. There’s much more to the vehicle than it’s exclusivity, though. It’s also a beastly speed machine with a bonkers color-changing paint job.

The Sabre, which debuted in December 2020 for the 2021 model year, is the handiwork of the British marque’s bespoke division, McLaren Special Operations (MSO). An exclusive for the US market, the vehicle looks similar to the $2.25 million Speedtail hybrid but with a bunch of new aerodynamic elements, including a front splitter, side skirt, more angular fenders and a central fin that connects to a giant rear wing.

The owner of this particular example worked directly with MSO to design the hypercar of their dreams. It has a carbon-fiber finish that’s accented with striking “Pacific Colour Stream” elements, and features iridescent paint that changes color depending on your angle. (Crack open the dihedral doors and you’ll see hits of iridescence inside the cabin as well.) Although Barrett-Jackson hasn’t identified the seller, these panels, and the subtle “03” numbering on the front and sides of the car have led some to believe it’s the same Sabre that YouTuber Shmee 150 reviewed last year.

Unlike the Speedtail, the Sabre is a purely gas-powered vehicle. In the engine bay you’ll find a 4.0-liter twin-turbocharged V-8. The mill is connected to a seven-speed dual clutch transmission that sends power to the rear axle and generates 824 horses and 590 ft lbs of twist. It can also reach a top speed of 218 mph, which makes it the brand’s fastest two-seater.

Inside the Sabre  Barrett-Jackson

Barrett-Jackson hasn’t revealed the car’s price, so you’ll need to reach out to them for an official quote. Since it has only 193 miles on the odometer and looks to be in impeccable shape, we’d be surprised if the owner is asking for anything less than the car’s original $3.8 million sticker price. Either way, the sale will tell us a lot about the value of the Sable on the secondary market.