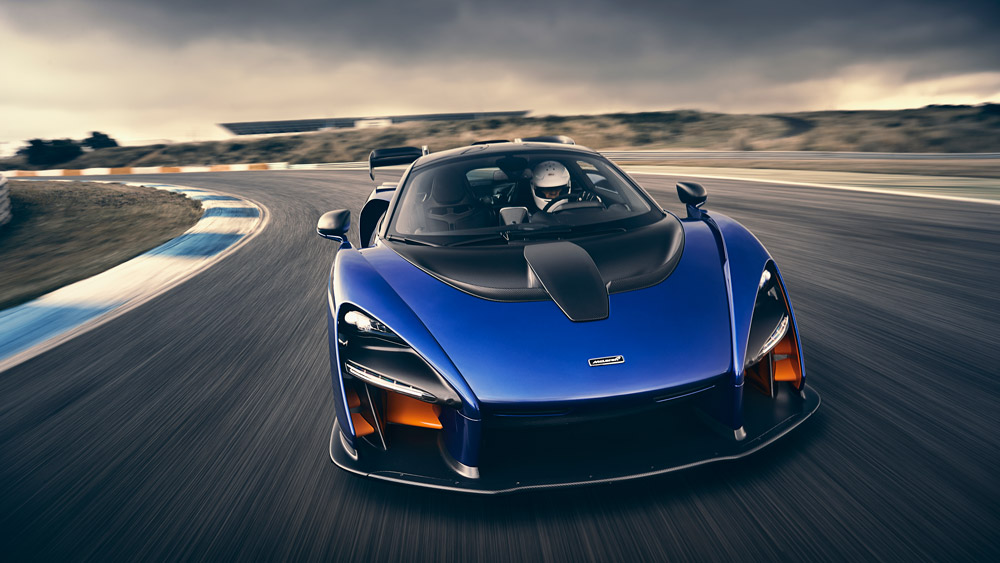 In 1994, the Italian Grand Prix fell on May 1, which also happened to be my birthday. What appeared to be the makings of a doubly joyous Sunday became irreparably seared into my memory when Brazilian driver Ayrton Senna, hero to myself and countless others, started the race in pole position but lost his life on lap seven at the Imola circuit’s Tamburello corner.

Nearly a quarter-century later, I find myself at the Estoril circuit near Lisbon, Portugal, for the launch of a supercar that bears the name of the legendary racer: the McLaren Senna. Ayrton Senna earned his first Formula 1 victory here in 1985, and wicked winds are whipping the 2.59-mile track today. Estoril bears the visible weight of the intervening years: Exterior surfaces are heavily patinated; the ancient grandstands are sunburnt and peeled; and a granular, abrasive tarmac betrays decades of neglect and natural erosion.

The car I’m here to evaluate presents a similarly brutalist and unsentimental—yet thoroughly modern—aesthetic, motivated by a twin-turbocharged V-8 that produces a startling 789 hp. It is, according to McLaren, as relentlessly uncompromised as the legendary Brazilian was reputed to be. It also has a face only a wind tunnel could love: Its nose, comprising twin spears buttressed by thin pillars, seems to exist for no other purpose than to route air through the body with maximum aerodynamic efficiency. The mid-flank of the body lacks the sensual design language of the British marque’s 720S, instead appearing to have been sliced by a straightedge and then bisected by gaping vents and ducts. The tail tapers into what might be the Senna’s most imposing visual feature: its massive rear wing.

The Senna’s power-to-weight ratio is extreme, and its performance figures are brutal—zero to 60 mph in 2.7 seconds, and a top speed of 208 mph. But numbers don’t tell the whole story, since no spec sheet can prepare you for the gut-punching, rib-cage-jarring experience of piloting such a track-focused beast at speed on a closed circuit. My session started behind the wheel of a McLaren 720S for sighting laps, an undeniably capable car with remarkable acceleration and outstanding handling. The 720S proved predictably quick and nimble, helping stimulate my memory of the track’s twists, elevations, and camber changes. But climbing into the Senna dispatched a dramatically different visceral experience.

While the doors open dihedrally like the 720S, upward and outward for ease of entry, they reveal a far more purposeful cabin that has been alleviated of niceties like leather and soft trim. The seats are a rigorous exercise in minimalism, with a single layer of carbon fiber sculpted into an elegant, body-hugging form. Thin sections of padding are added as perfunctory comfort measures, while so-called touring seats can be ordered with a slightly thicker layer. Though a portion of the roof panel lifts away with the door, climbing into the Senna still results in an awkward plop due to the deep bucket shape of the seats. But once settled in, I found they provide a snug, focused point from which to command the jaunty hypercar. Surprisingly, the doors on my tester car seal themselves shut with a soft close more commonly found in two-ton luxury sedans.

Though fully aware of the Senna’s power and weight advantages over the 720S, my first dip into its enormous wells of performance kicks the tail out dramatically—partially because the Senna produces a spry 516 ft lbs of torque at a scant 3,000 rpm, but also because the bespoke Pirelli P Zero Trofeo R tires have yet to reach their optimal operating temperature. A tad daunted by the unplanned sideways sally, I tiptoe my speed back with caution, it increasing again as the Senna’s tires warm up. As the sticky Pirellis get up to temperature, the thin-rimmed steering wheel reveals a surprising amount of information about tire grip levels; though steering effort is relatively light, it’s easy to discern when the front wheels are biting into the tarmac and when I’ve entered a corner too hot. Though McLaren uses a brake vectoring system to help rotate the car and reduce understeer, the onus is still on the driver to properly transfer weight while braking into the corner and accelerating out of it.

The Senna can surge to 208 mph.  Photo by Beady Eye, courtesy McLaren Automotive.

Because McLaren’s track rules dictate that we drive in Race mode but not engage the stability control’s Dynamic or Off settings, the Senna feels unusually tidy and controlled in corners for a nearly 800 hp car, especially with the transmission set to automatic. Though the sensation of power is tremendous when summoned in a straight line, the gearbox doesn’t seem to always select the lowest, most aggressive gear in corners, which has the effect of reducing the amount of potential wheelspin. Switching to manual gearshift mode reveals an entirely different animal: By controlling the gear selection myself via the paddle shifters, I’m able to modulate the throttle more closely while exiting each corner. That finer level of control allows me to incrementally slide the tail out and carry higher speeds, though I suspect using the Dynamic stability control in automatic transmission mode might offer a more optimal combination. The beast, once constrained and controlled, becomes wild and irascible.

The sensation of downforce is especially palpable when rounding the track’s final corner. There, the Senna maintains its grip on the tarmac while pulling strong lateral g forces as I open the steering and allow it to pass over the curbing. I hold the throttle coming out of the corner, and the Senna’s acceleration keeps pulling harder as the car barrels down the 3,200-foot straightaway. It’s a battle of wills as I approach the end of the straight; at an indicated 177 mph, my instinct tells me to brake at the 300-foot marker. However, the professional racecar driver riding shotgun suggests I brake later—a full 100 feet later—which I’m reluctant to try the first time around. A firm stab of the left pedal yields shockingly strong deceleration as the Senna scrubs off a remarkable amount of speed before the right-hander, leaving me an embarrassingly long stretch of straight tarmac before I turn the wheel. Later it is.

The Senna’s acceleration, cornering, and braking capabilities in particular are so far beyond McLaren’s other road car offerings that it takes several laps to acclimate to its elevated levels of performance. The mental recalibration required is intense. The car is so single-minded in its purpose that it requires an entirely different visual and mental processing speed than what most drivers are accustomed to. After a second lapping session, the Senna’s abilities become more quantifiable, but the pace also increases along with my confidence level. Perhaps this is why McLaren has allowed only two driving stints and not permitted use of the least restrictive levels of stability control. Confidence can quickly lead to overconfidence, which can, well, lead to disaster.

The Senna’s visual personality takes on a different timbre on the track, where its controversial appearance punches a startlingly futuristic shape through Estoril’s faded corners. Its alien proportions and unapologetic physiognomy skip any pretense of gentility or elegance, which seems like an entirely appropriate tactic for the racetrack, where function rules over form with emotionless rigor.

A closer look reveals the totality of the Senna’s commitment to lightweighting: If you’re looking for metal or plastic bits, you’ll be hard-pressed to find any. Lightweight construction has been ruthlessly exploited, sacrificing noise insulation and refinement for heightened performance. Carbon fiber is extensively employed throughout, from the Monocage III chassis to exterior body panels, some of which weigh as little as 1.4 lbs apiece. While the 720S’s doors weigh approximately 55 lbs each, the Senna’s tip the scales at a mere 21 lbs, with further weight savings available when optioned with transparent panels constructed of Gorilla Glass. And although features like air conditioning, GPS, and Bluetooth come standard, they can be deleted at no cost for further weight savings, culminating in the Senna’s remarkably wispy dry weight of 2,641 lbs—the lightest McLaren ever, save for the legendary F1.

Arguably more crucial than its power-to-weight ratio is the active aerodynamic system, which adjusts the front ducts and rear wing to manage the balance of downforce based on steering angle and vehicle speed. While the front ducts operate out of sight, telemetry footage of the rear wing reveals a spectacular visual show, using hydraulic pressure from the gearbox to deftly alter its height and angle of attack in anticipation of aerodynamic needs. The wing weighs only 10.7 pounds but is capable of producing a staggering 1,763 lbs of downforce at 155 mph.

In final analysis, my brief but intense time behind the wheel of the Senna produced the curious effect of warping my perception of performance while attempting to evoke a poignant page in racing history. Employing the name of one of the greatest racing drivers of all time might recall the heyday of the early 1990s—a time when the world was dazzled, then eventually devastated by, the enigmatic energy of Ayrton Senna.

But then again, a name is just a name. What separates the McLaren Senna is not its evocative moniker but the staggering achievement that makes this street-legal road car not far off the performance benchmarks of Ayrton Senna’s F1 cars, which famously diced alongside rivals at Estoril while approaching speeds of 190 mph. The Senna offers a sobering prism of history, at once shockingly modern and retrospective, blending the contemporary wizardry of power and aerodynamics with a nod to an era in motorsports that will never return.

Senna the car and Senna the man are separated by the march of time and the inexorable creep of technological progress. And while McLaren is quick to remind us that the link between the two is more philosophical than literal, the legendary Brazilian did score 35 Formula 1 wins and three driver’s titles with the marque—remarkable achievements that speak to the partnership’s winning combination of grit and aptitude.

“You commit everything to such a level where there is no compromise,” Senna once insisted. “You give everything you have—everything, absolutely everything.” That unrelenting ethos is indeed translated through the car’s extreme lightweighting and race-focused demeanor.

But while enthusiasts may debate whether Ayrton would have approved of his name being slapped on a high-dollar exotic without his input (unlike his famously hands-on development work with the Acura NSX in 1989), skeptics can at least be assuaged by the fact that McLaren auctioned off the Senna’s final build slot for $2.67 million, donating the proceeds to the Ayrton Senna Institute, which aids underprivileged children in the racer’s native country.