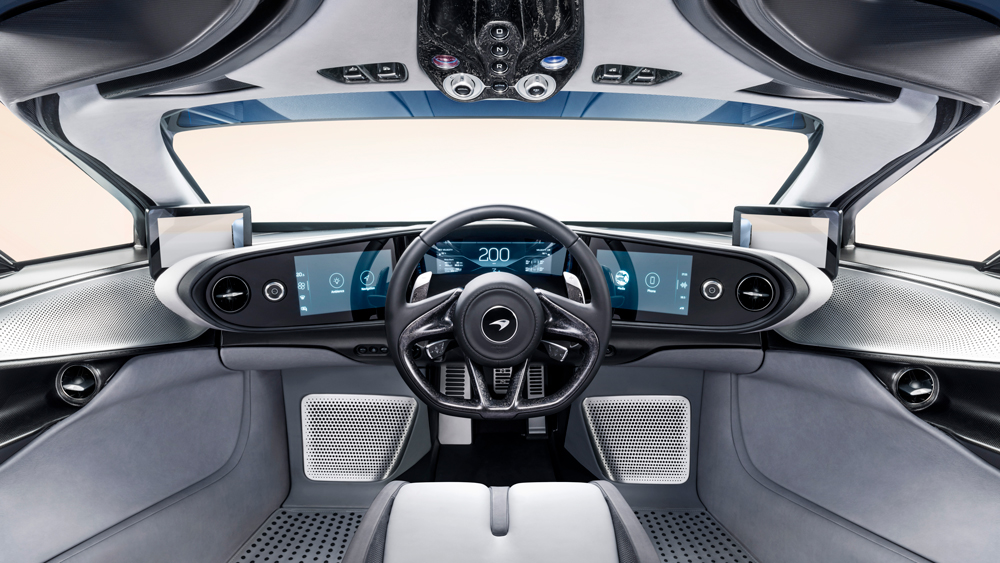 Anticipation for McLaren’s new hypercar—or Hyper-GT, as the marque likes to refer to it—has been building since its first teaser images were released back in March. The latest model in the Ultimate Series, following the P1 and the Senna, the camera-shy Speedtail has finally stepped into the spotlight.

Sporting an unabashedly futuristic design, the car is awash in aggressive lines that make it look like it should get a speeding ticket even when standing still. Its monocage body is crafted from lightweight carbon fiber and designed with aerodynamic optimization in mind. In fact, its designers were so obsessive about reducing drag that they replaced the usual sideview mirrors with low-profile retractable cameras that provide a real-time feed to screens in the cockpit. The aerodynamics are further refined by the inclusion of twin active rear ailerons—which are not separate panels, but rather a part of the body that bends open thanks to the flexibility of carbon fiber—and static carbon-fiber front wheel covers to reduce turbulent air around the wheel arches. And of course, its overall tear-drop shape was designed with drag diminishment in mind. All of these factors work together to make the Speedtail the most aerodynamic car McLaren has ever produced.

Did we mention that it’s also the fastest? Topping out at 250 mph, the Speedtail is powered by a hybrid-electric power-train configuration that generates a combined 1,035 hp. The power-to-weight ratio (the car weighs just 3,153 lbs) and instant torque provided by the electric motor gives it blistering acceleration that can propel the car from zero to 186 mph in 12.8 seconds. To handle this incredible speed, the Hyper-GT rests on Pirelli P-ZERO tires that were developed specifically for it.

Recreating the feeling of driving a racecar, the pilot sits in the center of the cockpit flanked by two recessed passenger seats. The interior is surrounded by glass panels that let in plenty of light, though the use of electrochromic glass on the upper section of the doors, the porthole above the driver’s seat, the rear-quarterlights, and the upper portion of the windshield allows the occupants to instantly turn them opaque at will. In the case of the windshield, this obviates the need for sun visors, adding to the sleek look of the interior. The seats are clothed in a lightweight leather that weighs 30-percent less than standard leather, and nearly every function in the car is controlled by touchscreen interfaces rather than buttons and switches.

For the owner that really wants to show off, 18-karat gold and carbon-fiber McLaren badging is also available. The Speedtail will be limited to 106 examples—the same as the number of McLaren F1s sold—and, unfortunately, all of those vehicles have already been sold. Deliveries will begin in 2020, so it will be a wait before you have a chance to see one of these beasts in the wild.