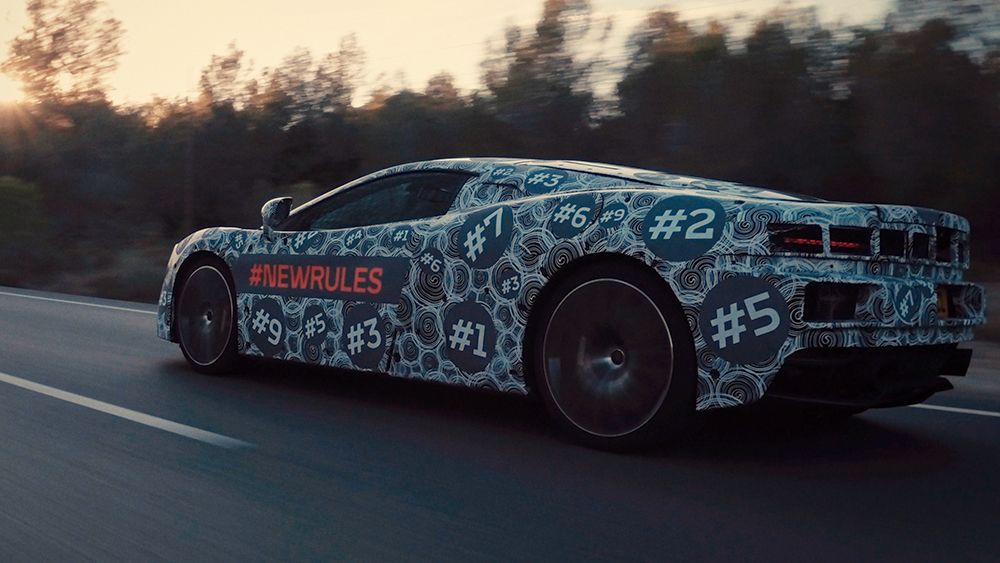 McLaren Automotive has only been producing supercars for the public with regular frequency for about a decade, and all of them have been remarkable hits. Now, the crew at Woking have set their eyes on dominating a new market segment: grand tourers. Today at the Geneva Motor Show, McLaren Automotive CEO Mike Flewitt debuted a teaser video of a completely new car that’s aimed at snagging customers away from the likes of Ferrari, Bentley, and Aston Martin.

Grand touring McLarens aren’t precisely new ground. The first foray was the 570GT, a tamed version of the 570S, and last year came the Speedtail, a three-seater grand tourer that can hit 250 miles per hour and perhaps rearrange your face when you mash the accelerator. This new mid-engined steed—no name yet assigned—will have more power than the 570GT and likely use a variant of the bi-turbo V-8s that McLaren so artfully produces, though it won’t be hybridized.

“If you look at GTs from the ’50s, they were high-performance, with lightweight, beautiful bodies, but comfortable to drive long distances,” says Joylon Nash, executive director, global sales and marketing for McLaren. “Today the GT category has strayed a bit. The cars are luxurious and comfortable to drive, but very heavy and not great, dynamically. We see the the opportunity to provide a luxurious, easy-to-drive car that handles like a McLaren.”

Nash was tight-lipped about the particulars, but did note about 70 percent of the forthcoming model will be entirely new, and hinted it could use a wholly new powerplant as well and that the power-to-weight ratio will be class-leading. “The drive train has been engineered specifically to provide a GT experience. We’ll be drawing from the Speedtail for some inspiration,” he said, adding the suspension and steering have been tweaked for grand touring as well. “You want road communication like any good McLaren,” he said of the wheel feel, “but less busy and more relaxing. But it certainly won’t be numb.” Expect a price point around the 570S, so about $215,000 to start.

This opens the door to inquire about what else is downfield on McLaren’s product roadmap, given that the company has been vocal about its Track 25 initiative—to launch 25 new vehicles by 2025. “We made 4,800 cars last year and by 2024, we should be at 6,000 cars per year,” Nash shared. You’d likely be correct to assume that the since the new grand tourer falls into a completely new segment within McLaren’s architecture—not a Sports or Ultimate or Super Series—more grand tourers will follow, perhaps with something slotted in between this next model and the Speedtail. And Nash admits a two-plus-two is within the realm of possible. “The design has to have a purpose. It has to be functional as well as beautiful, and it has to have our DNA, which means it’s exciting to drive and engaging,” he says.