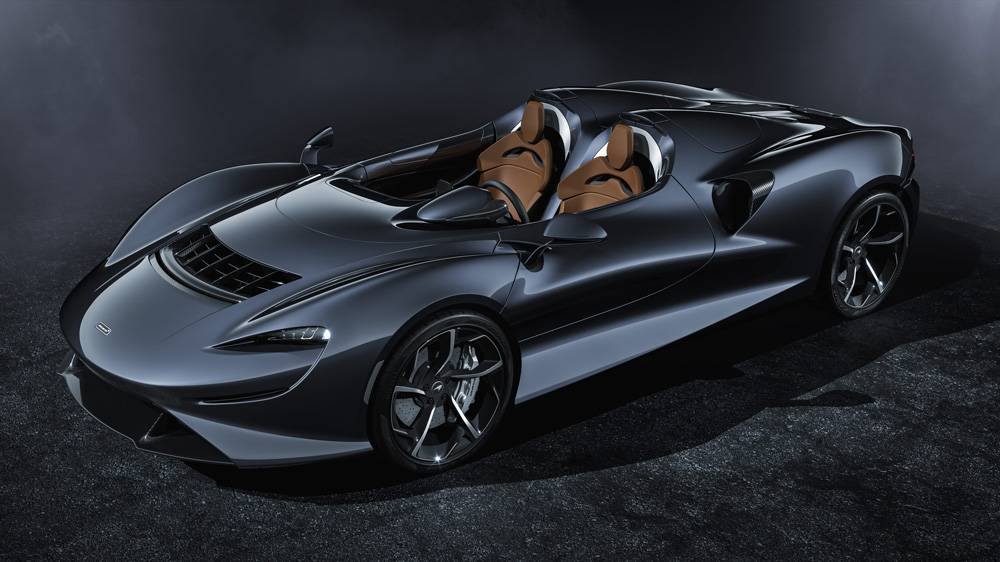 McLaren Automotive is unleashing its most extreme, most ferocious, most intense Ultimate Series hypercar ever.

The sensational, all-new McLaren Elva is a full open-cockpit projectile, powered by a thundering 804 hp, twin-turbo V-8 that will catapult it from standstill to 60 mph in less than three seconds.

And the really good news is that, despite its race-car-like no-screen cockpit, the Elva is homologated as a road car, not just a track missile. Total global production will be limited to just 399 examples, with the price starting at $1.69 million. The first cars will meet their new owners towards the end of 2020.

McLaren history buffs will remember the Bruce McLaren-designed, superlight McLaren-Elva M1A from the 1960s. Back then, Elva Cars was a tiny British marque that McLaren commissioned to build customer versions of its super-successful M1A racer. For trivia lovers, it was a gold McLaren-Elva M1A that Elvis “drove” in the cheesy 1966 movie Spinout.

With the Elva, McLaren takes its obsession with weight-savings to new levels. Here is the lightest McLaren road car ever, featuring a new, bespoke carbon-fiber body and chassis, and lightweight materials throughout.

To deliver an open race-car experience, there’s no roof, windshield, or side windows. But to avoid the need for a helmet, McLaren engineers have come up with what they claim is a world-first—its Active Air Management System (AAMS) that’s designed to redirect air flow over the cockpit.

The system sucks in air through a central opening in the grille and directs it, at high velocity, out through a hood-mounted vent, creating what McLaren describes as a “bubble of calm.”

When the AAMS is active at higher speed, a carbon-fiber deflector (just in front of the outlet) automatically rises 5.9-inches to create a low-pressure zone at the vent. This helps redirect the air in a 130-degree arc over, and alongside, the cockpit.

Not entirely convinced of this fighter-jet lesson in air-flow management? McLaren will happily equip your Elva with an optional fixed windshield. Wipers, however, are not included.

Small, single-hinge dihedral doors scissor upwards for easy entry and exit, or you can simply step-in over the doors.

The Elva with optional windshield.  Photo: Courtesy of McLaren Automotive.

McLaren has designed new, superlight, all-carbon bucket seats for the Elva, trimmed with a choice of either full Aniline leather—with a special protective coating to fend off the elements—or a new material called Ultrafabric, a breathable synthetic that’s more durable and moisture-resistant, and grips you tighter in the seat.

While there’s no roof being offered, it seems there’s not even a tonneau cover to protect that fancy cabin and pricy electronics in a sudden downpour. Hopefully, McLaren’s Special Ops division—or a local boat canvas shop—should be able to come up with a solution.

Powering this featherweight projectile is a howling 4.0-liter twin-turbo V-8 from the same family of engines used in the Senna and Senna GTR. It packs a massive 804 hp and 590 ft lbs of punch with all that muscle going to the rear wheels through a seven-speed seamless-shift transmission.

Dial-up launch control and McLaren claims the Elva will lunge from zero to 124 mph in just 6.7 seconds, making it quicker to that speed than the iconic Senna.

What McLaren isn’t revealing is the car’s top speed, which will likely be restricted only by the driver and passenger’s tolerance to buffeting.

Fully active suspension with Adaptive Dynamics Controls offers the choice of Comfort, Sport and Track modes, though the driver can also control the amount of wheel spin and oversteer through three Electronic Stability Control modes. And then there’s Variable Drift Control when you’re in the mood to play sideways hooligan.

The roadster rockets from zero to 124 mph in 6.7 seconds.  Photo: Courtesy of McLaren Automotive.

When you need to stop in a hurry, the Elva gets what is claimed to be the most advanced braking system ever fitted to a McLaren road car. Developed from the Senna’s set-up, it features unique, sintered 15.4-inch carbon-ceramic rotors—lighter and stronger than conventional carbon-ceramic discs—along with lightweight titanium caliper pistons.

Like McLaren’s other high-profile Ultimate Series hypercars—the P1, Senna and Speedtail—this Elva is guaranteed to become an instant classic. But whether McLaren faithful will rush into investing $725,000 more than a Senna on a roofless, windowless rocket will be fascinating to see. We suspect they will.