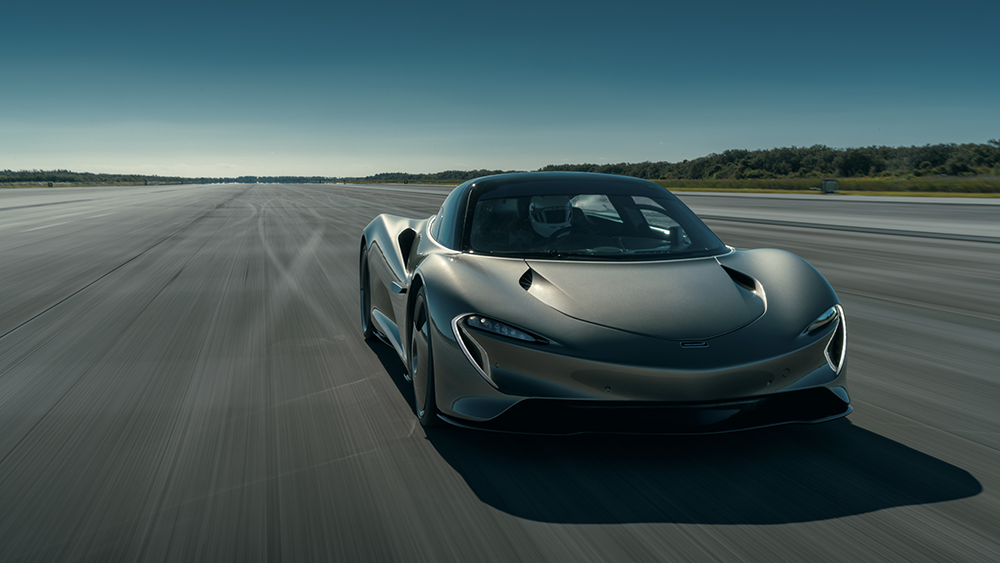 We’ve been drooling over McLaren’s Speedtail since the first teaser images were released back in March 2018. Now, the hybrid hypercar is finally hightailing it into production after punishing the tarmac during a series of high-speed test drives.

On Monday, the British marque announced the prototype Hyper-GT reached the eye-watering speed of 250 mph more than 30 times during a recent test at the Kennedy Space Center. With legendary Indianapolis 500 champ Kenny Brack behind the wheel, the Hyper-GT rocketed down the 3.5-mile-long runway which was originally built for space shuttles to land on but has since become a site for automotive development, competitions and a place where hypercars can strut their stuff.

The Speedtail’s top speed shattered the 240.1 mph set by the McLaren F1—which was crowned the world’s fastest car in the ‘90s and currently holds the title for the fastest naturally aspirated vehicle—but to reach it, drivers will have to engage a Velocity mode which retracts the side mirror and lowers the ride height by 1.4 inches. It’s a small price to pay to be the fastest supercar on the streets.

Now that the Speedtail’s world-wide test runs have concluded, the production of the first customer cars can finally kick-off. Only 106 will be built in total to match the production run of the McLaren F1.

To recap, the Speedtail has been touted as the most aerodynamic and fastest McLaren to date—and it’s certainly living up to expectations. It’s powered by a hybrid-electric power-train configuration that generates a combined 1,035 hp. The power-to-weight ratio plus the instant torque provided by the electric motor gives it blistering acceleration. In fact, the Speedtail can soar from zero to 186 mph in 12.8 seconds. Moreover, the car’s clever bodywork includes active aerodynamic elements that can be set to a low-drag configuration for maximum speed.

The first customer model of the Speedtail is now being hand-build at McLaren’s headquarters in the town of Woking in the United Kingdom. Deliveries of the $2.6 million vehicle are due to commence in February 2020.