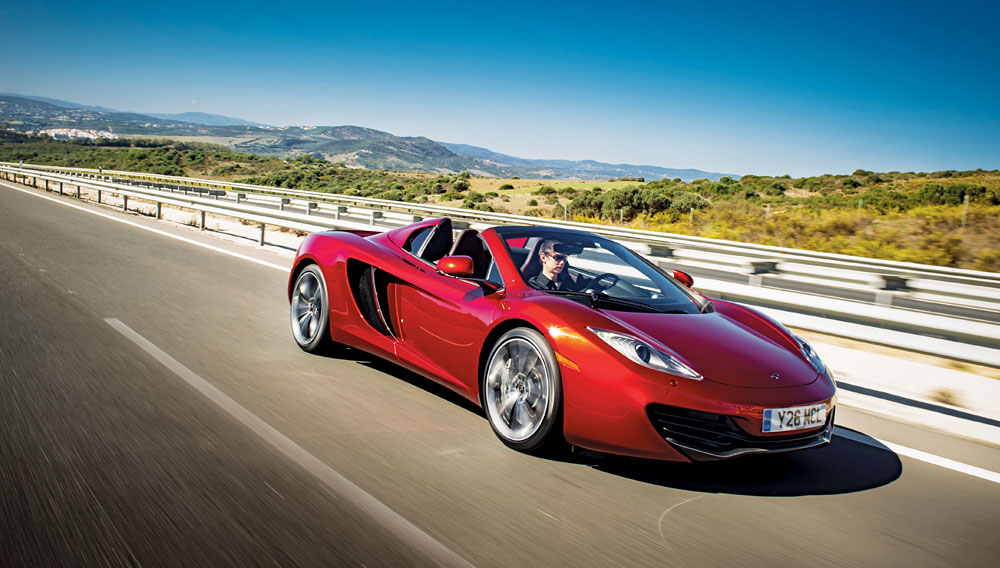 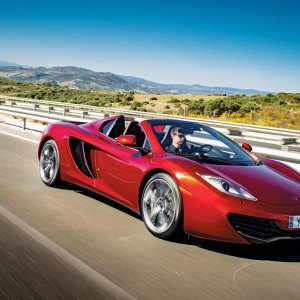 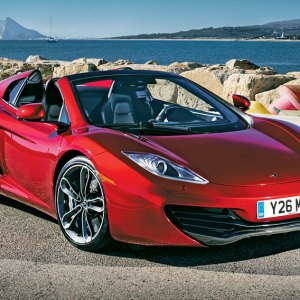 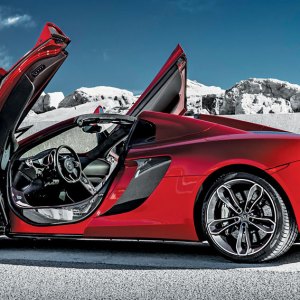 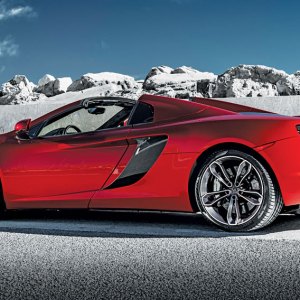 The definition of a supercar has changed from one era to another in accordance with what has seemed super at different times. The term seems to have been coined in 1920 in an advertisement for the Ensign Six and its 6.7-liter straight-6 engine. Muscle cars of the 1960s and ’70s, including the Pontiac GTO and SC/Rambler, were dubbed supercars because they broke the barriers of 300 hp and 100 mph.

Today, a car can earn the super prefix if it produces at least 600 hp, exceeds 200 mph without rattling or shuddering, is built almost entirely from lightweight materials, and delivers responses as quick as human instincts. There you have the 2013 McLaren Automotive 12C Spider, a supercar and a superb convertible that has the same poise, élan, and mechanicals as the 12C coupe that preceded it.

The 12C Spider, priced at $266,000 and being delivered now to U.S. buyers, is about as fast and as furious as any car—convertible or coupe—from Ferrari, Lamborghini, Mercedes-Benz, Audi, or Lexus. Its engineering benefits from the motorsports experience of McLaren Automotive’s sister company McLaren Racing, which has been building racecars for five decades. The McLaren team, now known as Vodafone McLaren Mercedes, has won 182 races from Indianapolis to Le Mans, and it has claimed a combined 20 drivers’ and constructors’ championship trophies. McLaren’s racing résumé and seniority in the sport are second only to those of Ferrari.

The 12C Spider is powered by a midmounted, biturbo, 616 hp V-8. It has a zero-to-60-mph skedaddle time of three seconds (when equipped with Pirelli P Zero Corsa tires) and a top speed of 204 mph. For drivers concerned with their carbon footprints, the car achieves an estimated average of 24 mpg.

The 12C Spider’s 165-pound monocoque chassis is molded from carbon fiber. (McLaren Racing introduced carbon fiber to motorsports in 1981, and in 1992, McLaren Automotive became the first company to use the composite to build a road car, the F1.) The monocoque—or MonoCell, as McLaren calls it—first appeared on the 12C coupe, which launched in 2011. McLaren engineers say the 12C Spider retains enough of the coupe’s rigidity to eliminate the need to lumber the car with supporting struts and braces, which is standard procedure when coupes are cut into convertibles.

Visually and mechanically, the Spider is virtually identical to the 12C coupe. Designed by Frank Stephenson—whose work also includes BMW’s X5 and Mini, Ferrari’s F430, and Maserati’s MC12—the 12C Spider has the same driveway-scraping lines as the coupe. It also has the same 7-speed, dual-clutch gearbox.

The 12C Spider has no weighty antisway bars, just a chassis-control system mated to a familiar double-wishbone-and-coil-springs setup. The system has three modes—Normal, Sport, and Track—and uses hydraulically interconnected dampers that respond according to the mode and the road conditions.

The car’s two-panel roof can be raised or lowered in 17 seconds, with the car traveling as fast as 19 mph. The tonneau, which flows into twin buttresses that conceal fixed roll bars, lifts up so that the roof can fold under it.

The 12C Spider’s launch control optimizes takeoff speeds enough to bang an unsuspecting passenger’s head against the roll bar. Apply the brakes when the car is traveling at 59 mph or faster, and a rear wing pops up to increase downforce and enhance stopping power and stability through corners. A torque-vectoring system brakes the inside rear wheel to improve turn-in and cornering speeds and allow the driver to channel Lewis Hamilton. Each of these systems was employed in Formula 1 racing, and each has since been banned from the sport for having encouraged even greater speeds in an already insanely fast enterprise.

McLaren predicts sales of 1,000 to 1,500 12Cs (coupes and convertibles) in 2013. As a boutique builder of supercars familiar only to initiates, the company is close to where Ferrari was in the 1940s (even if the early Ferraris were not advertised or hailed as supercars). But instead of pointing to that parallel, McLaren managing director Antony Sheriff, speaking at the 12C Spider’s media test-drive event last fall in southern Spain, repeated what Lee Iacocca said in 1978 when Chrysler brought him aboard to save the company from bankruptcy: “We don’t want to be the biggest. We just want to be the best.”

Exclusive as they may be, the Spider and the coupe will become McLaren’s entry-level models later this year, when the company releases its $1.1 million P1, which, according to reports, will be powered by a 960 hp engine and have a top speed of 250 mph.

The P1’s arrival will not mark the first time McLaren has offered a road car of such cost and capabilities. The company’s initial entry in the supercar stakes was the 240 mph F1, which it produced in 1993 around a BMW V-12 engine. McLaren built only 106 examples (including racecars), each with a starting price of $1 million (or about $1.6 million today). Ten years later came the Mercedes-Benz SLR McLaren, another conjunction build. During the SLR’s seven-year production run, from 2003 through 2009, nearly 2,200 were sold—a respectable total for a car costing more than $500,000, but still short of Mercedes-Benz’s sales goal of 3,500 for that time span.

Both programs demonstrated that McLaren could build supercars, said Sheriff, who has been with the company since just prior to the launch of the SLR, “but we introduced the F1 and stopped, then built the SLR and stopped. It was not a valid business plan, although it taught us to build cars that were not cobbled together, to build a complete car.”

The 12C Spider and coupe, he explained, are 100 percent McLaren. “It is our engine. All the components are McLaren, and that’s just the right thing to do.”

The 12C Spider’s performance, technology, price, and appearance invite comparisons to those of the Ferrari 458 Spider. Both cars have sufficient presence and exclusivity for portico parking at the Beverly Hills Hotel, and both, as the Brits are wont to say, go like the clappers. Sheriff did not bristle at another Ferrari comparison, but he appeared wearied by it. “We are not trying to make a Ferrari,” he said. “We are trying to make a McLaren, a car that can be heroic on the track, exceedingly fast. But it has to be comfortable enough to be driven through Ronda.”

Ronda is a town built on Neolithic remnants in the Andalusia region of southern Spain. The Romans occupied it and named it during Julius Caesar’s reign; Orson Welles’s ashes are buried there; and Ernest Hemingway’s fiction described fascists in the Spanish Civil War being tossed from the cliffs into the Guadalevín River. Less than an hour’s drive from Ronda (maybe only 20 minutes in a 12C Spider) is another former Roman hangout, the town of Cesares—which is now the home of the Finca Cortesin, a five-star golf resort that McLaren chose as the base for the 12C Spider’s media test-drive event.

McLaren selected Cesares in part because of the nearby mountain roads, which were sometimes clogged by off-peak summer tourists but were usually open enough for scary-fast passing and hard braking into hairpins. The town also is close to the Ascari Race Resort, a private circuit that serves as a playground for European car clubs, gentlemen racers, and builders of sporty cars. Those with triskaidekaphobia need not apply for Ascari membership; the 3.4-mile track wriggles around undulating pastures, challenging drivers with 13 left turns and 13 right turns. Each corner is plagiarized from another track—Silverstone, Brands Hatch, Le Mans, the Nürburgring, and other notorious circuits. One driver has described Ascari as the “most challenging track in the world”—and that driver, two-time Formula 1 world champion Fernando Alonso, knows tracks.

Journalists were given three laps of unsupervised playtime with the 12C Spider. Because Ascari is impossible to memorize so quickly, our allotment of time allowed for only lukewarm lapping, though with furious sprints on the straights between the corners to give us a sense of the 12C Spider’s capabilities under real pressure.

On the mountain roads, shifting—by paddles or in automatic mode—was F1 instantaneous and snap-free. The steering was precise, and the brakes—cast-iron discs with forged-aluminum hubs—were inexhaustible, teasing a driver into faster, harder, tighter cornering.

The 12C Spider made a lasting impression with its completeness. Everything functioned in tight unison; the vehicle motored as one handmade piece, not as a formation of robot-built parts. The car was indeed super.