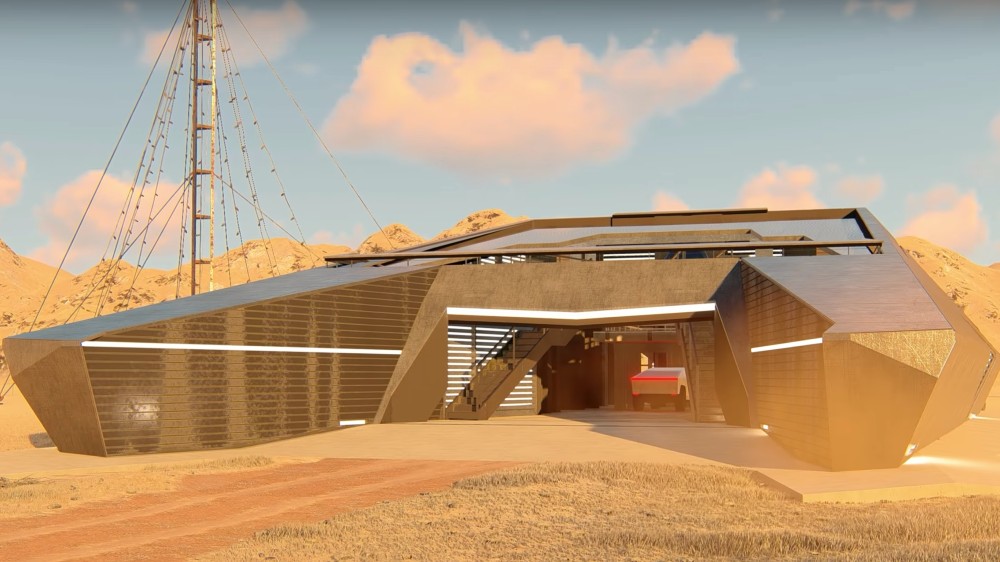 Why stop at a dedicated garage for your Cybertruck when you can purchase an entire home to store the controversial EV in? A team of architects from Russia may have dreamt up the perfect home for the most diehard of Tesla enthusiasts—a hulking residential structure inspired by Elon Musk’s latest game-changing vehicle.

St. Petersburg-based Modern House’s latest design is the Cyberhouse, a concrete-and-steel bunker that takes its style cues from the futuristic Cybertruck. Not only is the home a perfect aesthetic match for the electric pickup, but the firm also claims it will be tough enough to withstand a nuclear war or a zombie apocalypse.

“It is a self-sufficient multi-level bunker designed for living in a range of extreme conditions, from a Z Day to nuclear fallout,” the firm wrote in a press release.

Resembling a spaceship hangar out of a movie, the Cyberhouse’s two levels feature 3,230-square-feet of living space and can comfortably house up to seven adults, according to Modern House. While it’s unclear exactly what the interior looks like, it will feature an atrium with a subterranean parking space for the Cybertruck accessible by elevator. Meanwhile, the structure’s angular exterior is made of concrete encased in heavy-duty steel, has doors that act as airlocks and is equipped with armored windows to protect from any potential threats.

Right now, there are currently no plans to build the Cyberhouse, but that could always change. Autoblog reports that Modern House has received several inquiries about the design since it was unveiled last week.

If the Cyberhouse were to be built, it wouldn’t be the first Cyberruck-inspired structure to go from concept to reality. Within days of debuting its Cybunker concept earlier this month, New York-based design firm Lars Büro announced plans to put its futuristic garage into production. While the Cybertruck won’t be available until 2021 at the earliest, specs, pricing and availability details for the dedicated garage are expected to be announced early next year.