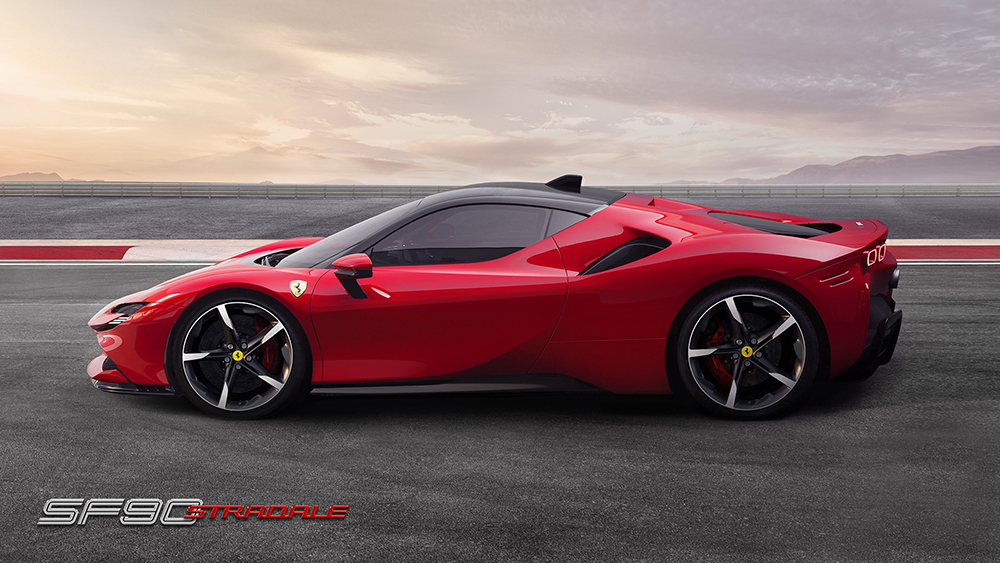 Electrification is ubiquitous, but back when Ferrari launched LaFerrari, hybridization was a less-accepted notion, especially for a brand synonymous with powerhouse V-12s. Yet Prancing Horse clients and fans alike welcomed the concept, so as Ferrari planned to unleash its next salvo from Maranello, the inclusion of electrification was most decidedly on the table. Now, Ferrari brings us the SF90 Stradale, its most powerful road-going car ever. And it’s a plug-in hybrid.

The SF90 packs a eye-watering 986 horsepower, which is made in concert by a turbocharged 4.0-liter V-8—producing 769 horsepower and 590 lb-ft of torque—and three lithium-ion powered electric motors, good for another 217 horsepower. While the combustion engine alone is the most powerful V-8 Ferrari has ever fabricated, the addition of the two electric motors—one on the rear axle and two in the front—the sum of the motors is uncompromising.

To get all that oomph translated to the road in tidy fashion, there’s an eight-speed dual-clutch transmission that’s working with an all-wheel drive system, the first time Ferrari has deployed AWD on a sports car. (The AWD GTC4Lusso is technically a grand tourer.) The powertrain and drive set up afford some stellar speed figures. The sprint to 60 will happen in 2.5 seconds, and 125 mph will arrived in a staggering 6.7 seconds. Keep the accelerator buried and you’ll top out at 211 mph.

While it’s got more power than a LaFerrari, the SF90 is also about 30 pounds lighter than its cousin, clocking in at 3,461 pounds. That means it’ll turn in track times that are on-par with the LaFerrari. At Ferrari’s Fiorano test circuit, the SF90 notched about a 1:19 time, which is neck-and-neck with the LaFerrari’s 1:19:70.

You can run the SF90 solely off the electrical motors, with a range of about 16 miles, capped at 84 mph, and when you deplete that energy, simply plug it in to recharge. Four drive modes are found on wheel inside the redesigned cockpit: eDrive, Hybrid, Performance, and Qualify. The first is for silent, combustion-less cruises, and the second will alternate power draws between the electric motors and the V-8. Performance will use the V-8 to help charge up the electric motor trio, while Qualify—such a great name for a driving mode on a road car—will give you maximum power from everything at once.

While price and production numbers for the SF90 Stradale will be announced in the future, expect the price tag for something packed with serious technology to be sufficiently steep.