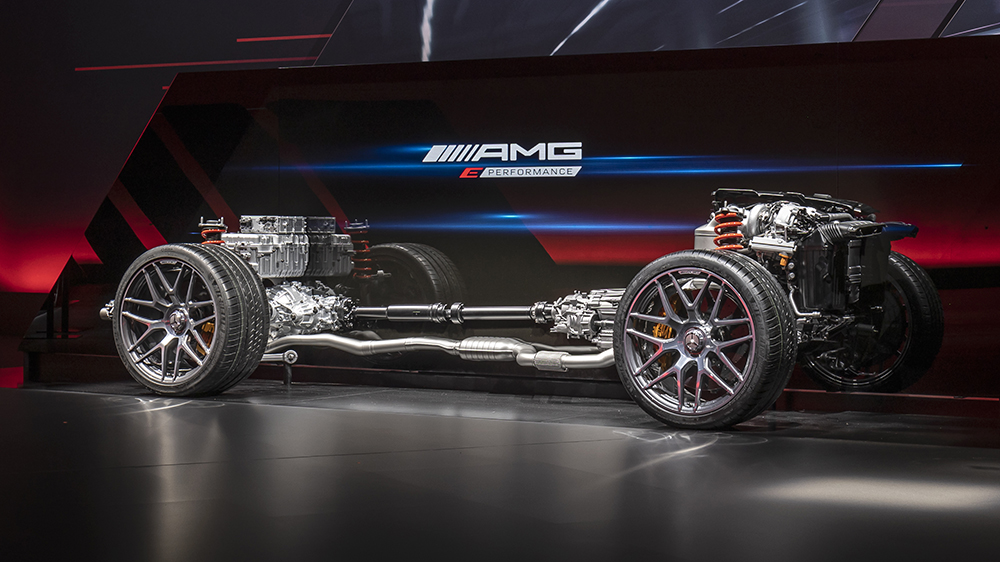 Mercedes-AMG is known for producing powerful speed machines. And the marque doesn’t intend to let the electric revolution change that.

No, the Mercedes-Benz subsidiary isn’t resisting the inevitable; in fact, quite the opposite. On Wednesday, the marque outlined its future electrification strategy. At the center of the plan is the AMG E Performance hybrid powertrain designed to ensure that lightning-fast performance cars remain the brand’s trademark for years to come.

Developed in collaboration with Mercedes-Benz’s Formula 1 powertrain company, High Performance Powertrains, the modular setup mates a front-mounted, turbocharged internal combustion engine with a 6.1-kWh battery pack and electric motor in the rear, according to a press release. The electric motor, which is capable of producing up to 201 horsepower and 236 ft lbs of torque, drives the rear axle directly, but can also direct power towards the front set of wheels when needed.

The bulk of the power, though, will still come from the gasoline engine in front, either an inline-four or a V-8, that’s mated to AMG’s Speedshift automatic transmission and equipped with an electric turbo charger. The mill is powerful on its own, but the rear electric drive unit will provide a boost when needed, keeping performance consistent so that you’re not dealing with any turbo lag. The hybrid setup also opens up six different modes to drivers—Electric, Comfort, Sport, Sport Plus, Race and Individual. There’s at least one mode for every driver, whether you value efficiency, smoothness, versatility or performance.

AMG hasn’t provided final performance figures for its new powertrains, but it’s likely they’ll be much more powerful than the marque’s previous mild-hybrid efforts. The V-8 setup looks capable of generating 804 hp and 738 ft lbs of torque, according to Road & Track. The inline-four, meanwhile, could churn out up to 442 horses. We should find out soon enough, as the former is expected to appear in a new GT four-door, while the latter could make its debut in the next-generation C63.

Of course, like most automakers these days, AMG will also release an entirely battery-powered model or two. In fact, this year will see the debut of at least one all-electric model based on an entry in Mercedes’s new EQ lineup of EVs, according to the brand. While nothing has been announced yet, it would be fascinating to see what AMG could do with the EQS and its 460 hp powertrain.