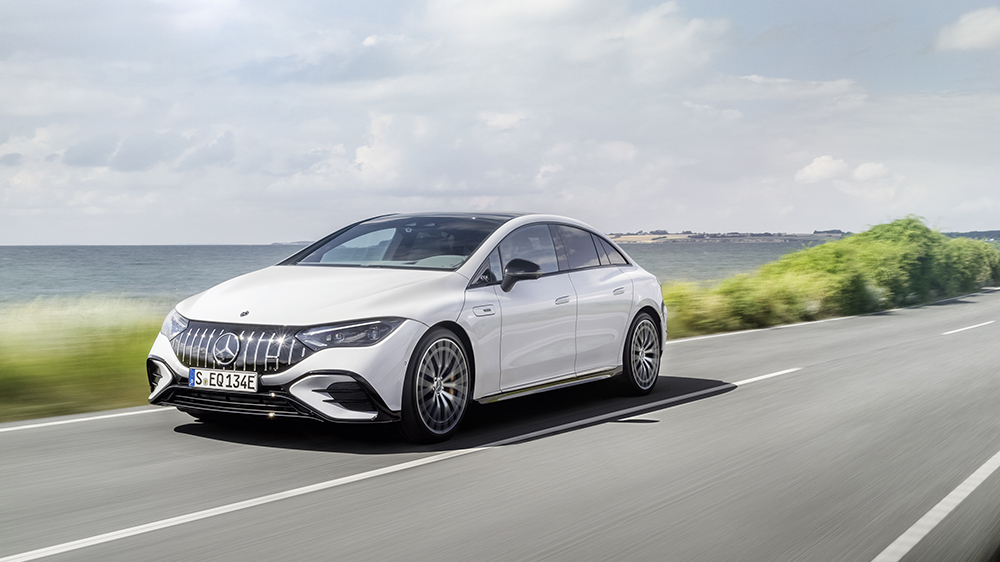 Mercedes-Benz is ready to add some spice to its all-electric EQ line.

The luxury marque has just unveiled its latest EV, the high-performance Mercedes-AMG EQE. The mid-size sedan is smaller than last year’s EQS but offers even more power than that zero-emission stunner.

Just as you’d expect from a car that bears the AMG badge, the EQE is an EV designed to go fast. The mid-size sedan is equipped with a dual-motor powertrain that can send power to all four wheels, making 617 hp and 701 ft lbs of torque, which compares quite favorably to the 516 hp and 611 ft lbs of torque produced by the top-of-the-line EQS 580 4MATIC. If that’s somehow not enough for you, there’s an optional Dynamic Plus package that boosts those figures to 677 horses and 701 ft lbs of twist. Thanks to all that grunt, the “standard” AMG EQE can zoom from zero to 60 mph in 3.4 seconds and has a top speed of 137 mph, while the performance version can do the same in 3.2 seconds and tops out at 149 mph. The EQS 4MATIC, for comparison’s sake, has a zero-to-60 time of 4.1 seconds and a top speed of 130 mph.

The AMG EQE’s drive unit is powered by a 90.6-kWh lithium ion battery pack. Mercedes is aiming for a range between 275 and 322 miles, which would be solid if unspectacular. We’ll have to wait until closer to release to find out the EPA-certified number. If the 47-mile difference between the two figures strikes you as odd, it might be because Mercedes doesn’t want to miss the target again. Connected to a DC fast charger you’ll be able to add around 112 miles in 15 minutes, which is again solid if unspectacular.

In the looks department, the AMG EQE is basically just a smaller version of the EQS, similar to how the gas-powered E-Class is really just a shrunk-down S-Class. There are some subtle differences that combine to give the vehicle its own unique character, though. These include AMG Panamerica-style “grille” with vertical slats, as well as new light programing, diffusers, spoilers and wheels. Like the EQS, the AMG EQE looks sleek and modern, if a bit less imposing.

Inside the AMG EQE  Mercedes-AMG

The interior is also relatively unchanged. Thankfully, this means that the dashboard spanning MBUX hyperscreen is present. From the MBUX you’ll be able to select one of five driving modes: Slippery (which offers 50 percent power), Comfort (80 percent), Sport (90 percent), Sport+ (100 percent) and Race Start (100 percent). The Dynamic Plus package features an additional mode, Race Start with boost, which allows you to fully utilize the drive unit’s extra hp, and few additional driving sounds that can also accessed via the MBUX.

You’ll have to wait for your turn to get the front seat of the AMG EQE, but not too long, fortunately. The sporty EV won’t go on sale until the early next year. When it does though, Mercedes-Benz will have an battery-powered vehicle that can truly compete with the best of them.

Check out more photos of the EQE below: