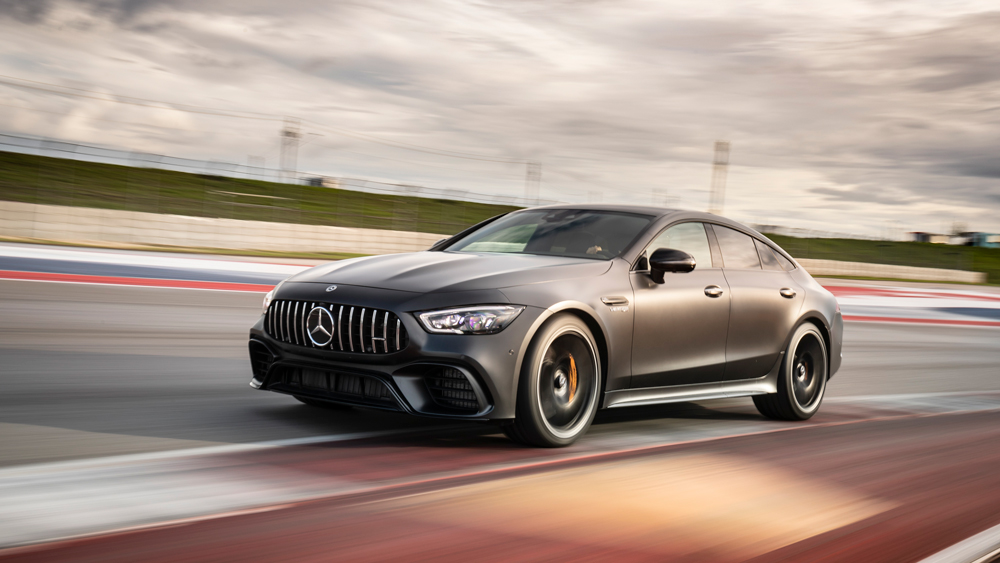 Just outside of Austin, Tex., the observation tower at the Circuit of the Americas looms above the 3.4-mile racecourse like a colossal, red-and-white sauropod. For racing fans, a glimpse of this 25-foot behemoth evokes thoughts of Formula 1, but we’re here at the track on this stormy day to drive the all-new Mercedes-AMG GT 4-Door Coupe, a roomier addition to the AMG family of Grand Turismos and a head-on competitor to the Porsche Panamera.

AMG, the one-time independent tuning shop based in Affalterbach, Germany, and later acquired by Mercedes-Benz, continues to aggressively develop and market new models with its own dedicated team of designers and engineers. The brand’s first all-in-house sports cars were the SLS coupe and roadster, launched in 2010. Five years later, it introduced the AMG GT, a pure, sexy sports coupe that would be the first in an ever-growing lineup of road cars and customer racecars. Now, AMG applies its successful formula to a four-door, offering enhanced practicality without sacrificing performance.

At first glance, the AMG GT four-door might look like the newly redesigned CLS-Class, as both are swoopy, coupe-y four doors with a sleek silhouette. The AMG, however, is the edgier, rebellious sibling that is far cooler and just a little more dangerous, with its muscular haunches and AMG-specific design cues.

The four-door coupe cruises from zero to 60 mph in 3.1 seconds.  Photo: Courtesy of Mercedes-Benz.

“The challenge was to keep the identical form language [of the AMG GT coupe]” says AMG designer Jean-François Huet. “It’s a big car, but the shape is very reduced and it doesn’t look heavy; it’s lean like Usain Bolt.” In a walkaround, Huet calls out the “really mean” shark nose and front grille beset by vertical blades, power bulges on the hood, and short overhangs. The top-grade 63 S can be spotted by its “A-wing” front bumper inspired by a jet fighter, larger front air intakes, and trapezoidal dual tailpipes. There are six exterior packages from which to choose, including an aero package that adds a large, fixed rear wing made from carbon fiber.

“We call the cars our superheroes,” Huet says. One of his favorite color combinations is Black Magno matte paint with black gloss trim and black wheels included with the Night Package. “It’s the Batman car,” he whispers with a grin.

With so much of its technology taken from Formula 1, the Deutsche Tourenwagen Masters series, and Mercedes-AMG’s other racing programs, the AMG 4-door is not just for merely parading down the street. At the heart of the 63 S is AMG’s 4.0-liter biturbo V-8, tuned for 630 hp and 664 ft lbs of torque. The 63, meanwhile, uses a 585 hp version of the same engine. A new inline six-cylinder engine, paired with a 48-volt electric starter-generator is used on the AMG GT 53, which is good for 435 hp and an electric boost of up to 22 hp.

At the Circuit of Americas, that translates to a delightful power rush in our 63 S when we hammer it down the front straight and up the steep hill into the first turn. The car’s manufacturer-estimated zero-to-60 mph time of 3.1 seconds beats that of all the Porsche Panamera models, even the plug-in Turbo S E-Hybrid that borrows its tech from the 918 Spyder. AMG owners will recognize the range of drive modes, which include Sport, Sport Plus, and Race, which offer increasingly more aggressive throttle response, shift points, and other parameters. Eight-cylinder models get an AMG nine-speed MCT transmission that uses a wet clutch, controlled by software for quick, imperceptible shifts. Steering feel is satisfyingly weighted and dialed in, making the driver feel in control and connected to the road. Making any time in an AMG GT even better is that glorious exhaust note, which is robust and throaty without sounding like it’s trying too hard. In Sport Plus and Race modes, there’s that delightful little crackle when we lift.

Through the “esses,” the 63 S remains unshaken, helped by a rigid chassis with additional reinforcements and an adaptive air suspension. As with the AMG GT coupe and convertibles, all four-door models are equipped with rear-wheel steering and 4MATIC all-wheel-drive with electronic variable torque management. The latter constantly redistributes torque to each individual wheel as needed. AMG also has two settings for its stability control system. In “Sport Handling” mode, the thresholds are lowered for the electronic aids, but aren’t completely off. All of these systems work in synch to keep the AMG planted and stable, while allowing enough slip to put your car-control talents to work.

Many of the controls are located on the center console.  Photo: Courtesy of Mercedes-Benz.

At this track, Formula 1 cars can reach nearly 207 mph (the lap record, incidentally, was set last year during qualifying by Mercedes-AMG Petronas driver and current reigning world champion Lewis Hamilton). On even semi-conservatively driven hot laps, we hit about 135 mph down the back straight in our AMG 63 S, still far from its published top speed of 195 mph.

Although the 63 S is clearly tuned for performance, its drive modes are varied enough to make it a fine tourer. Once our adrenaline was sufficiently pumping, we took the 63 S off track and onto the roads north of Austin. In comfort mode, the car is still firmly sprung but more forgiving. Our only wish was for a massaging seat function, which didn’t come with our racing seats, although they were more than apt at pinning us in.

We have sung the praises of Mercedes and AMG interiors for some time now, and the AMG GT 4-door doesn’t disappoint. Our 63 S uses black Nappa leather with black microfiber trim and yellow topstitching; we also like the grey and black two-tone combo on a nearby AMG 53. Unlike the comparatively spartan cabin of the GT coupes and convertibles, the four-door uses Mercedes’ new dual widescreen setup, one of the best instrument panels currently on the market. Air vents that look like jet turbines illuminate with ambient color. As with the two-seaters, many of the controls are located on either side of the gear shifter in the center console, but they aren’t as beautifully done as the ones on the smaller car (we like the round knobs with the chrome trim as opposed to the flat black plastic buttons). The flat-ish storage area ahead of the shifter houses two cup holders, and, when closed, nicely balances the smoked brisket breakfast tacos we bought at a roadside stand, lured in by the wafting smell of barbecue.

In the back seat, most adult passengers can fit comfortably, and a six-foot-tall compatriot had enough legroom to sit behind the driver’s seat, which was also positioned for his size. Huet says the design team purposely started the taper of the roof farther back to maximize rear headroom.

In all, the AMG GT stands out as a beautiful, capable alternative in the small but loyal four-door-coupe niche. Those who are used to the precise but somewhat antiseptic manners of the Panamera may find the driving dynamics of the AMG a little idiosyncratic, but there’s no question the AMG wins the personality and beauty contest.

9: Current number of AMG GT variants on the market, including coupes, convertibles, and four-doors.

1: Number of people who hand-assemble a single AMG V8 engine from start to finish

11: Turns at the Circuit of the Americas racetrack where we tested the AMG 63 S 4-Door

179:  Overall length of the original AMG GT coupe, in inches

6: Number of pistons on the AMG 4-door’s front calipers

12.3: Size, in inches, of the AMG 4-Door’s twin-widescreen displays

Mercedes-Benz built straight-six engines for a nearly 100 years. Its first, developed early in the 20th century, was a 75 hp power plant with a whopping 10-liter displacement. In the 1990s, the company halted its production of inline-six engines in favor of a V-6 configuration. Now, the brand returns to its roots, but with a modern, electrified twist. Found on the AMG GT 53 4-Door, the AMG E 53 Coupe and Convertible, and the new CLS-class, the M256 (as it’s known internally) is a 3.0-liter turbocharged gasoline engine paired with a 48-volt electric starter generator for extra power and efficiency.

On the AMG GT 53 4-Door, the new inline-six is tuned to make 429 hp and 384 ft lbs of torque, the latter available at as low as 1,800 rpm. On our test drive in Austin, we drove the GT 4-Door and the E 53 coupe on freeways and city streets and were treated to instant, seamless response from the new power-train setup. Dubbed “EQ Boost,” the system can dole out more torque and up to an additional 21 hp in an instant.