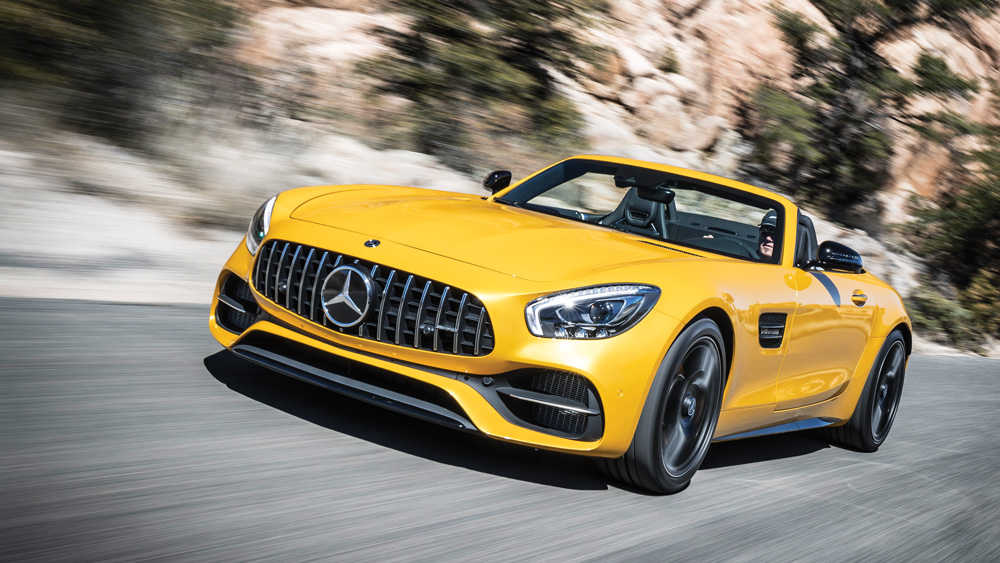 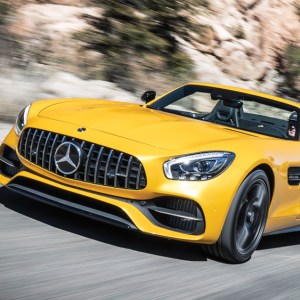 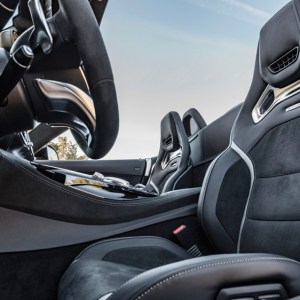 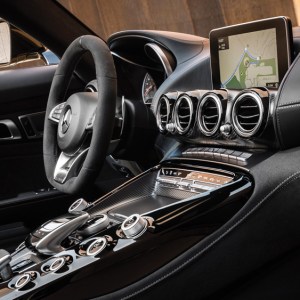 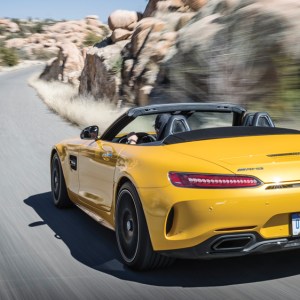 It was an unusually cool morning in Arizona when my driving companion and I climbed into the Mercedes-AMG GT C Roadster. The previous day’s rain had subdued the dust, and the sun had yet to break through the clouds. It was perfect convertible weather. The car started with a growl like those of the Mercedes-AMG coupes that preceded it: the base-model GT, the GT S, and the GT R. With the active exhaust switched on, the GT C Roadster crackled and purred its way past Scottsdale’s strip malls and onto a two-lane highway that was still damp from the previous night’s rain. The crisp 7-speed dual-clutch transmission helps the car dash from zero to 60 mph in 3.7 seconds. Top speed is 196 mph. When the coast was clear, I put the pedal down and turned the view of the nearby field of wildflowers into a yellow blur.

Instead of just lopping off the top of the GT coupe, the engineers at AMG created a completely new car that shares only the hood, doors, and rear wing with its fixed-roof sibling. “What makes the car a roadster, in my opinion, is the proportion,” says AMG designer Vitalis Enns. “Any car can be a convertible. A roadster has a high beltline and a very low back end.”

“Thank you for 100 years of competition. The previous 30 years were a bit boring.”—Social-media post last year from Mercedes-Benz (founded in 1886) to BMW (founded in 1916)

The GT C Roadster’s Panamericana front grille is wider than that of the GT Roadster. Its forward tilt and prominent vertical bars reference the grille of the legendary 300 SL of the 1950s. (The 300 SL’s grille was based on that of the Silver Arrow, the prewar racecar from Mercedes-Benz.) Behind the grille are electronically operated shutters that open when the engine needs additional cooling but otherwise remain closed to enhance aerodynamics. The GT C Roadster’s fender flares are larger than those of the base Roadster, but there are no frivolous scoops, bulges, or cutouts. “Everything on the design has a technical purpose,” Enns says. “There are no useless elements.”

In the cabin, napa-leather sport seats sit low to the ground, making you feel more connected to the road. The flat-bottomed steering wheel feels meaty but not too thick. The dash has no giant wide-screen displays like those in the Mercedes-Benz E-Class and forthcoming S-Class sedans; there’s nothing to distract you from the driving.

“You ordered cake, we made donuts. M congratulates AMG on its 50th anniversary.”—Billboard at the Nürburgring this year. Next to the words was the image of a BMW M4 doing donuts and burning rubber.

With the top down and the car traveling at faster-than-highway speeds, the cabin remained relatively quiet, allowing my passenger and me to carry on a conversation without yelling. And although we would have been happy listening to just the exhaust note, we were able to enjoy the music playing on the premium Burmester audio system. The system transmits sound through a special aperture in the right wheel arch, effectively transforming the entire interior into a bass box and eliminating the need for a space-hoarding subwoofer. The fixed wind deflector and other ingenious aerodynamic engineering features kept me from needing a head scarf to hold my hair in place.

We headed northeast, through Wickenburg, a former mining town now dotted with painted bronze sculptures and souvenir shops. We continued into more mountainous territory, where shrubs replaced the cacti that lined the road earlier in the trip. I set the car in its most aggressive driving mode, which tightens the adaptive sport suspension, quickens the throttle response, and shortens shift points. With help from the electronic limited-​slip differential and rear-axle steering, the GT C Roadster conquered sweeping turns and off-camber corners with poise and precision. At slower speeds, the rear wheels and front wheels turn in opposite directions. Once the car reaches 62 mph, all four wheels turn in the same direction to provide superb stability and pinpoint accuracy. The standard performance brakes have plenty of bite, but carbon-​ceramic brake rotors are an available option.

By the time the red rocks of Sedona came into view, the sky had brightened, and the temperature was becoming unbearably hot, prompting me to raise the fabric soft top.

With the top up as we sped down the highway on the way back to Scottsdale, very little wind noise penetrated the cabin. But thankfully, we could hear the engine’s roar—a thrilling sensation that is not just by chance a part of the car’s appeal. “It’s not about pure technology,” says Enns. “We are also concerned about the emotional.”