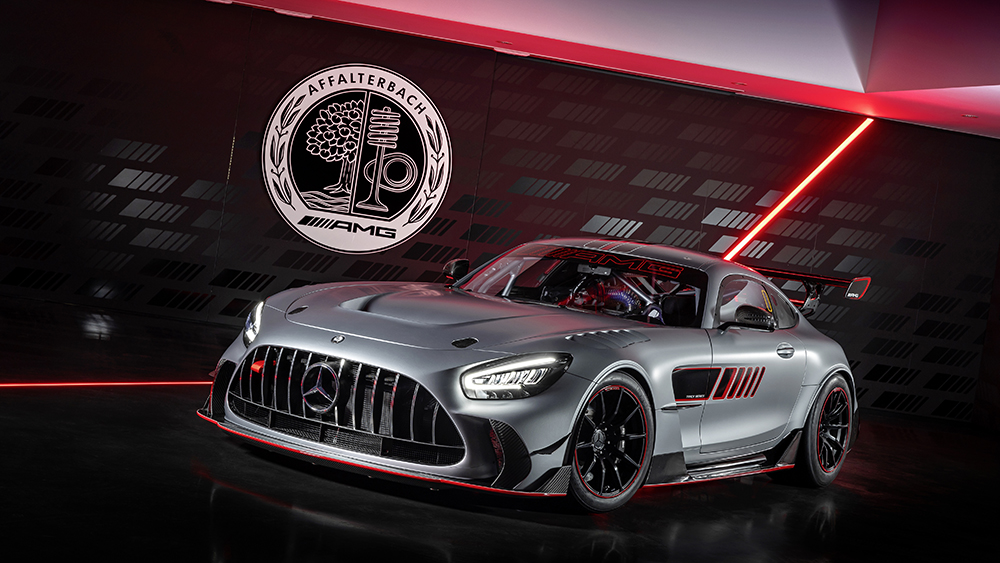 Whether hitting the track at circuits nearby or beyond, Mercedes-AMG’s next limited-edition release may help you score a few trophies of your own.

Dubbed the GT Track Series, the new supercar is the marque’s most powerful sports car ever produced for customers. And, coming in at only 55 units, it’s designed to bring just a handful of lucky drivers a speed machine that will turn heads at the track.

True to that goal, the new GT’s aerodynamic exterior is made with racing in mind. The car’s bonnet, wings, sills, back door and rear apron are all made of carbon fiber, directly contributing to its light 1,400 kg curb weight. It also features a sporty radiator grille for maximum airflow, standard 18-inch wheels and an exclusively made front splitter that improves the downforce on the rear axle. And it all comes wrapped up in a two-tone anthracite and black exterior that pops with striking red accents.

A rear-view shot of the GT Track Series racer.  Mercedes-Benz

For maximum track safety, the model’s bodywork is primarily composed on high-tensile steel that’s bolted to an aluminum space frame, and there’s an extraction hatch located on the roof. Inside, meanwhile, you’ll find a five-point safety harness, customizable ergonomic foam seating and adjustable pedals in its interior. The racer even features an exclusive steering wheel made in collaboration with simulation racing experts at Cube Controls, alongside a Hewland HLS 6-speed racing gearbox that transfer power to the rear axle. Like much of the body, the dashboard is made of carbon fiber and includes a Bosch DDU 11 Driver Display Unit, a device that keeps track of racing data, such as lap times.

A look at the model’s exclusively-made steering wheel.  Mercedes-Benz

Though it is not street legal, the two-door coupe will be delivered in the second quarter of 2022, as part of AMG’s GT legacy. The marque’s GT Black Series model, which introduced in 2020, is among the marque’s most popular models, and it served as the basis for the GT Track Series. The racer offers the same 4.0-liter V-8 biturbo engine as its sibling but with new enhancements. Custom motorsport injectors and a flat crankshaft help the car’s mill deliver 734 hp and 626 ft lbs of torque. The Track Series’ top speed remains unknown at the time of writing, but we would expect it to surpass the the Black Series’ blistering 202-mph mark.

The speed machine should be equally adept at slowing down when needed, thanks to its steel brakes. The setup includes a brake beam for adjusting the balance, as well as carbon brake air ducts and stable brake air lines for optimal cooling.

A close-up on the two-door coupe’s grill and red-lined chassis.  Mercedes-Benz

As you would expect from a Mercedes-AMG, each GT Track Series will be hand-built in Germany. And lest you forget its exclusivity, an embossed plaque inside each example will read “1 of 55.” (The example limit is meant to honor the marque’s 55 years.) The words “Track Series” are also embroidered on the driver’s seat and the limited-edition car cover.

The Mercedes-AMG GT Track Series models will sell for $405,000 each. Visit the marque’s website for more information and check out more images below.