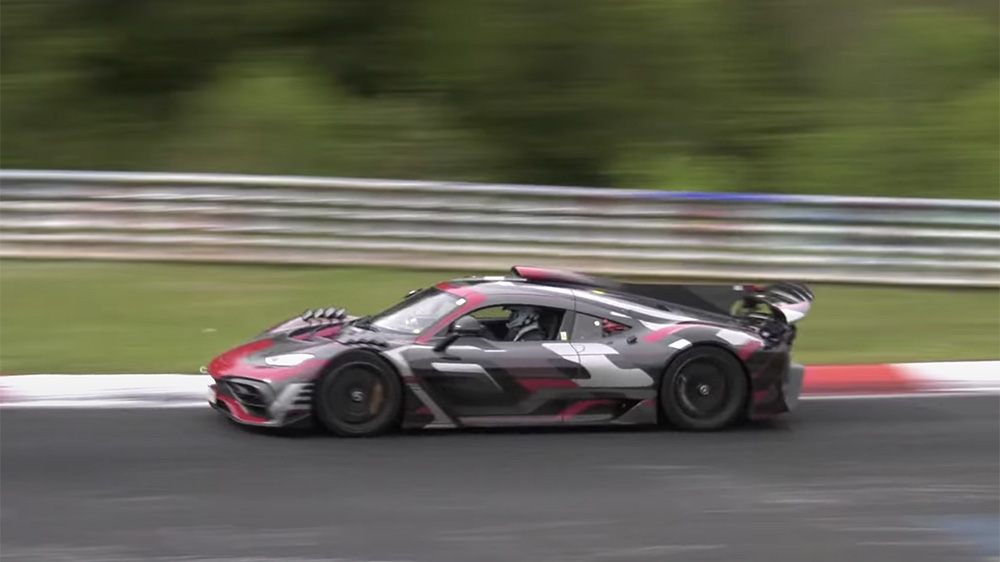 The Mercedes-AMG One is a complex bit of kit. Touting a Formula 1-derived plug-in hybrid drivetrain with 1.6-liter V-6 that spins to a dizzying 11,000 rpm, the heavily scooped, spoilered, and finned hypercar has experienced serious setbacks since it first dropped cover at the Frankfurt Motor Show in 2017. Daimler’s then-boss Dieter Zetsche and Mercedes-AMG Petronas F1 ace Lewis Hamilton touted the car as a race car disguised as a road car, and by all accounts the consumer product is actually more mechanically ambitious than its F1 counterpart. Hence development hell through the intervening years.

There’s no shortage of interest in the sold-out road car, which went into production this year after a beleagured development process. While spy shots of the imperious hypercar have surfaced over the years, new footage points to a potential stab at setting a record at the infamous Nürburgring Nordschleife racetrack.

Why is this important? In a word, history. When Porsche’s uncorked 919 Evo Four set the Nürburgring record in 2018 with a gobsmacking time of 5:19.55, AMG’s then-honcho Tobias Moers calmly said his baby could go ‘round the ‘Ring even faster. “It’s not a production car and ours is,” he told Motoring.com.au. “We have to meet full homologation rules. We could do some things to the aero and take out the air conditioner and fit some slightly different tires and then I’d be confident about it. But we’re not going to do that.”

Moers is the legendary speed whisperer who left AMG to lead Aston Martin, only to depart the Gaydon-based carmaker last May. With no telling what internal discussions are being had at Mercedes-AMG, one universal truth remains: Despite the temptation to take the high road and not engage in a war of numbers, there’s a certain cachet to claiming the top spot at an esteemed circuit.

First deliveries of the Mercedes-AMG One are anticipated to be right around the corner, so don’t be surprised if the 1,049 horsepower hypercar validates its rumored $2.7 million price tag with a record-breaking run at the ‘Ring.