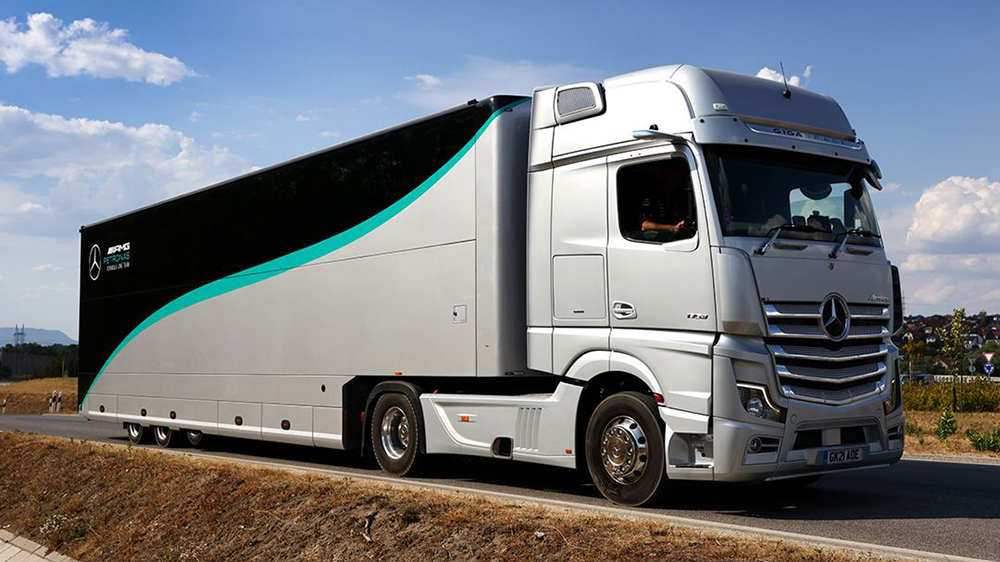 Mercedes-AMG Petronas is concerned with more than just the results it earns on the track.

The Formula 1 team that Sir Lewis Hamilton races for may not be having a banner season, but it’s found reasons to get excited away from racing. The operation has tested out biofuel in its freight vehicles and has seen a massive reduction in harmful carbon emissions as a result.

In 2022, F1 is bigger than ever before with 22 grand prix spread out across the globe. It takes a lot of effort and money to get the teams, their cars and their gear to each race. Most of this is handled via airplane or freight trucks, which run on jet and diesel fuel, neither of which are remotely eco-friendly. For the last part of the European portion of the competitive calendar, Mercedes-AMG Petronas decided to try something a little different, though.

In an attempt to reduce freight emissions, the team used hydrotreated vegetable oil (HVO 100) fuel in the 16 Mercedes Actros Gigaspace race trucks that moved it between the Belgian, Dutch and Italian Grand Prix. Only 870 miles separate the three races—which are located in Spa, Zandvoort and Monza—so what better time to try a biofuel derived from vegetable oils, waste oils and fats. The results were stunning. Using HVO 100 saved over 97,204 pounds of CO2, cutting freight emissions by 89 percent compared to what they would have been had the trucks been fueled by diesel.

“Sustainability is at the heart of our operations. Trialing the use of biofuels for our land freight is another example of our commitment to embed sustainability in every decision we make and action we take,” Team Principal and CEO Toto Wolff said in a statement. “We aim to be on the cutting edge of change and hope we can make the adoption of sustainable technology possible as we are all in the race towards a sustainable tomorrow.”

Freight vehicles aren’t the only area where Mercedes-AMG Petronas sees the potential for biofuels. In a recent interview with Robb Report, Wolff and Mercedes-Benz global CEO Ola Källenius said they expect, and hope to play a part in developing, a CO2-free fuel that will be used in Formula 1 cars in the very near future. They’re not the only team, either. The competition as a whole hope to start using sustainable fuel in its race cars by 2026. It’s not just being developed for race cars, either. Wolff said he thinks it’ll work in road vehicles as well.