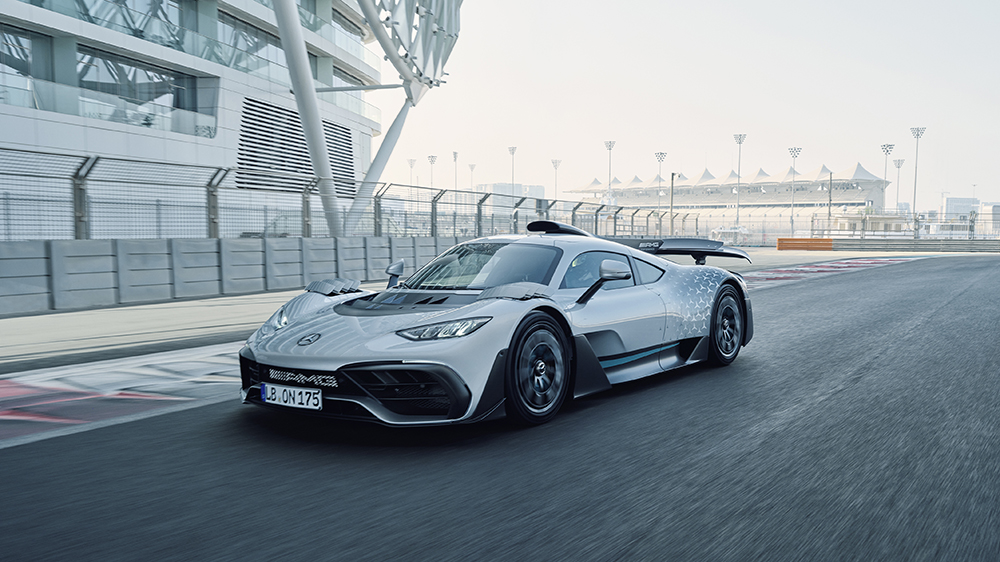 Good things come to those who wait.

Just look at the Mercedes-AMG One. A production version of the 1,063 hp hypercar finally made its big debut on Wednesday, five years after it was first announced. And based on our first look at the futuristic speed machine, the German marque’s sub-brand appears to have delivered exactly what it promised—a road car with Formula 1-quality performance.

Despite taking nearly a half decade to get here, the production model looks remarkably similar to the Project One concept unveiled at the 2017 International Motor Show Germany. And that’s not a bad thing: Low to the ground and with a wide track, the hypercar’s carbon-fiber body retains its progenitor’s curvaceous shape, including giant fenders in the front and rear. It has also held on to almost all of the original aerodynamic elements, including a roof scoop, shark fin and giant rear wing.

The One doesn’t look like a race car from the outside, but it does from the inside. The interior is stripped down, with almost none of the creature comforts you’d expect from AMG’s parent company. There’s room for just a driver and passenger, and everything has been done up in menacing matte black. There are two 10-inch displays, though. A digital instrument panel is positioned behind the Formula 1-style rectangular steering wheel, while an infotainment screen has been positioned in the center of the spartan dashboard. You can use the latter to navigate or check out what’s behind you via the its rear-view camera. The steering wheel and pedal box are also adjustable so the driver can find a position that feels just right.

Of course, what really separates the One from the rest of the AMG lineup is its Formula 1-derived, plug-in hybrid powertrain. At the heart of the boundary-pushing setup is the same mid-mounted, turbocharged 1.6-liter V-6 with a Motor Generator Unith (MGU-H) similar to the one you’ll find in Mercedes-AMG Petronas’s race cars. But the 574 hp engine—which is mated to a custom-made seven-speed automated manual transmission that sends power to the rear axle and has a 11,000 rpm redline—is only responsible for just over half of the hypercar’s power. The rest comes via the assistance four additional electric motors. One is directly mounted onto the engine, another onto the turbocharger, while the other two can be found on the front axle, one situated on each wheel. (The motors on the front axle also give the car all-wheel-drive capability.) As if that’s not enough, the system is connected to an 8.4 kWh battery pack that gives it 11 miles of electric range, should you need it.

Inside the One  Mercedes-AMG

The turbocharged V-6 and four motors combine to generate a monstrous 1,063 hp, according to the automaker. That’s the grunt more than any other AMG vehicle before it—and more than had previously been expected. You’ll be able to feel all that power when you’re on the road, too. Mercedes says the One can rocket from zero to 62 mph in 2.9 seconds (and to 124 mph in seven seconds) on its way to a top speed of just shy of 219 mph.

Other racing-inspired features include the One’s multi-link suspension setup, which has push-rod coilovers and adaptive dampers. It’s nine-spoke magnesium forged wheels also come wrapped in Michelin Pilot Sport Cup 2R tires and are equipped with carbon ceramic brakes. Finally, the vehicle has a Drag Reduction System just like an Formula 1 car, which allows you to lower downforce by 20 percent so you can hit optimal speed on straight always.

Mercedes-AMG hasn’t revealed a price for the One as of writing, but you can expect it to cross well into the seven-figure range. The exclusive model—AMG will make just 275 examples, all of which are already spoken for—is slated to go into production later this year. Only time will tell, but we suspect those lucky enough to have already secured theirs will feel it was more than worth the wait.

Check out more photos of the One below: