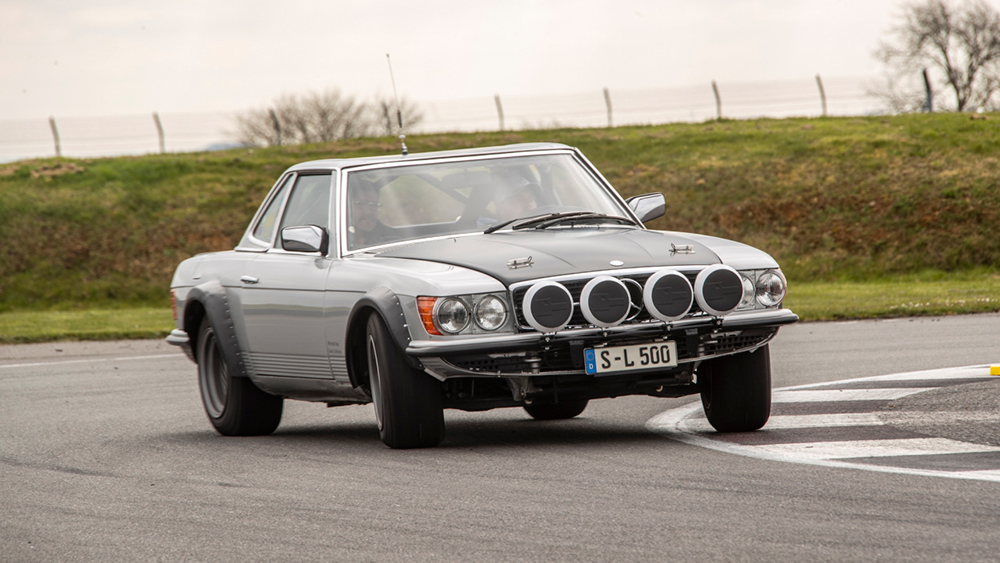 Valtteri Bottas flashes me a broad grin as I settle into the passenger seat of a 1980 Mercedes-Benz 500 SL Rallye. As the Finnish Formula 1 driver aims the prow of our coupe towards the start of a smaller handling circuit on the infield of England’s Silverstone racecourse, I share that this is my first ride-along with an active F1 driver. “Firsts for both of us,” he laughs. “I’ve never driven this car.”

Understandable, given that this is the only rally-ready SL Mercedes ever made. Back in the late 1970s, Mercedes-Benz had fashioned a few SLC coupes into off-road machines, but believed that the shorter and more nimble 500 SL would be better at rally dominance. Four such examples were built and Walter Röhrl was tapped as the top driver. But before the start of the 1981 season, Mercedes backed out of rallying, choosing to focus on other race formats. The coupe we’re sitting in is believed to be the last of the four units remaining.

Entering the track, Bottas guns the V-8. A shorter axle ratio was engineered to provide more torque off the line and it works. The force of acceleration belies the 300 hp engine as Bottas cranks into the first turn, a tight left-hand sweeper. The 500 SL nips into the apex and back out deftly, with nominal steering inputs from Bottas. “It handles really well, very balanced,” Bottas says, pushing the four-speed automatic towards the track-out point. We jostle through a few chicanes and tear up to the start of a long hairpin.

Here, Bottas starts the turn smoothly and efficiently, but at the apex, he stabs the throttle, forcing the car into oversteer. With a differential tweaked to generate an 80 percent locking ratio, the 500 SL is very happy to comply with large drifts, and under Bottas’ masterful inputs, this slide is a massive one. It’s a toss-up which is louder: the squealing tires or my guffaws.

A minute later, we’re back to the pits, where Mercedes-Benz is staging a celebration of 125 years in motorsports. The 500 SL Rallye—and Bottas—are one of a number of pedigreed cars and champion drivers lining up to tackle both the handling circuit and the larger F1 track, ferrying us journalists around at breakneck speeds. Rumbling around the smaller track are a 230 SL; a 1955 300 SL specified to the configuration of John Fitch’s Mille Miglia–winning steed; a crank-start, 40 hp, 1904 Mercedes-Simplex that won early hill climbs; and a 1928 SSK.

I squeeze into the latter beside former F1 driver and five-time German Touring Car Masters (DTM) champion Bernd Schneider. Under Schneider’s lead foot, this pre-war wonder absolutely flies. With a 7.1-liter, supercharged six-cylinder engine, the SSK only has a top speed of 120 mph, but with the open cabin and Schneider chucking it into every corner at what seems like the vehicle’s limit, even 50 mph is eye-watering. At full tilt, the supercharger’s tremendous whine sounds like a jet engine spooling up, further contributing to a greater sense of speed. While the SSK won a number of road rallies, including the Mille Miglia, it’s mind-boggling to imagine spending 1,000 miles in the teensy cockpit. The passenger—or navigator—seat is so small, I have to wrap my arm around Schneider’s back just to fit without impeding his ability to turn the giant tiller.

Mercedes broke out the big toys for the F1 circuit, including a 190 E 2.5-16 Evolution II DTM car and a 2018 GT4. I’ve unsuccessfully lusted after experiencing a 190 Evo II, in street homologation guise, so to have an opportunity in the DTM variant is nirvana. Bernd Maylander, F1 safety car driver and former DTM wheelman, is my pilot, and drives the first lap “efficiently,” adhering to the clean racing lines. He does the second lap “the fun way,” which is sideways. “When I’m done with my career as the safety driver, at my last race, I would love to slide across the finish line like this,” he shouts over the din of a giant, smoky drift around a corner.

A full fire suit and HANS (Head and Neck Support) device is required to climb into the 2019 Mercedes-AMG GT3, and when the 550 hp, 6.2-liter V-8 barks to life, my spine tingles. Championship driver Adam Christodoulou peels out of pit lane and rips into the first corner. Of all the stimuli attacking your senses—the cacophony of noise, the heat, the chunky shifts that reverberate through your torso—the downforce is the most impressive. The GT3 is tidily planted through nearly every corner, at staggering speeds. My helmet pings off the roll bar as Christodoulou hustles through a tight chicane.

There’s one final treat, and it’s a humdinger: a 2018 Mercedes-AMG C 63 DTM monster. On a pass-by lap just before my stint, this 500 hp V-8 sounds like the gates of hell opening up when at full throttle. Given the car’s low profile and the sturdy roll cage, ingress is a messy affair for my 6’2” frame, the struggle ending only after two of the pit lane workers literally shove me into the machine.

My pilot is Esteban Ocon, a F1 racer currently serving as a Mercedes reserve driver, and the moment I’m belted in, he fires it up. I’ve ridden in more than a few race cars, but I have never felt an engine vibrate the whole vehicle as violently as this sled. The shaking is so intense, even at idle, you feel like you’re sitting on top of a washing machine that’s trying to rip itself apart. It’s deafening in the cabin, so it’s no wonder that Ocon doesn’t respond when I shout to ask if this affects him in any way. He simply can’t hear me. He buries his foot and we fly out of the pits.

At speed, the vibrations only intensify and, by the first corner, my body feels numb from the humming and my vision is slightly blurred. Ocon eviscerates every corner, putting the inside wheel squarely on the back of the curbing at the apex. His astounding precision is relentless and while I slowly shake apart, he comes more alive. Even with the buzzing chassis, it’s so rigid you can still feel the smallest pebble on the tarmac. Nothing fazes the 22-year-old driver, so we press on to the right-hander before the front straight. He nails the brakes so hard, I’m worried my contact lenses are going to pop out and stick to the windshield. When it comes to the first corner after the straight, it requires that every car I’ve been in thus far requires a light lift to set the nose down and help the car bite into the turn. Not the C 63 DTM. Ocon takes it flat out, and the lateral G-forces mash my organs together, somewhere on the left side of my body. And this is just Ocon’s warm-up lap. The succeeding one is faster and more savage. When I’m plucked from the C 63, I’m shaky but there’s a goofy grin that won’t leave my face. It’s no wonder that this car notched a triple victory in the 2018 DTM season.

If the last 125 years of Mercedes-Benz and Mercedes-AMG’s motorsports accomplishments are any indication, the next 125 promises more podiums, trophies, and justly deserved reverence.