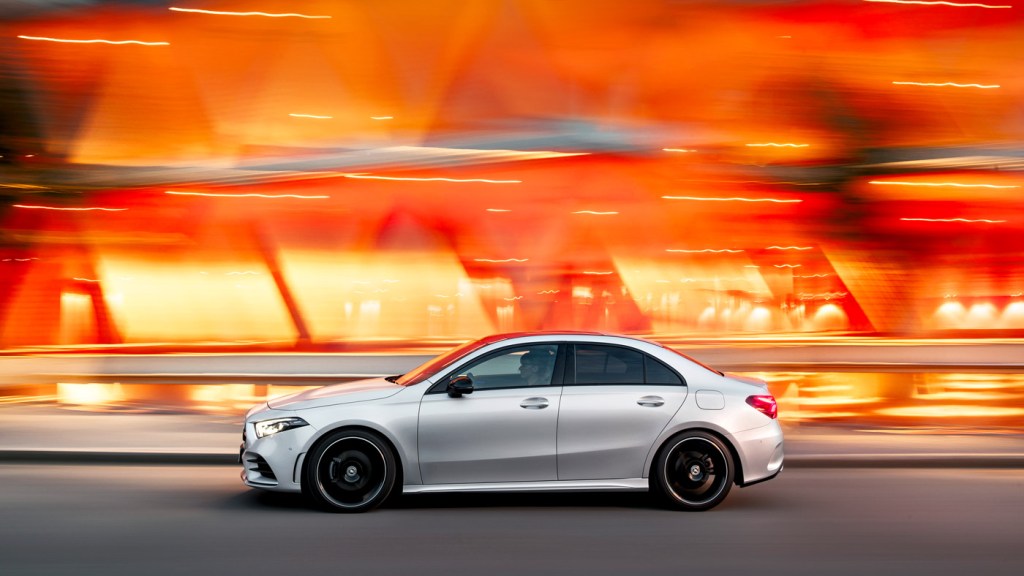 “This will establish an all new gateway to our brand for those who are young, and those who are young at heart,” Exler said. The A-Class has been available in Europe for years, but looked much different in its previous incarnations. Once a small hatchback described by a German engineer as “a car for old people,” the A-Class has now transformed into a sharp, modern machine aimed at a new generation.

Compared with the CLA, the new A-Class is about four inches shorter, but rides on a wheelbase that is about an inch longer. This not only makes the car visually more appealing, it promises tighter handling and proportionately more interior space. The A-Class design follows the clean, minimalist language recently favored by Daimler AG’s chief design officer Gorden Wagener and his team, examples of which can be found on the new CLS and S-Class models. “If it looks good, take a line away. If that looks good, take another line away,” Wagener has said. Gone are the dramatically creased, swoopy lines of the CLA, replaced by taut and subtle sculpting. The front end wears the wide-mouthed Mercedes grille with an integrated three-point star. Exler claims the A-Class has achieved the lowest drag coefficient of any of the marque’s production vehicles, which aids performance and fuel economy.

In another first for the company, Mercedes-Benz is loading up its entry-level car with the most advanced technology features, normally reserved for the most expensive models. The A-Class will not only get all of the semi-autonomous driving capabilities found on the current S-Class, it is also the first to incorporate the new MBUX interface, which uses artificial intelligence and natural language recognition. According to Exler, the system learns the driver’s behavior including preferred destinations, favorite music, and frequently called contacts. Commands can be initiated by saying “Hey Mercedes” followed by whatever the driver wants to do, like change the temperature, set the navigation, or the like. Safety features include an improved camera and radar system that can detect people and objects more than 1,600 feet ahead.

When it goes on sale later this year, the A-Class will be available as an A 200 model powered by a 2-liter, turbocharged inline-4 good for 188 hp and 221 ft lbs of torque. The engine is paired with a seven-speed dual-clutch transmission.  A 4MATIC version configured with all-wheel drive will also be available.