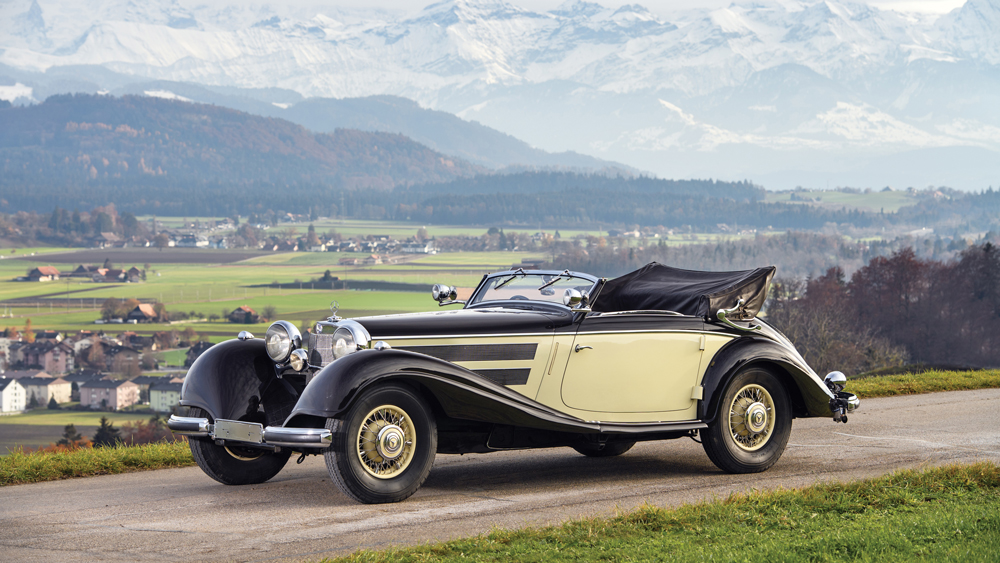 As automotive and motorcycle enthusiasts flocked to Essen, Germany last month for Techno Classica Essen—Germany’s annual vintage auto and motorcycle show—so, too, did discerning and well-heeled collectors, as RM Sotheby’s hosted its inaugural Essen auction. More than 200 collector automobiles, both classic and contemporary, were offered for sale during the event, including almost 100 models from the host country. In the end, two exceptional examples of classic German engineering rose to the top, each one selling for more than $1 million.

1937 Mercedes-Benz 540 K Cabriolet A by Sindelfingen

Unveiled at the Paris Auto Salon in the fall of 1936, Mercedes-Benz’s supercharged 540 K immediately distinguished itself from most other grand touring models of the era. The brand’s chief engineer, former racing driver Max Sailer, made sure that the car’s 5.4-liter straight-eight engine could deliver enough horsepower—in this case, the output peaked at 180 hp—to propel the car beyond 100 mph. In fact, the 540 K was so capable that the automaker kept racing driver Goffredo “Freddy” Zehender on retainer in the UK to serve as a technical advisor and demo driver.

The example that rolled across the RM Sotheby’s block is one of 32 opulent, Cabriolet A-style tourers built by Sindelfingen, of which only 18 are believed to still exist. This survivor is particularly noteworthy for being essentially a matching-numbers car, one that boasts its original chassis, engine, gearbox, and bodywork. “Most people would consider the chassis to be the true identifier of a car’s identity,” explains Gord Duff, the global head of auctions for RM Sotheby’s. “If you don’t have the original chassis then you can argue that you don’t have the original car.”

The 1937 Mercedes-Benz 540 K Cabriolet A by Sindelfingen presented by RM Sotheby’s.  Photo: Courtesy of RM Sotheby's.

Aside from its high level of originality and authenticity, this 540 K—which sold for 2.25 million euros (about $2.5 million)—is a desirable prewar classic based on the model’s reputation alone. “The 540 K is the embodiment of style and performance and incredible build quality,” Duff says, adding that the period in which the car was built—a time of European racing dominance for Mercedes-Benz—was the “golden era for the marque.”

Two decades after Mercedes-Benz wowed motoring audiences with its 540 K, the German automaker once again captured auto enthusiasts’ attention by unveiling an open version of the brand’s now-iconic Gullwing 300 SL. Already the fastest street legal car of its day (not to mention the first production car to incorporate fuel injection technology), the 300 SL in its new roadster form delivered more practicality and better performance than its Gullwing predecessor.

Following substantial mechanical and cosmetic restoration projects executed in 2014, the 1959 Mercedes-Benz 300 SL Roadster that sold for 893,750 euros (about $1 million) offers its new owner a sublime motoring experience. “The 300SL is one of the most iconic sports cars of the 1950s,” says Duff. “Fast and stylish, they are wonderful cars to drive. Although the Gullwing is often the more coveted of the two, it is the roadster that provides the better driving experience, being lighter and with a far cooler and less crammed cabin.”