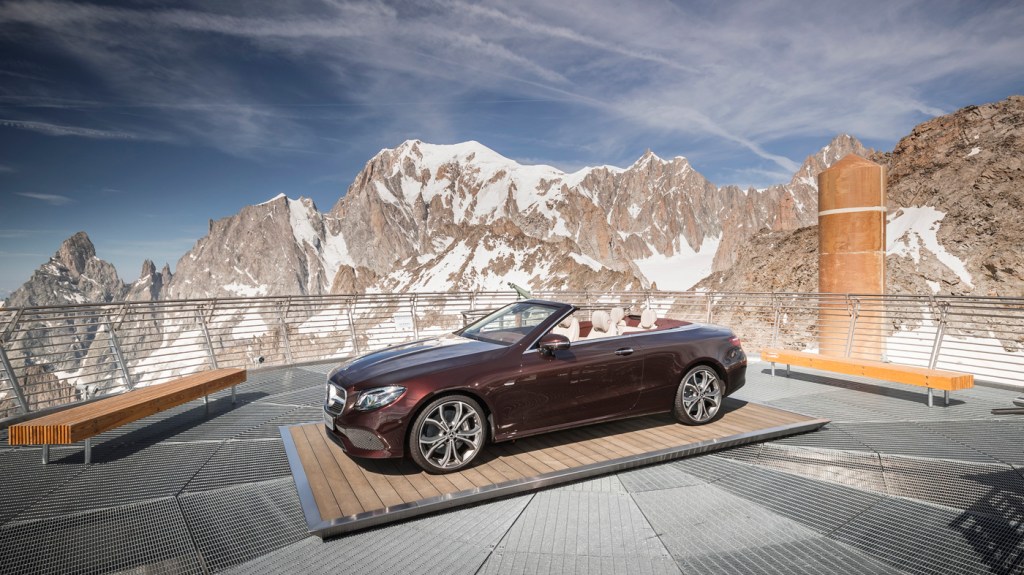 The new Mercedes-Benz E-Class Cabriolet is perched nearly 11,400 feet above sea level against a backdrop of snow-capped mountains. Here on the observation deck of Pointe Helbronner, the convertible’s rubellite-red paint—a deep, metallic burgundy—contrasts against the gray and white face of Mont Blanc, the highest peak in the Alps.

The cabriolet is the latest variant of the redesigned E-Class, which made its debut last year in sedan form and was later followed by a wagon, high-performance AMG models, and a coupe. At a time when more buyers are eschewing cars for SUVs, Mercedes-Benz remains faithful to top-down driving with convertible versions of all of its core models, plus a handful of roadsters. “In the 1980s, convertibles were practically nonexistent,” says Frank Thiess, head of development for the E-Class Cabriolet. Now, he says, convertibles are as desirable as ever.

A Mercedes-Benz E400 Cabriolet alongside its rarified ride to Pointe Helbronner in the French Alps.  Photo: Courtesy Mercedes-Benz.

To reach its current resting place, the example under our scrutiny was airlifted onto its platform by helicopter—a precarious endeavor that required careful planning and 20,000 euros. The rest of us made our way via the Funivie Monte Bianco, a newly built cableway whose glass-and-steel station looms atop the rocky precipice like a villain’s lair from a James Bond film.

While many current Mercedes-Benz models are rife with creases and swoops, the E-Class Cabriolet reflects a simpler, pared-down design approach. “The side [of the car] is totally new, without the character line of the sedan,” says Uwe Haller, project manager for the E-Class Cabriolet’s exterior design. “The thinking now is, if it looks good, we take a line off. If that looks good, take another line off.”

The result is a clean yet elegant surface that allows smaller details to do the talking. These include a polished aluminum trim that runs around the beltline and flows into the interior. “If you look at the car from a drone, it looks like a yacht,” Haller says.

Haller is especially proud of the cabriolet’s taillights, which have a “crystal optic” surface that sparkles like thousands of tiny rubies. Not only are they beautiful, Haller explains, but they also emit the same intensity of light from every angle—something that’s particularly difficult to achieve.

Just as building a cableway that scales some of the world’s highest peaks requires superlative structural integrity, creating a well-mannered convertible is an engineering feat in its own right. To that end, engineers started with a stiffer body and added horizontal crossmembers, a reinforced apron, and stronger side rocker panels. Back on the ground and in our own test cars, we felt the cabriolet’s sturdiness on a drive from Courmayeur on the Italian side of Mont Blanc, winding our way through France’s Haute-Savoie region toward Geneva.

The author cruises through the French countryside while behind the wheel of the E400 Cabriolet.  Photo: Dieter Rebmann for Mercedes-Benz.

In the United States, the E-Class Cabriolet will be available as an E400 model, powered by a 3-liter biturbo V-6 engine that is good for 329 hp and 354 ft lbs of torque. In concert with a new 9-speed automatic transmission, the E400 is well suited to cruising France’s fast highways and little two-lane roads, offering enough power to pass vacationers hauling boats headed for nearby Lake Annecy. Optional air suspension, meanwhile, keeps us grounded and comfortable.

The cabriolet is also fitted with the same semi-autonomous features as in the E-Class sedan, which can steer, accelerate, and stop the car automatically, given the right circumstances and road conditions.

We’ve raved before about the E-Class’ new interior, with its dual widescreen displays across the instrument panel and its luxe interior finishes. Our 25th-anniversary-edition cabriolet is fitted with all of these, plus gorgeous open-pore, elm-wood trim that pops among Macchiato Beige leather upholstery. Seats in the cabriolet have sun-deflecting properties that help keep them cool on this hot summer day, and rear seats fold down to accommodate an ever-growing cache of French cheese.

With the top down, wind is greatly reduced inside the cabin, thanks to windscreens above the windshield and in the rear. When the afternoon sun becomes too much to bear, the fabric soft-top can be raised in 20 seconds at speeds of up to 31 mph.

The 2018 Mercedes-Benz E400 Cabriolet is expected to arrive in U.S. dealerships late this year in both rear-wheel-drive and all-wheel-drive versions. Pricing starts at $66,300.