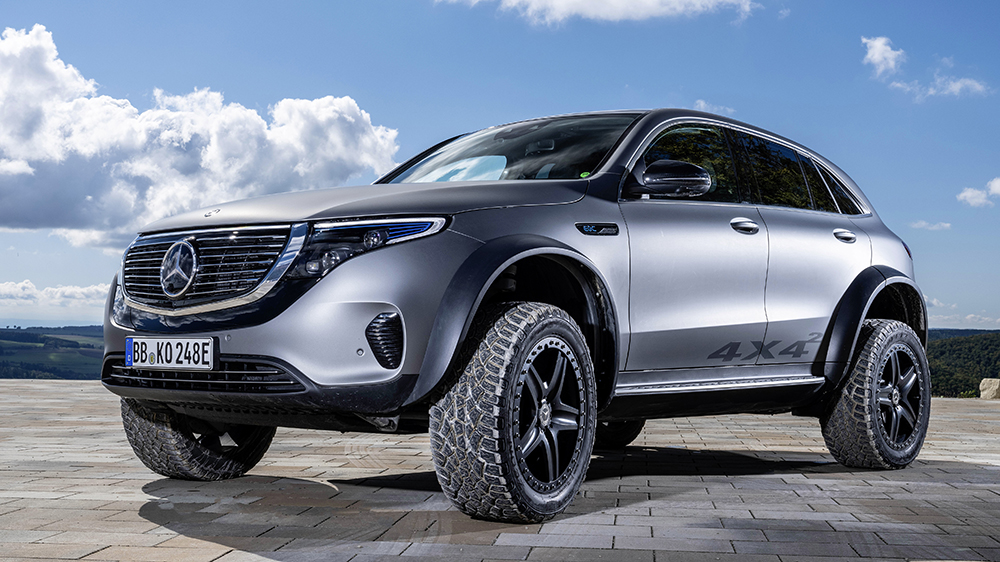 When it comes to speed and towing capacity, it’s becoming increasingly clear that anything a gas-powered vehicle can do, an EV can do, too (and maybe even better). But what we haven’t seen yet, is whether or not they can off-road like a gas-guzzling utility vehicle. Mercedes-Benz’s latest concept vehicle, the EQC 4×4 Squared, suggests that won’t be a problem either.

For its latest exciting prototype, the German automaker has taken its first fully electric vehicle, the EQC crossover, and really cut loose. The result is a concept that looks like a battery-powered monster truck and sounds like a whole lot of fun.

The EQC 4×4 Squared’s cartoonishly beefy look is thanks to two major modifications. The first, and most impactful, is that the crossover’s suspension has been swapped out for one featuring portal axles. This raises the vehicle’s ground clearance from 5.5 inches to 11.5 so that it can now drive through more than 15 inches of water. It also boosts the SUV’s approach and departure angles to 31.8 degrees in the front and 33 in the rear, more than the G-Wagen. Second, the SUV’s been outfitted with massive fenders in the front and back to account for its larger, rock-chewing tires, allowing it to deal with that mud and water that you’ll be spraying.

Those aren’t the only changes, though. Mercedes says its also given the EQC’s sounds a significant overhaul. Interior acoustics have been tweaked to minimize outside noise, while the set of speakers has been integrated into the headlights so that any pedestrians wandering around the forest or desert will hear you coming.

No word yet on whether the powertrain has been altered. But that’s probably because the EQC can already put up some decent numbers. The standard version of the crossover, which has the potential to be the brand’s most important vehicle, features a powertrain mated to a 80 kWh battery pack that can produce 402 horses and 561 lb-ft of twist. It can do all this and while easily exceeding 200 miles on a single charge, though we expect some time in the mud might pull its range back down to earth.

As with most concepts, we wouldn’t hold our breath waiting on the EQC 4×4 Squared to make its way to dealerships. Of course, given how the brand’s battery-powered EQ line is expanding, anything is possible. Just last week, the automaker announced six new additions to the range, including the flagship EQS sedan and SUV, the EQE sedan and SUV, the EQA crossover and the EQB hatchback.