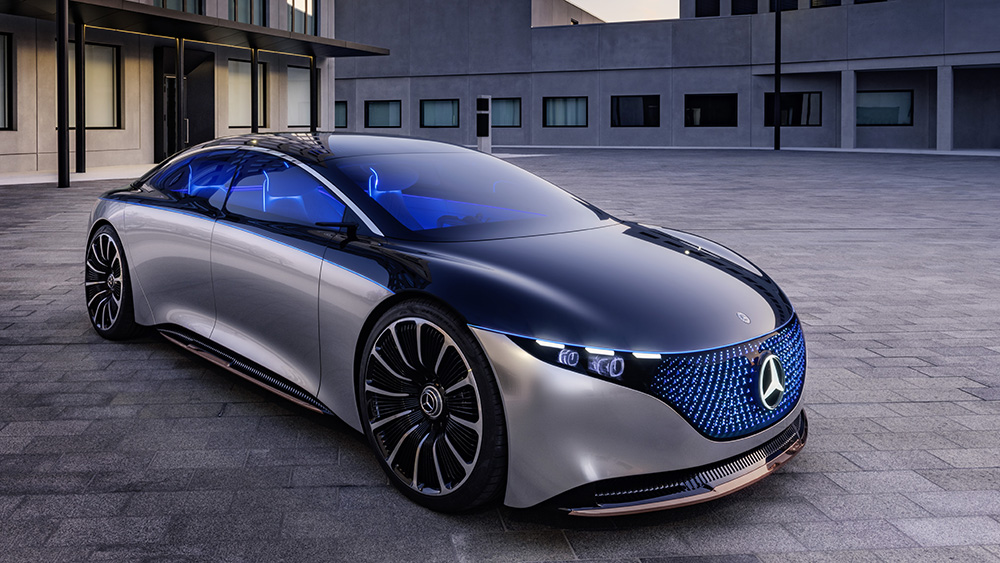 Unveiled this week at the 2019 International Motor Show Germany in Frankfurt, the Mercedes Benz Vision EQS concept shows the future of an electric S-Class-like sedan with a radical new design and a range of 435 miles.

“Our flagship cars have always been the trend setters and brand ambassadors,” says Ola Källenius, head of Mercedes-Benz. “Our customers expect the S-Class to be the vanguard of innovation, the Mercedes of Mercedes.”

Following in the footsteps of previous concept cars such as the EQ Silver Arrow, the EQS employs a reduced, organic shape that its designers call a “sensual sculpture.”

“The purpose was to design a super luxury architecture which is very different to what we have on the current S-Class,” explained Gorden Wagener, chief design officer for Mercedes-Benz, as he took us on a walk-around in Frankfurt. “For the people who want to say, ‘it’s electric, but I’m still driving a futuristic, sexy car.’”

The stretched, two-toned body has no visible door handles and is defined by a thin, ambient “light belt” that runs around the entire circumference of the car (reminiscent of the interior ambient lighting in current Mercedes production vehicles). “The next level in our [design] language is you don’t see any lines anymore, it’s all sculptural,” says Wagener. Digital headlights use holographic lens modules that rotate at more than 2,000 rpm to create a floating, 3D appearance. The front grille and rear tail lights are comprised of hundreds of LEDs in the shape of tiny three-pointed stars, a not-so-subtle take on the Mercedes-Benz logo.

Ola Källenius, chairman of the board of management for Daimler AG, in front of the Mercedes-Benz Vision EQS.  Photo: Courtesy of Daimler AG.

The interior, inspired by luxury yachts, echoes the design themes from the outside with sculptural seats and 360-degree ambient lighting. In renderings, the expansive instrument panel is made from sustainable, German-grown maple—which designers say is more eco-friendly than importing exotic woods—features integrated, vertical air vents and rose gold inlays.

The stretched, two-toned body has no visible door handles and is defined by a thin, ambient “light belt.”  Daimler AG

On the show car presented at Frankfurt, the dashboard is monochromatic white and doubles as a projection screen for vehicle information. Vehicle functions can be controlled by voice (a feature already found on the GLE and other recent production vehicles) or via the central touch screen. Hartmut Sinkwitz, head of Mercedes-Benz interior design, says he is particularly proud of that screen, which appears to be floating and is sharply angled for easy reach and viewing.

Vehicle functions can be controlled by voice or via the central touch screen.  Daimler AG

The EQS uses two electric motors (one on each axle) that make a combined 469 hp and 560 ft lbs of torque, with a zero-to-60 mph time of less than 4.5 seconds. The EQS has variable all-wheel drive and an estimated range of up to 435 miles. With high-speed (350 kW) charging, the EQS can charge to 80 percent in 20 minutes.

Many of the concept’s visual elements will carry over to future production cars from the marque.  Daimler AG

The EQS isn’t merely a design exercise; Mercedes-Benz executives say many of the visual elements will carry over to future production cars. Källenius also promised that about half of all Mercedes-Benz vehicles will use some form of electrification by 2030.