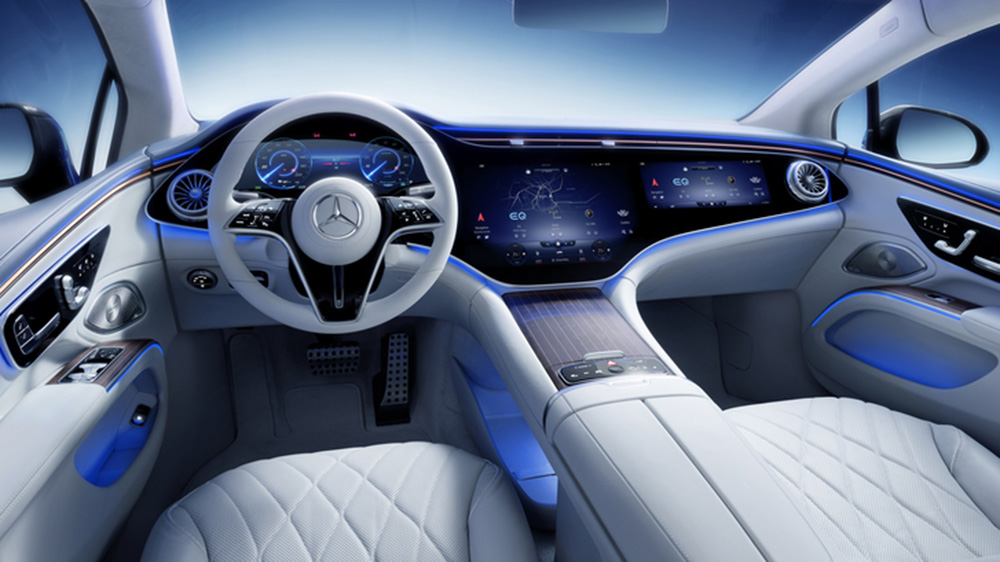 Mercedes-Benz has promised the future with the upcoming EQS EV, and based on what we’ve seen so far, they just might be able to deliver.

The German automaker shared the first detailed images of the all-electric sedan’s interior over the weekend, and the results look like something out of a movie. The touchscreen-centric design blends state-of-the art technology with luxury in a way that few marques have matched.

The pièce de résistance, of course, is the massive, dashboard-spanning Hyperscreen. Measuring 56 inches across, and offering up 377 square inches of visual space, the screen is made up of three displays—a 12.3-inch digital gauge cluster, a 17-inch infotainment screen and a 12.3-inch passenger screen—and features nary a physical button. It will allow you to do everything from check maps, adjust the climate control settings and select entertainment options. And when one of the displays isn’t in use, the Hyperscreen can display ambient backgrounds that can be matched with the interior cabin lighting.

As impressive as the Hyperscreen may be, some are sure to wonder if they really need all that visual space. If this is you, fret not, because the dashboard-spanning glass display doesn’t come standard. The base-level configuration includes a 12.3-inch digital gauge cluster positioned within the driver’s cockpit and a 12.8-inch vertical infotainment touchscreen that almost appears to float above the center console. This set-up, which is similar to the one found on the new S-Class, isn’t quite as breathtaking, but will still turn heads.

Mercedes hasn’t forgotten about the rest of the cabin, either. Flowing lines travel from front to back and both sets of seats are covered in quilted leather and Neotex (which looks like a combination of nubuck leather and high-tech neoprene) and have illuminated piping that helps highlight their shape. Although it wasn’t ready to reveal all the details just yet, the brand said each color and trim option was chosen to accentuate a sense of space within the cabin. There are also several laser-cut, backlit elements throughout the interior designed to create a night-time ambiance when the sun goes down.

Finally, there are a series of special soundscapes that will fill the cabin while you drive. The EQS, like other EVs, has a silent powertrain, so Mercedes developed two soundscapes that will play from the car’s Burmester audio system whenever it’s in motion. The first of these is called Silver Waves, and is described as “sensuous and clean,” while the second, Vivid Flux, is described as “crystalline, synthetic yet humanly warm.”

After months of teasing, Mercedes will finally debut the EQS, which can go 435 miles on a single charge, on April 15. And if the images of its interior are any indication, it might just deliver a taste of luxury’s future.