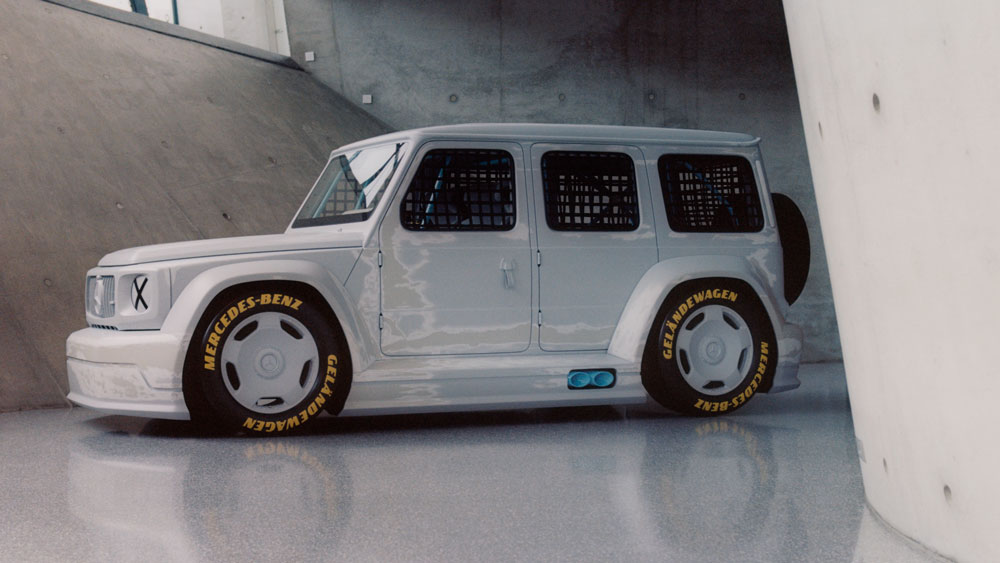 A collaboration between Gorden Wagener, Mercedes-Benz’s chief design officer, and Virgil Abloh, chief creative director and founder of Off-White as well as the men’s artistic director of Louis Vuitton, has resulted in a Mercedes-Benz G-Class like never before.

“My ultimate goal in this project with Mercedes-Benz is inspiring young artists, engineers, designers to question the status quo,” says Abloh.

And inspiring, it is. It’s no secret that the Mercedes-Benz G-Class has become standard-issue vehicular fare among drivers seeking the most exclusive SUV that looks like a tank, with an MSRP that rivals more traditional ultra-high-end automobiles.

Exclusive models like the 4×4 “G-Wagen-on stilts” and the astronomically priced Mercedes-Maybach Landaulet have pushed the G-Wagen into formerly uncharted territory. Now, Project Geländewagen imagines the iconic box-shaped Benz as a race car, putting the stalwart SUV in a whole new perspective. We asked both designers to expand on the project and elaborate on their shared vision for the future of luxury.

What was the inspiration behind Project Geländenwagen?

Gorden Wagener: The G-class is the most iconic car that we have at Mercedes-Benz, and Virgil and I both drive the Mercedes-AMG 63. We started the design process by analyzing its DNA, breaking it down to its essence to find out what makes it so iconic. The foundation of the approach was how far can we push the G-class to make it look like a race car. We wanted to capture the experience of owning and driving the G-class, and the fun of power, acceleration and speed, which is how we were able offer a new and different interpretation of it.

How did you both go about reinterpreting the G-Class?

GW: The G-Class has a distinctive personality, and the re-imagination of it with Virgil only adds to this. For Project Geländewagen, the iconic silhouette is emphasized even more, demonstrating its monolithic character. Design elements are caricatured, for example with the oversized tires and spare wheel. It is one of the most-loved cars we have at Mercedes-Benz, which is why it was the perfect starting point for a joint exploration into “the New Luxury.”

“The foundation of the approach was how far can we push the G-class to make it look like a race car,” says Wagener.  Photo by Bafic, courtesy of Mercedes-Benz AG.

What parallels do you see with Virgil Abloh’s creative approach and that of Mercedes-Benz?

GW: I think Virgil and I share a passion for building modern luxury brands, neither of us are only interested in just the product. Virgil’s unique take on modern luxury has great synergy with Mercedes-Benz: it is not just about a particular product or one piece of design, but building a holistic luxury brand that captures the zeitgeist. We wanted the project to be truly collaborative, which would allow us to push the creativity of our respective fields and create a truly iconic piece of design.

According to Wagener, the concept’s design elements are caricatured, as can be seen by this display of gauges.  Photo by Bafic, courtesy of Mercedes-Benz AG.

Virgil, why is Mercedes-Benz a good fit for your creative expression on this project?

Virgil Abloh: I’ve always been interested in working with the best in class, the leader in a category or realm—not only for what they make, but because of what this product or notion means in a larger context.

What were some of the greatest challenges you encountered with Project Geländenwagen?

VA: I wouldn’t call them challenges so much as opportunities. There’s so much opportunity working with a brand like Mercedes-Benz, so much history to honor and bring back to life. Our biggest challenge was pulling ourselves back, stopping ourselves from doing too much.

The artistic concept is prepared for its debut.  Photo by Bafic, courtesy of Mercedes-Benz AG.

How did your design philosophy and that of Gordon Wagener’s complement each other?

VA: I’ve always said that my design philosophy is based in this 3 percent rule—an object only needs to be altered 3 percent from its existing form to make a different impact. Gorden embraced this fully.

“Our biggest challenge was pulling ourselves back, stopping ourselves from doing too much,” notes Abloh.  Photo by Bafic, courtesy of Mercedes-Benz AG.

A replica of Project Geländewagen will be auctioned as part of the Sotheby’s Contemporary Curated sale, with proceeds going to a charity in support of international creative communities.