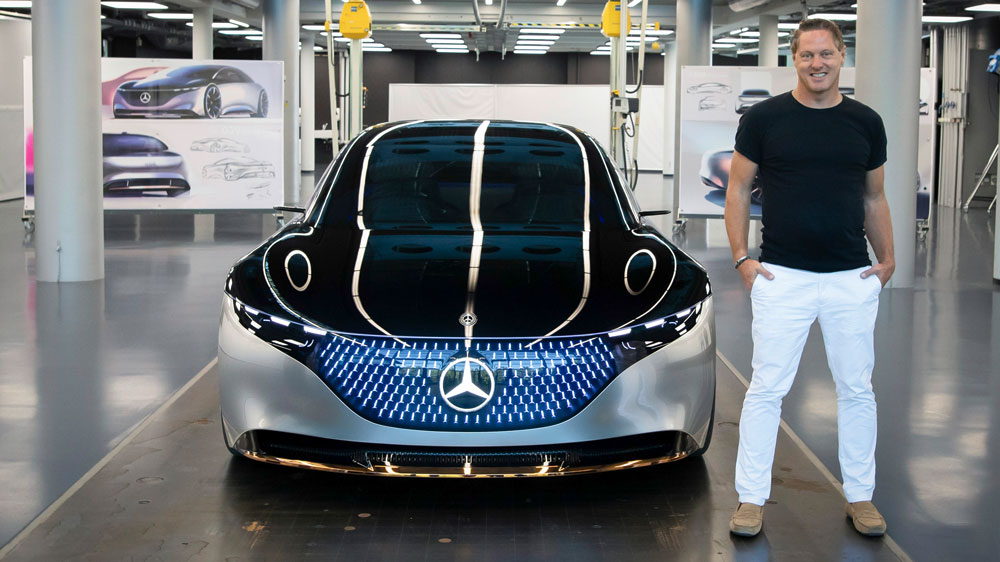 While there are stately European executive saloons with loftier price tags, Mercedes-Benz’s flagship S-Class has long been a standard bearer of automotive luxury across the globe. Bold Teutonic style, sumptuous materials and accoutrements, burly torque-churning power trains and exceptional craftsmanship are the pillars upon which Mercedes-Benz has burnished its laurels. Increasingly, however, bleeding-edge technology has separated the S-Class from its competition. So, it should be no surprise that next-level tech will be a key selling point for the next-gen 2021 S-Class, internally dubbed the “223.”

A futuristic display to showcase the latest MBUX infotainment system to be featured in the new S-Class.  Photo: Courtesy of Mercedes-Benz AG.

Recently, the marque from Stuttgart unveiled the latest shimmering tech that will define the upcoming, still as-yet-to-be-unveiled S-Class—all centering around a highly updated version of its acclaimed MBUX user interface. Already considered the Best of the Best here at Robb Report, the second generation of its learning-capable system will be more intuitive and customizable, and its “Hey Mercedes” voice-activation system open to even more natural dialogue (now supporting 27 languages).

“The S Class is always a mirror of the decade it’s in, as is the ‘222’ of this decade, and so will be the ‘223’ for the next decade,” says Gorden Wagener, the marque’s global chief design officer. “It is a very progressive time, in and outside of automotive, and therefore we wanted the next S-Class to be progressive,” he continues, mentioning how the vehicle has to appeal to everyone from tech-savvy younger Chinese customers to a more conservative American clientele. “We designed, probably, the most progressive S-Class ever.”

Hardware updates incorporate up to five large screens, a few being brilliant OLED displays that include a mammoth 12.8-inch screen with haptic feedback sitting centerfield. This portrait-fixed OLED acts as the main visual interface between you and your S-Class and, since it’s free floating, Benz engineers will be able to swap it out during the S-Class’s usual decade-long lifecycle in case a superior screen becomes available. Wagener promises that there will also be OTA updates (like a smartphone), Easter eggs and other “goodies” for a vehicle that will likely enjoy a lifecycle longer than most.

Hardware updates incorporate up to five large screens, including a few with OLED displays.  Photo: Courtesy of Mercedes-Benz AG.

There’s also an augmented-reality head-up display (AR-HUD) that creates a digital image before the driver with a virtual distance of 33 feet, emulating a 77-inch monitor. And there’s a 3-D driver display that has to be seen firsthand to be believed.

“In the non-automotive world, 3-D was already a big thing, from IMAX cinemas to 3-D screens in home entertainment,” mentions Wagener of the tech’s “wow” effect, achievable without having to wear any glasses. “We wanted to bring that new technology into the car in order to have better functionality, better information displayed . . . it’s really magic when you drive that [AR-HUD] with the lines in front of you—it’s like flying a remote-control plane in front of the car!”

Other major developments include a prioritization for rear-seat passengers, granting them access to all the extensive infotainment and comfort features as the driver via up to three touchscreens and all “Hey Mercedes” has to offer. And the suite of new digital displays allowed Wagener’s team to delete clutter from across the dashboard, removing 27 hard keys from the outgoing ‘222’ model.

Passengers at the back will have access to all the infotainment and comfort features by way of up to three touchscreens.  Photo: Courtesy of Mercedes-Benz AG.

This reductionist attitude charters the acclaimed luxury brand into the future. “There will always be opulent, because luxury is about that, but of course the meaning of luxury changes over time,” notes Wagener. He calls the S-Class’s ethos “the new opulent.” That applies to the user-interface design as well as the layout of the cabin interior.

“What you will see is definitely something that is a bit more structured, yet still, as always, whatever we do will be beautiful and will be sexy,” Wagener explains. “That is a key along our central purity philosophy: We always do something that is appealing and beautiful on one hand, but then very pure and clean on the other.”