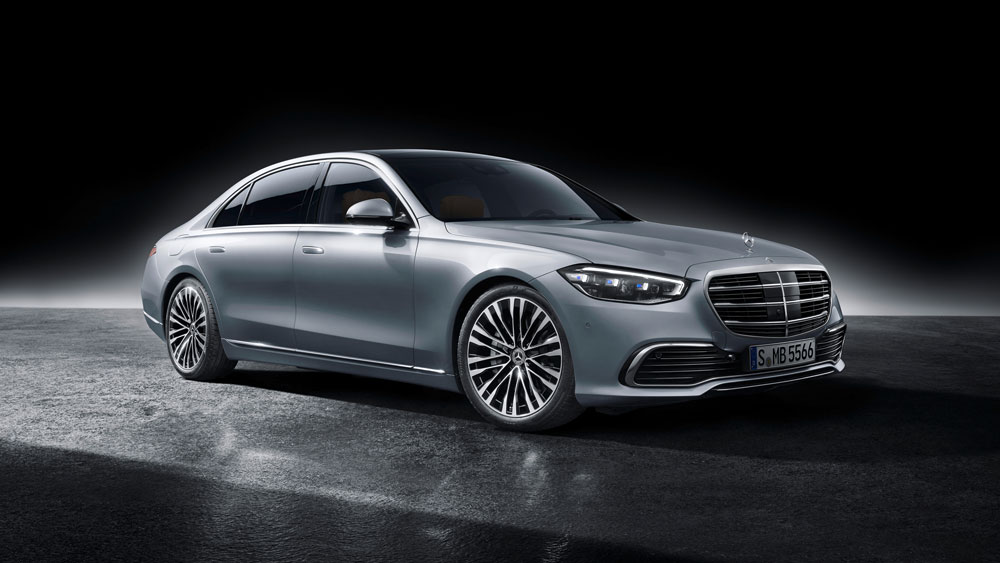 Times have changed of late, and Mercedes-Benz is rolling with the left hook swung by COVID-19 as it punches its way through “business as usual.” In the car world, new-model launches are a recurring Post-It Note on the calendar of automotive journalists, who are regularly invited by manufacturers to see and drive the latest-and-greatest. So, when one of the world’s biggest carmakers spends years developing a significant new model, one whose debut was anticipated well in advance, no pandemic can stand in the way of progress. And make no mistake, the new Mercedes-Benz S-Class is all about progress. In fact, Mercedes-Benz VP of US Sales, Adam Chamberlain, calls it “the future beyond the present.”

To reveal its flagship S-Class sedan, Mercedes-Benz hosted Robb Report for a three-hour one-on-one with Dr. Philipp Skogstad, president & CEO of Mercedes-Benz Research & Development North America, at a satellite campus in Long Beach, Calif., where he and his colleagues provided a respectfully distanced introduction to a car whose secrets reveal themselves with every new detail.

The S-Class sedan presents an image of substance, and its owners have been—from the beginning—among the most loyal of Mercedes-Benz customers. More Mercedes-Benz S-Class models are sold than any other full-size luxury sedan, with nearly 72,000 units purchased worldwide in 2019 alone. Since the first S-Class (known internally as the W116 series) was introduced in 1972, approximately 2.7 million S-Class vehicles have rolled off the Mercedes-Benz assembly line. That is a staggering number of high-rent sedans. No one can argue that the most recent W222 series cars, made from 2013 until now, wrote the primer on automotive luxury. They did nothing wrong and did just about everything right, from spritzing scented aromatics in the cabin to massaging their occupants’ nether regions.

The grille is unmistakable but not ostentatious.  Photo: Courtesy of Mercedes-Benz AG.

The new S-Class represents much more than just a model refresh. In fact, the W223 series, as it’s developers know it, represents a reenvisioned luxury platform that catapults Mercedes-Benz into the second decade of our century. As is the Silver Star tradition, the S-Class emphasis is on technology, safety, performance and understated design, with a heavy dose of unbridled luxury that would invoke the sumptuary laws of bygone eras, were such a thing as an S-Class to be had during the reign of Henry VIII.

More so than any predecessor, the shape of this new S-Class is svelte and fluid. No extraneous lines, creases or gratuitous embellishments distract from the purity of form. Its design is sober and traditionally proportioned, with a long hood, raked windshield and signature C-pillar situated atop the rear wheel. The elegant profile is enhanced by a high catwalk (the style line running the length of the car’s side shoulder) that, despite the taller roof, makes the car look lower than the outgoing S-Class.

The model’s shape is svelte and fluid, with no extraneous lines, creases or gratuitous embellishments.  Photo: Courtesy of Mercedes-Benz AG.

Its designers took joy in design details, evident in the flush-mounted door handles requiring advanced production techniques to stamp the steel doors to accept the retractable assemblies. Themselves works of art, the four touch-actuated handles offer a tactile experience akin to opening a vault, while affording aerodynamic benefits by retracting when not in use.

Two-part taillamps are tapered and integrate into fenders and trunk lid, making the rear appear wider and lower. The grille, unlike some other marques’ “look at my silly grin” design, is unmistakable but not ostentatious. Designers have retained the signature silver star atop the hood, a welcome reference to tradition in a car that its designers call “The first digital S-Class,” one with an interactive interior and intelligent drive capabilities.

Both S-Class sedans sold Stateside will feature all-wheel drive. Rear-axle steering is a particularly useful option, reducing the turning circle to under 36 feet, a reduction of six feet—huge when navigating city traffic and parking. Three optional trim levels are available. The Luxury Line, AMG Line and Executive Line (available only on the S580) incorporate luxury or sporty appointments specific to each package.

The cabin is complemented by the second generation of MBUX, which incorporates up to five screens.  Photo: Courtesy of Mercedes-Benz AG.

The layout of the large and spacious interior is anchored by a central tunnel, whose waterfall design features a 12.8-inch floating glass touchscreen that is the heart of the user experience. A 12.3-inch screen—the traditional dashboard instruments configurable to taste—replaces the much wider version of the outgoing car. Rear-cabin touchscreens mirror those for the front passengers. Seats and door panels are detailed with diamond-quilted leather contrasted with shiny trim. The interior also features expansive glass surfaces and beautifully integrated ambient lighting, which utilizes 250 LEDs tastefully integrated into door panels and throughout the cabin to reinforce visual warnings, including lane obstructions.

Most notable, however, is the second generation of MBUX (Mercedes Benz User Experience), which incorporates up to a quintet of screens in the cabin, including 3-D spatial perception of the vehicle in its surroundings, and a large head-up display with augmented reality content, where, for instance, navigation is enhanced with animated arrows that are precisely projected onto the map of the road ahead. Processing power, which is 50 percent greater than the previous system, enables fairly seamless voice control. Just say “Hey Mercedes” and the car comes alive to serve without complaint.  And since audio entertainment is a big part of the luxury experience, an available Burmester 4D surround-sound system incorporates 30 speakers and eight resonators, with sound intensity tailored for each seat.

Rear-cabin touchscreens mirror those for the front passengers.  Photo: Courtesy of Mercedes-Benz AG.

Mercedes-Benz also continues to be on the leading edge of safety advancement. The E-Active Body Control Suspension, optional in 2021, is a brilliant system that detects the impending side impact from an oncoming vehicle or rampaging pachyderm, elevating occupants by raising the entire car within tenths of a second, subjecting the most robust structures of the vehicle to impact forces. Optional rear passenger airbags are an industry first and deploy from the front seat backs to envelop rear passengers in the event of a severe frontal collision.

We look forward to a first drive when the S-Class arrives in US dealerships during the first half of 2021. While its price is yet to be announced, we anticipate it will be within the range of current models, while offering advancements on every front. After all, that Mercedes-Benz formula for success has ensured the popularity of the S-Class for nearly five decades.