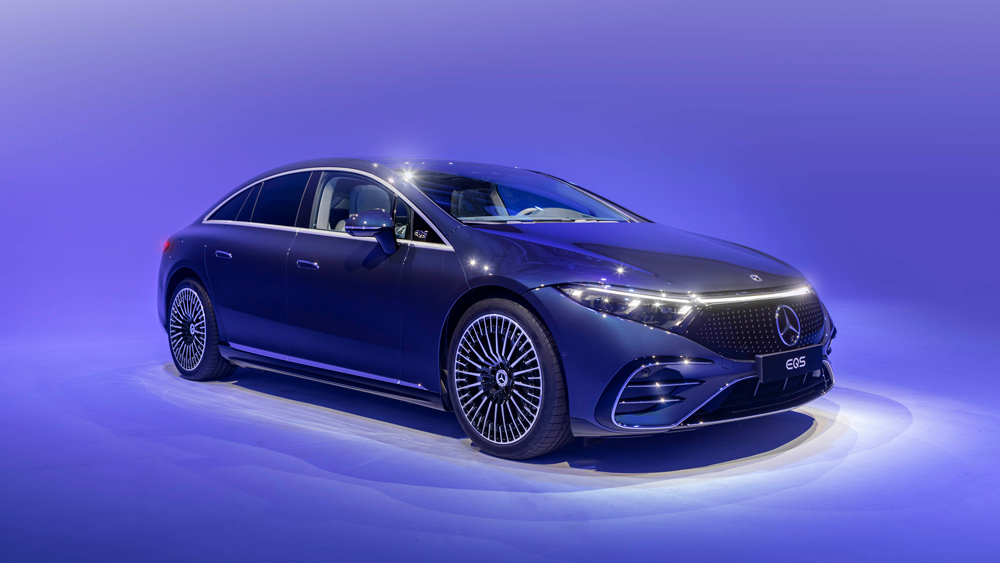 The history of Mercedes-Benz and the development of the automobile’s internal combustion engine are practically one and the same. After all, the year 1885 saw Carl Benz’s Patent-Motorwagen with its solitary cylinder, followed in 1901 by Daimler-Motoren-Gesellschaft’s early power plant, the Mercedes 35 hp.

So it’s not surprising that the German marque wasn’t the first to jump on the zero-emissions power train, but when it did, expectations were that the result would wear the three-pointed star brilliantly. That certainly appears to be the case with the Mercedes-Benz EQS revealed on Thursday. 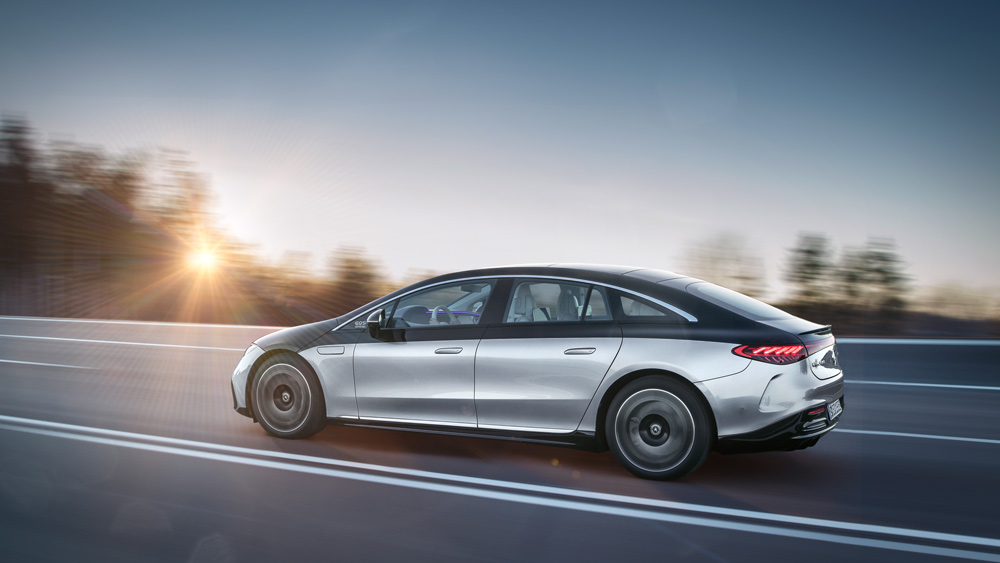 Touted as the automaker’s “next generation of progressive luxury,” the first all-electric production vehicle from the company is basically a battery-powered S-Class sedan based on the F 015 concept from 2015 and, most notably, the Vision EQS concept from 2019. “Mercedes EQ stands for industry-leading innovation, design and features grounded in artificial intelligence to tailor the experience for our customers,” noted Dimitris Psillakis, president and CEO of Mercedes Benz USA, prior to the debut. “With powerful and efficient systems, highly intelligent and adaptive functions and sustainable yet luxurious details, our Mercedes EQ models will unite performance, luxury and sustainability in the most progressive way.”

Available as the 329 hp EQS 450+ and the 516 hp EQS 580 4Matic, the production model features Mercedes-Benz’s modular electric power-train platform featuring permanently excited synchronous motors, one at the rear axle in the 450+ and two (located at the front and rear axle) in the 580 4Matic, which also continuously varies torque distribution between both motors for optimal energy use. 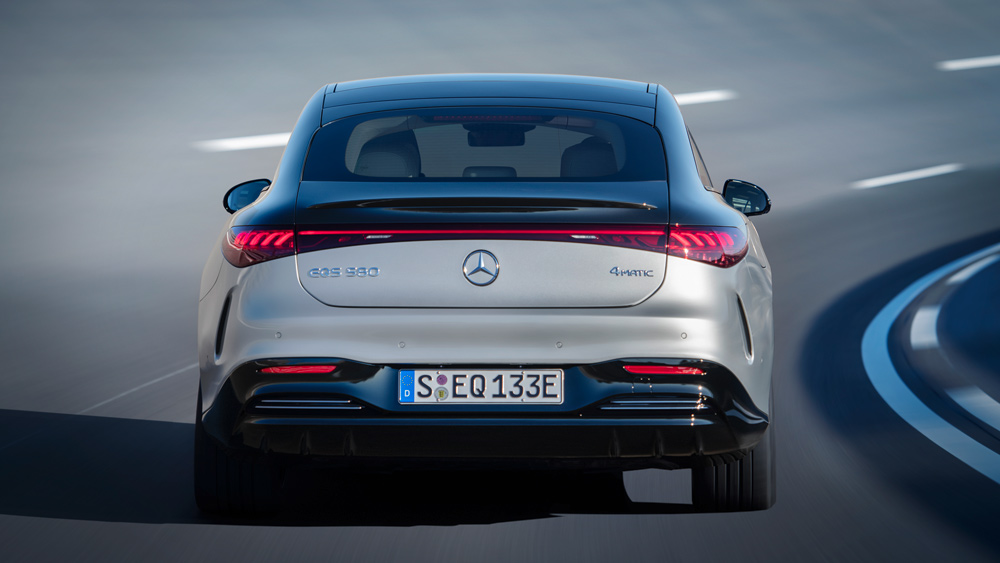 One of two versions initially available, the EQS 580 4Matic will have 516 hp from two permanently excited synchronous motors.  Photo: Courtesy of Mercedes-Benz AG.

The needed juice is poured out from a 107.8 kWh lithium-ion battery configuration that allows for an impressive range of almost 480 miles and the capability of replenishing to 80 percent in 35 minutes with a DC fast-charging station. With a 240-volt wallbox, however, the timeframe for a 100 percent recharge bumps up to a little more than 11 hours. To alleviate range anxiety, Psillakis promises “every customer integration into the largest public charging network in the US, for a seamless ownership experience.”

According to Sylvain Wehnert, vice president of design for Mercedes-Benz Research and Development North America, what’s also intended to be seamless is the vehicle’s overall aesthetic, and the lack of a conventional engine allowed for more creative expression. “It looks completely different than what you would think of as a Mercedes S-Class,” he mentions during a recent walk-around preview of the car. Immediately catching the eye is the taut silhouette, a bow design that Wehnert explains came from the desire to have “one line that starts from the front and stretches all the way to the back of the car, the whole greenhouse is stretched.” 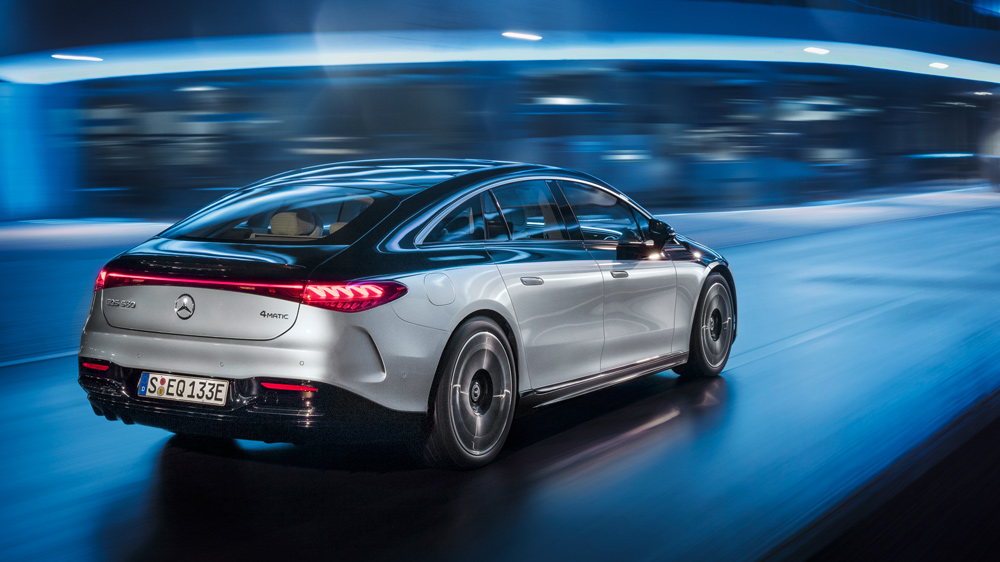 It’s a simple, sweeping design element that Wehnert credits with contributing to “an aerodynamic coefficient of 0.20, which sets a new standard for production vehicles.” He adds: “When you’ve got these nice proportions, you really don’t need a lot of features. Due to the fact that we don’t have a big combustion engine in the front, we shortened the hood and brought the A-post forward, giving more space to the customer.”

Another departure from convention is the front end’s art installation where a grille would normally be required. The black panel extending across the nose is bedecked with an array of the marque’s official star logo in miniature. The presentation conceals the host of cameras and sensors, including radar and lidar. At the front flanks are the brand’s high-definition Digital Light smart headlamps connected by a continuous LED band above. 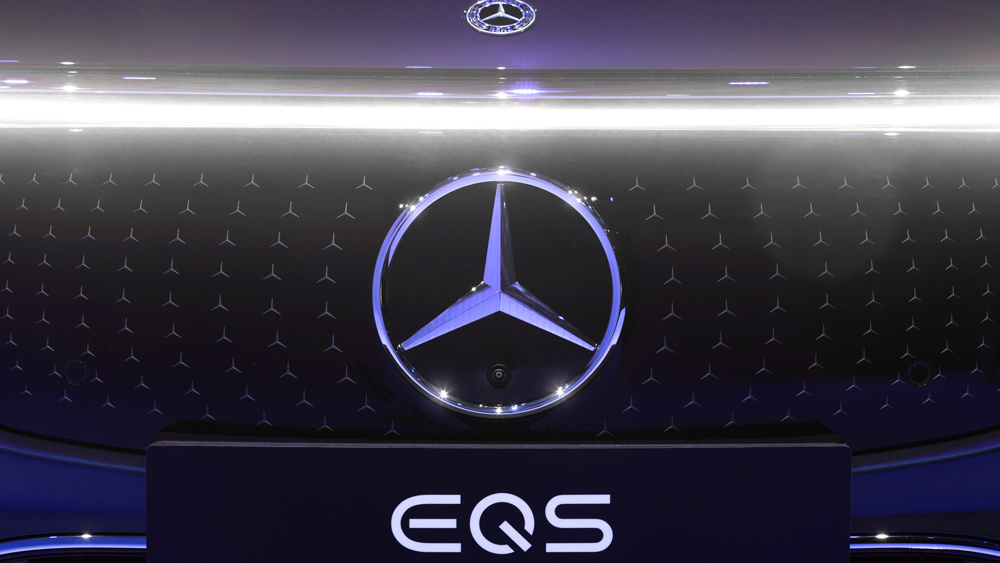 An array of the marque’s official star logo in miniature, complemented by an LED light bar, replace a conventional grille.  Photo: Courtesy of Mercedes-Benz AG.

At the back is a similarly impressive display. Another span of illumination across the deck lid seemingly spills into the taillights, which are reflective of early Edison bulbs. Daimler’s chief design officer, Gorden Wagener, refers to their helix-styling as “almost like an electric shock, so it visualizes electrical power glowing in the vehicle.” 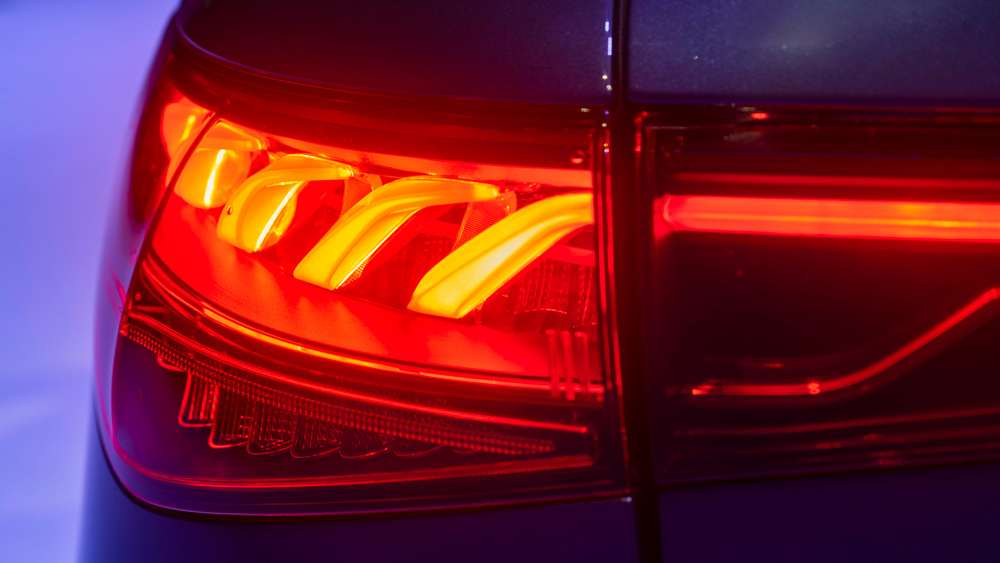 Illumination across the deck lid seemingly spills into the helix-styled taillights.  Photo: Courtesy of Mercedes-Benz AG.

Yet the real buzz already generated by the EQS focuses on the interior. “While the outside is guaranteed to turn heads, the inside is sure to blow minds,” Psillakis comments. He’s specifically referencing the ground-breaking 56-inch MBUX (Mercedes-Benz User Experience) Hyperscreen that spans the entire dash and features a curved-glass display presenting three OLED screens. 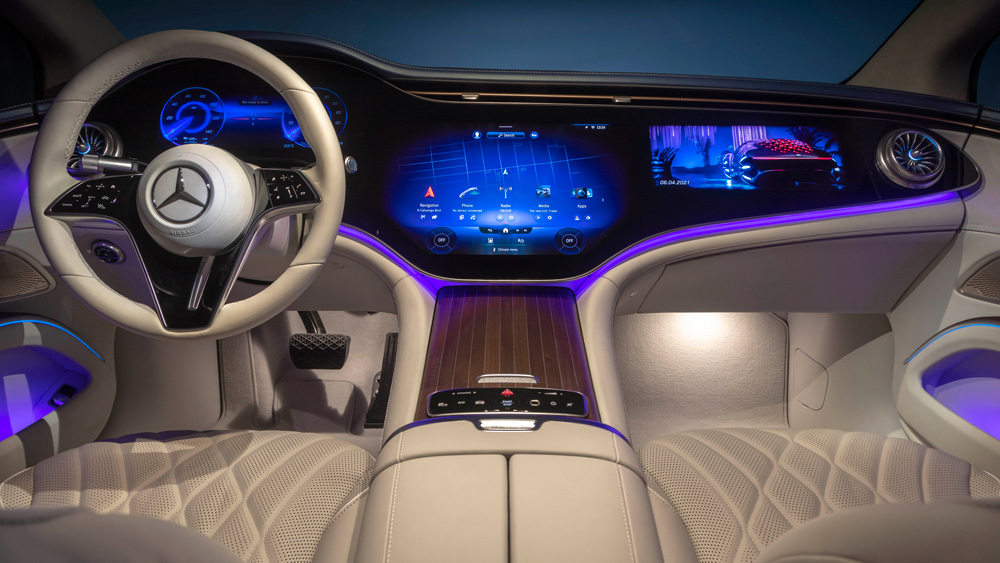 The 56-inch MBUX Hyperscreen is a curved-glass display that comprises the entire dash.  Photo: Courtesy of Mercedes-Benz AG.

The Hyperscreen’s functionality includes a head-up display and navigation that both use augmented reality, the “Hey Mercedes” voice recognition system and a new Zero Layer that showcases the driver’s most often used applications on the central panel, continuing to refine the selection based on observed behavior. And the system is capable of keeping track of up to seven driver profiles—remembering individual preferences—that can be accessed via fingerprint or facial recognition. 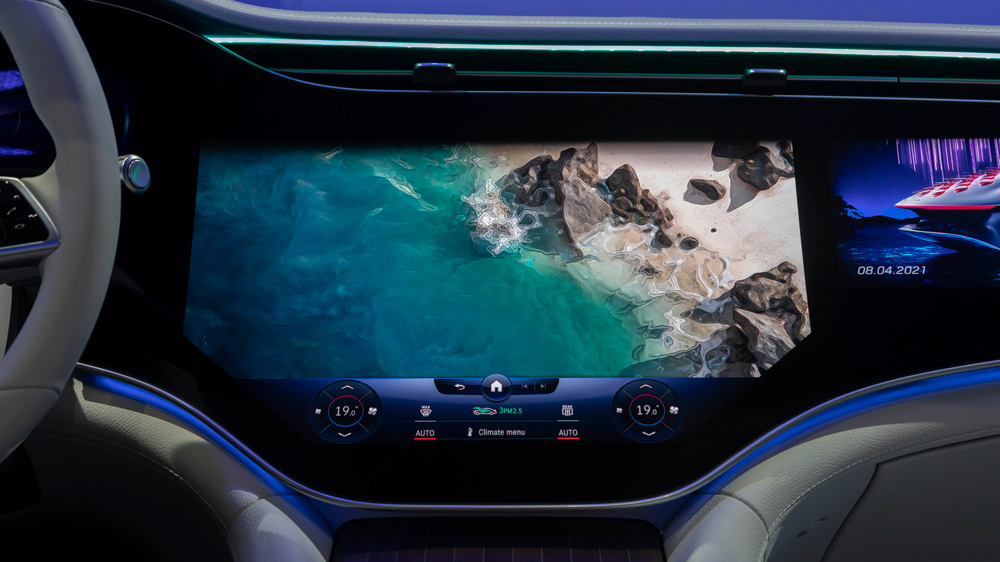 Sounds of the Sea is one of three new sensory programs offered on the EQS.  Photo: Courtesy of Mercedes-Benz AG.

A HEPA filtration system keeps the cabin air clean, while a wellness component further enhances the ambiance with massaging seats and the programming of new soundscapes—Summer Rain, Forest Glade and Sounds of the Sea—complete with visuals. “These are three EQ-specific natural environments where you can totally relax after a stressful day,” explains Stephan Aull, manager for MBUX Testing and Validation in Long Beach, Calif. And the front-seat passenger has an infotainment system all their own, complemented by Bluetooth wireless headphones. 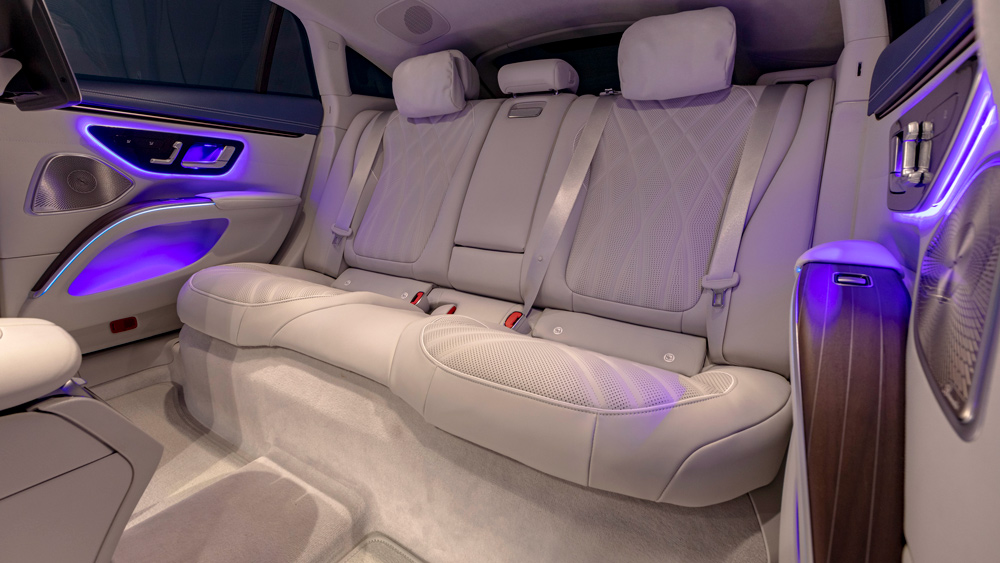 A wellness component improves the ambiance with features like mood lighting and massage, while a HEPA filtration system keeps the cabin air clean.  Photo: Courtesy of Mercedes-Benz AG.

The Hyperscreen also makes sure that those behind the wheel keep their attention on the road when in motion. “A camera in the driver’s display will monitor your eyes and see if you are distracted or not,” says Aull. “If you are looking too often at the passenger side, you get a warning, and after a second time, the display will shut off.” But piloting the EQS should be entertaining enough, and it’s made even easier with rear-axle steering designed to provide nimbler handling than expected from a vehicle with a 126.4-inch wheelbase. On top of that, all the driver assists found on the S-Class are also on board. 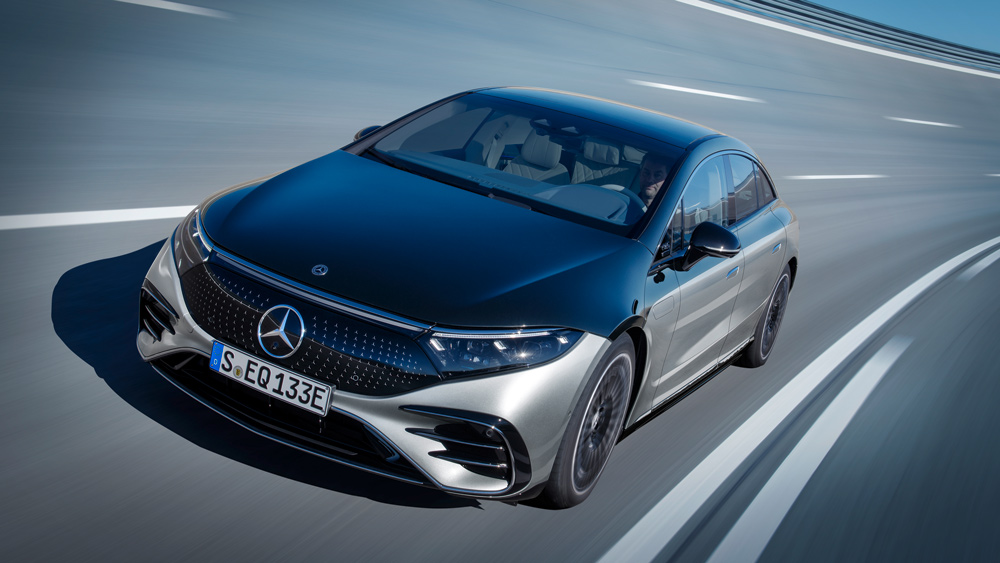 The lithium-ion battery configuration can be recharged to 80 percent in 35 minutes with a DC fast-charging station.  Photo: Courtesy of Mercedes-Benz AG.

Reaching Stateside dealerships this fall, though pricing has yet to be announced, the EQS is the first phase of the marque’s objective to have all of its production passenger models carbon-neutral by 2039, and greater than half of its sales coming from electric cars—including hybrids—by 2030. That possibility looks brighter now, at least judging by the three-pointed star’s newest luminary.