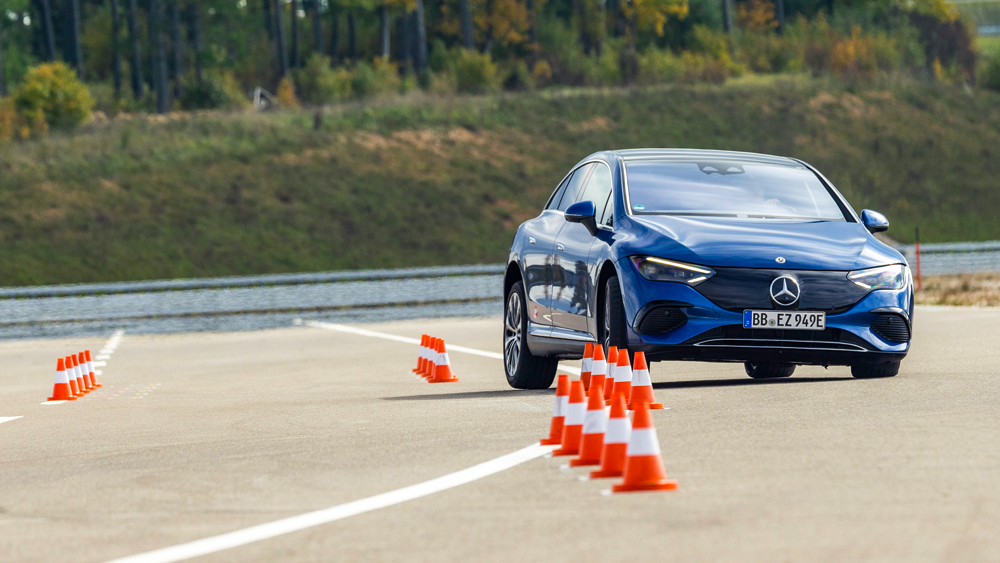 In the south of Germany, just over the border from the microstate of Liechtenstein, you’ll find a very different sort of mini-municipality. In fact, within the high walls of Mercedes-Benz’s 1,300-acre Immendingen test facility are signs from over 10 different nations. International road markings, too, even disparate types of asphalt that represent roads ranging from those found in South Korea to the United States, evidence that cars developed here are set for deployment all around the globe.

It’s here that Mercedes-Benz engineers also build upon decades of work in safety research, knowledge that continues to be deployed on the brand’s growing portfolio of electric cars, like the recently unveiled EQE SUV. EVs are fundamentally the same as other cars in that they must carry passengers and protect them in collisions. However, the high-voltage systems that drive EVs, plus the battery packs that power them, require some special treatment.

Mercedes breaks its safety systems down to cover four phases of an accident. The first is assistance while driving, the various sorts of active safety systems that help drivers avoid collisions. At Immendingen, I was taken on a series of high-tech carnival rides demonstrating everything from what happens when a motorcycle swerves in front of an EQS (the car stopped immediately and automatically) to what happens when an EQE tries to brake hard with only its left wheels on an icy surface (the car automatically counter-steers and comes to a safe, genteel stop).

That’s all standard fare in the luxury segment, but things get a lot more interesting in the next phase, which Mercedes-Benz calls “Pre-Safe.” Here, when the car has determined you’re about to have a collision, it begins to morph into a super-safe bubble of protection. The most immediately noticeable of these changes is what’s called “pink noise,” basically a high-pitched hiss that blasts through the speakers. Unnerving and unpleasant, the sound elicits a constriction in the inner ear to protect the hearing from the potentially explosive sound of firing airbags to come.

The seatbelts also pre-tension, tugging occupants into their seats. And if the car’s radar systems detect that a side impact is inevitable, charges fire to inflate small airbags built into the outer bolsters of the front seats. These bags, currently a Mercedes exclusive, push the front passengers inward by just an inch or so, creating crucial extra space between their bodies and the oncoming collision.

Then there’s the third phase, the collision itself. In the case of a crash, a serious one, numerous airbags are deployed. They’re scattered throughout the cabin on the EQE and EQS, including within the rear seatbelts (to better spread the forces across the occupants’ chests) and even spring out from the inner bolster on the driver’s seat, creating a curtain between the two front occupants.

But still, none of that is distinct to Mercedes EVs. It’s in the after-crash phase that the special treatment begins. Within five seconds of an airbag going off, the EV automatically disconnects its high-voltage system. A low-voltage circuit stays enabled to power things like the displays as well as the car’s communication systems, which remain engaged to allow the calling of emergency-response numbers like 911.

Yet EVs also have a high-voltage setup that delivers the juice between the batteries, the motors and all the other control components in between. This electricity is run through bright orange cables, lines wrapped in Kevlar and carbon fiber before being routed through reinforced sections of the car. This makes them extremely hard to damage but, should one of those lines be severed, it could present a shock risk to a first responder or even a passenger.

This is why that high-voltage system is immediately and automatically disabled. At that point, there are no more worries about electrocution, but there’s still the structural integrity of the battery itself. To protect the cells, Mercedes-Benz wraps the floor-mounted battery packs in the EQS and EQE in a honeycomb of extruded aluminum, providing maximum resiliency to side impacts. The front of the car also has extra reinforcement, making up for the void where a big, heavy engine block would normally be.

All these systems, passive and active, build up on Mercedes-Benz’s decades of active safety experience and ever-smarter collision-avoidance algorithms. The result? EVs leading the charge to be among the safest on the planet.