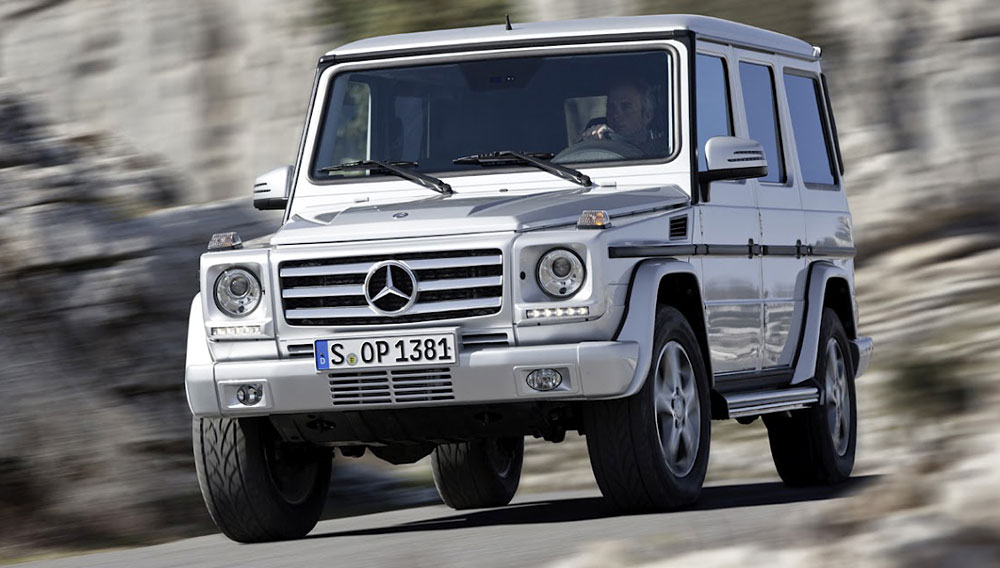 It’s no great stretch to consider the Mercedes-Benz G-Class the Clint Eastwood of the automotive world. It’s famously tough, capable, and blessed with angular good looks that defy the passage of time. And like Eastwood, the venerable Geländewagen has seen a good many model years come and go. The off-roader debuted with military intent way back in 1979, and though its demise has been predicted more than once in the decades since, Mercedes (and the G-wagen’s steady procession of buyers) continue to prove the pessimists wrong.

The G-Class enters its 34th year of production with a host of meaningful revisions inside and out. European buyers can choose one of five variations, including the diesel-powered G350 BlueTec, the short-wheelbase G500 cabriolet, and the range-topping new G65 AMG, which packs a twin-turbo 6.0-liter V-12 with a staggering 612 hp. American buyers get the G550 and the fearsome G63 AMG. The former features Mercedes’ normally aspirated 5.5-liter V-8. It’s matched to a 7-speed automatic transmission and is good for a stout 388 hp and 391 ft lbs of torque. The AMG model employs a twin-turbo 5.5-liter V-8 with 544 hp and 560 ft lbs of torque.

Exterior updates for 2013 are limited to LED daytime running lights and new mirrors, but the interior enjoys a significant (and much-needed) update. The gauge cluster now includes a vivid TFT color display between two round dials, and a tablet-style display for the standard COMAND infotainment system dominates the center console, merging navigation, entertainment, and connectivity functions.

Fans of the G-Class will be pleased to note that the 2013 G-Class gives up none of its all-conquering off-road capability. Power still reaches the wheels via solid axles and a full-time four-wheel-drive system with electronically controlled locking front, center, and rear differentials.

The 2013 G550 and G63 AMG reach North American Mercedes-Benz showrooms this August. The company hasn’t released pricing yet, but expect a confident bump from the current base figure of $107,100. Those ready to opt up to the G63 AMG should budget an additional $25,000 or so. (www.mbusa.com)