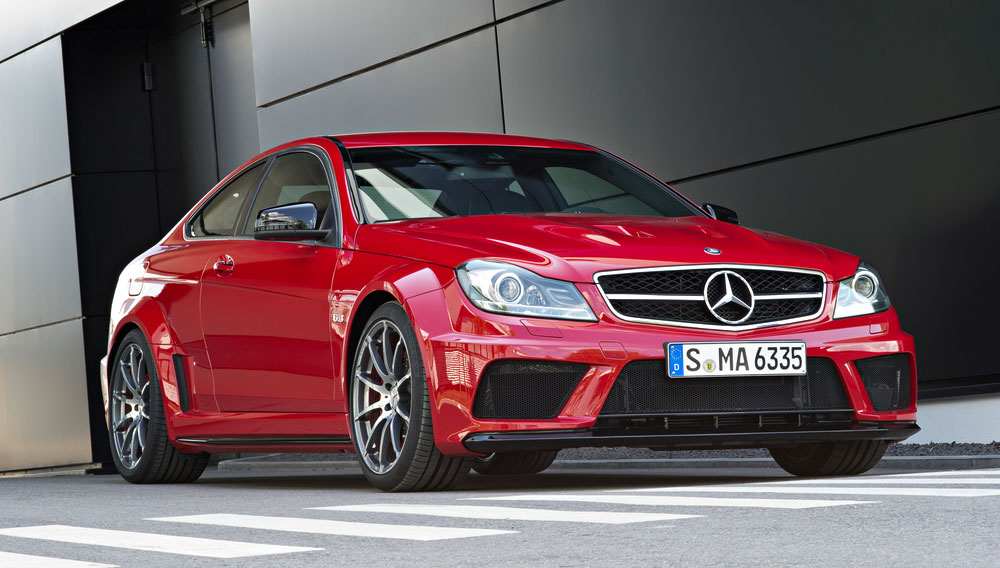 The new Mercedes-Benz C-Class coupe is hardly short on looks, and thanks to the wizards at the company’s in-house speed shop, AMG, it’s no slouch in the performance department, either. On the capable heels of the fearsome C63 AMG coupe—which faces off this year against the Audi S5, the BMW M3, and the Cadillac CTS-V coupe—comes the menacing C63 AMG Coupe Black Series, the most powerful C-Class model ever.

Unmistakable in appearance, the Black Series coupe boasts gaping front air intakes and dramatically flared wheel openings filled by supremely lightweight 19-inch forged aluminum wheels and fat performance tires. And like the exterior, the interior, trimmed in black with red accents, is all business. The rear bench seat has been deleted in the interest of saving precious pounds, though it can be added back in to accommodate small children.

Of course, the star attraction lurks beneath the Black coupe’s louvered aluminum hood: an amped-up version of the standard C63’s 451 hp 6.2-liter V-8 (the engine displaces 6,208 cubic centimeters, despite a passel of “6.3” badges). Driving the rear wheels through the AMG SpeedShift MCT 7-speed manumatic transmission (which in its sportiest driving mode is capable of lightning-quick, one-tenth-second gearchanges), the engine belts out 510 hp and 457 ft lbs of torque. Mercedes claims the sprint from zero to 60 mph will require 4.2 seconds, but that figure seems decidedly conservative; 3.8 seconds seem a bit more accurate.

But like the four Black Series models that precede it, the C63 AMG Coupe Black Series is about much more than sledgehammer power. The car’s development was informed both by Mercedes’ refined road cars and by the company’s motorsports efforts, and as such, it is a track-worthy— but road-ready— masterpiece. Adjustable coil-over dampers at all four wheels provide racer-like road-holding, and an overqualified two-piece braking system with ventilated and perforated discs provides dramatic stopping power. And for drivers with checkered-flag ambitions, the optional Aerodynamics package features carbon fiber winglets on the front valance and an adjustable carbon fiber rear spoiler to control airflow and augment downforce at high speeds, and the Track package includes ultra-high-performance tires and an active cooling system for the rear axle.

The C63 AMG Coupe Black Series will begin reaching Mercedes-Benz dealers early next year in very limited numbers. Pricing is uncertain at this writing, but Mercedes suggests the Black Series coupe will command a healthy 35 percent more than the $62,305— or about $85,000. (mbusa.com)