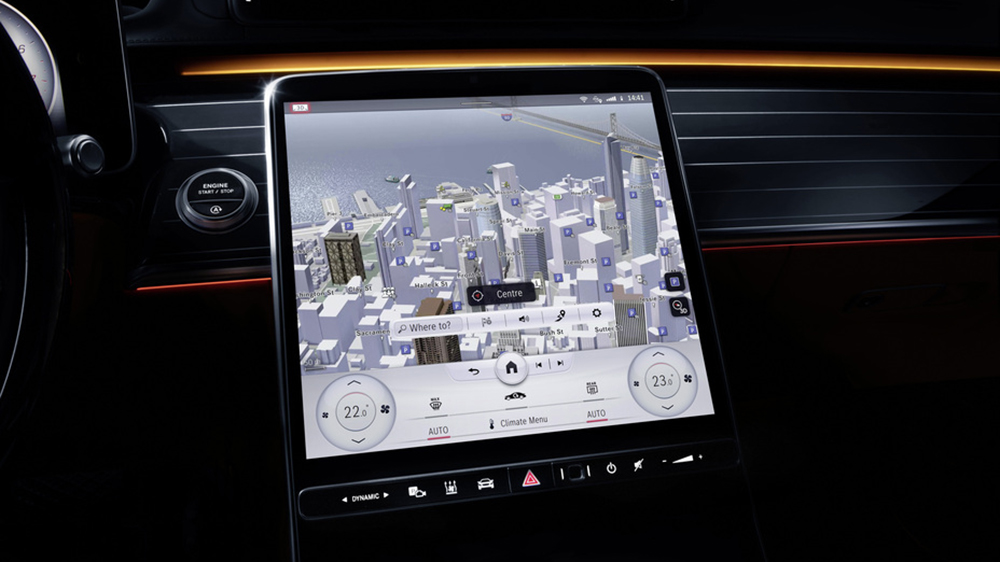 Mercedes-Benz isn’t ready to unveil the new S-Class just yet, but that hasn’t stopped it from dishing out some tasty morsels of information about the exciting new features of its flagship over the last double of months. And while we’re still waiting to see how elegant it will look and how opulent the interior will be, the company has now offered up an in-depth look at the vehicle’s futuristic infotainment system.

On Wednesday, the German automaker unveiled the next-generation of its MBUX infotainment system that will come with the 2021 S-Class, and it’s hard not to view it as a giant leap forward for the company. While physically streamlined compared to past versions, the new system will feature five high-definition screens, augmented reality capabilities and biometric security features.

Any discussion of the S-Class’s infotainment system has to begin with this treasure trove of screens. It’s not strange to see two or even three screens in a luxury car, but customers will be able to outfit their vehicles with as many as five, according to a press release. The most prominent of these is the giant 12.8-inch OLED central infotainment display with haptic feedback. It’s been lowered from the dashboard to the central stack and the driver will be able to use it to select entertainment options, track their journey and adjust climate controls, which are now conveniently fixed at the bottom of the screen.

Tucked behind the steering wheel is the digital instrument cluster which utilizes special pixels and stereo cameras to create a 3-D stereoscopic effect for the driver. It also features augmented reality features that will make navigation easier. In the back, there will be as many as three displays. Two will be located on the back of the front seat headrests, and each will feature a fully loaded version of the MBUX for passengers.

The infotainment system makes extensive use of swipes, gestures and voice commands, which has allowed the engineers to get rid of 27 different physical buttons and nobs. The tablet-like layout has been drastically improved so that each screen displays more info and require fewer swipes to navigate. Processing power has been boosted by 50 percent, which should reduce any of the lag found on older systems. The voice assistant has also been given a robust feature upgrade and can now be used by the passengers in the rear of the car as well.

Additionally, the system now features a number of biometric security features. Designed primarily to protect the driver’s Mercedes Me app store account, the center infotainment system includes a fingerprint scanner and has two cameras that it will use for facial recognition. These two new features, along with the driver’s PIN, ensure that no one buys any new apps or features the driver doesn’t want.