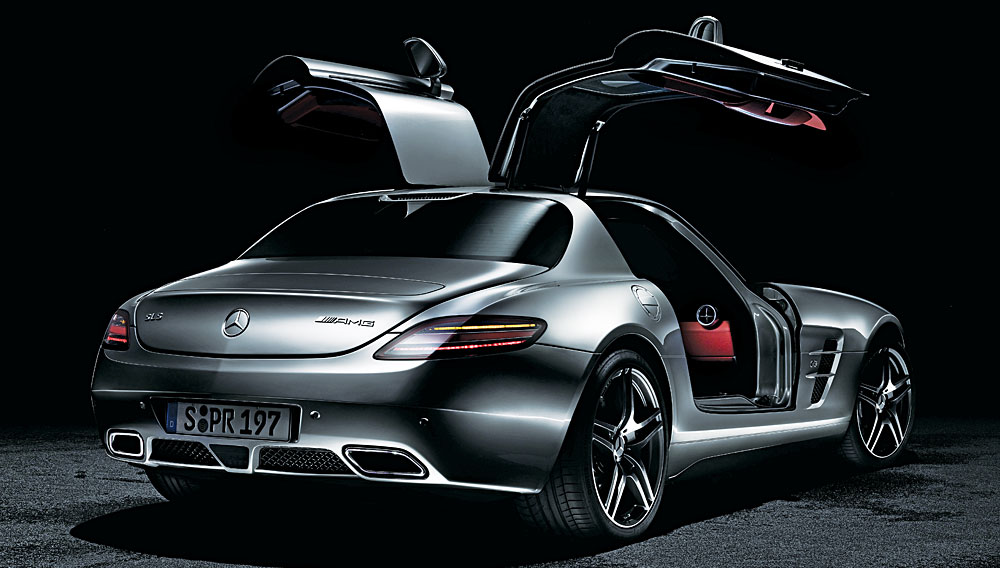 When asked to list the world’s most desirable sports cars, most auto enthusiasts will quickly recite a handful of European marques whose various crests are adorned with equines, bovines, and avian appendages. Few would have imagined that Mercedes-Benz, the Stuttgart stalwart known for its capable Autobahn cruisers, would shake the car world in 2010 with its newest sports-car offering, which, after half a century, revives the trademark gullwing doors that were a signature design feature of the most significant automobile in the company’s history.

That the Mercedes-Benz SLS AMG tops the list of Best of the Best sports cars should come as no surprise to Robb Report readers—nor to the fortunate few who have already driven the SLS—after its selection as the 2010 Robb Report Car of the Year. Silver Star enthusiasts in the know have eagerly anticipated this vehicle, and we expect that it will win many new converts to the marque—provided, of course, that these converts are privileged enough to acquire one of the examples included in the SLS’ limited production run.

The SLS AMG is a wonderful car to drive and is amply endowed not only with power but also with exceptional braking, steering, and suspension. The engine, a 6.2-liter naturally aspirated V-8, produces 563 hp and 479 ft lbs of torque. The 7-speed automated manual transmission is sublime and should be required shifting for other manufacturers. The SLS interior is sensibly luxurious, and after one acclimates to the gullwing doors—and what could become a tedious ingress/egress routine once the novelty wears off—one settles easily into serious driving.

Sitting behind the wheel and gazing over the expansive hood, one realizes just how big this automobile actually is—especially in comparison with benchmark sports cars like the Porsche 911 (997) or pocket rockets like the Lotus. Yet despite its formidable dimensions, the SLS handles as nimbly as smaller cars in curves and at speed.

Exotic looks and retro references aside, the new SLS AMG is a gimmick-free $200,000 supercar that acquits itself nicely as a no-nonsense, real-world daily driver. Unlike its costlier McLaren-built AMG predecessors, which overpromised and underdelivered, the 2010 SLS AMG represents true excellence wrapped in a rational, retro, reasonably priced package.