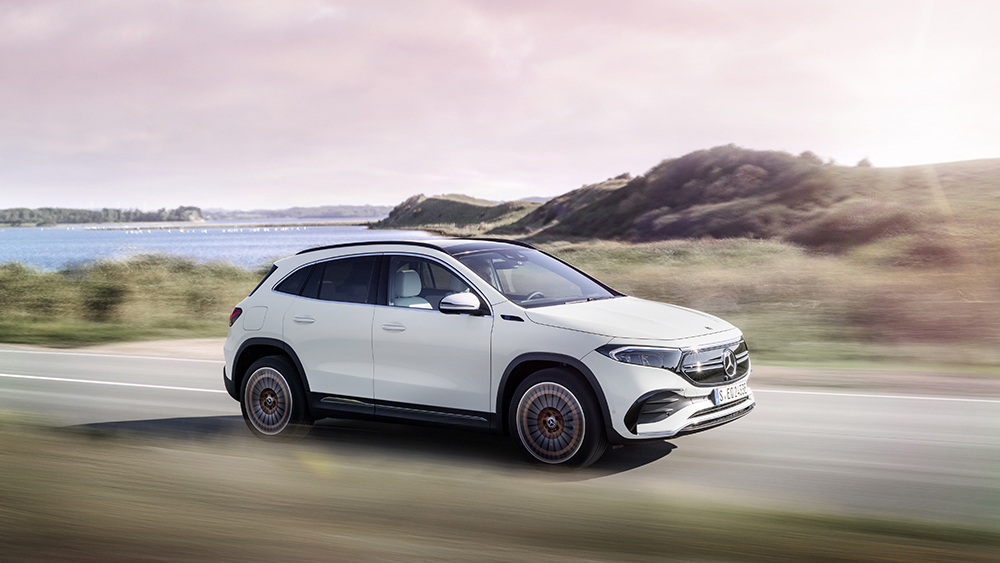 Mercedes-Benz has just added an electrifying new member to its burgeoning EV family. The EQA is a compact crossover that will offer just over 300 miles of range and a rapid half-hour charging time.

The svelte four-wheeler follows in the footsteps of the EQC, the marque’s first production EV that was unveiled in 2019. The battery-powered duo are part of a new lineup of 10 EQ-badged electric vehicles that the marque spent $11 billion developing and plans to roll out across the next two years.

Whereas its predecessor was billed as a luxury compact SUV with a starting price of $67,900, the new EQA will be marketed as an entry-level model and will only set you back $48,442 (€39,950). It’s slated to go into production this year in Europe but is still being considered for the US market.

“We will hopefully have more to share in the next few months,” a spokesperson for Mercedes-Benz USA told Robb Report.

The EQA offers a remarkable range of 302 miles.  Mercedes-Benz AG

The EQA is based on the ever-popular, combustion-powered GLA and shares similar characteristics. But it is, dare we say it, a little more refined. The SUV eschews unnecessary clutter in favor of a clean, aerodynamic silhouette with a sweeping front end. Mercedes says this gives the car a low drag coefficient of 0.28 for less wind resistance and thus higher efficiency in terms of range.

Speaking of range, the EQA’s 66.5-kWh battery pack will reportedly offer a more-than-respectable range of 302 miles (486 km). It’s not the 400 miles that Tesla’s new Model S promises, but above average nonetheless. What’s more, with rapid DC charging, the car can be recharged in just 30 minutes. (Re-juicing via a wall box or public AC charging will take 5 hrs and 45 minutes.)

When it comes to grunt, the EQA will be equipped with a single-motor electric powertrain that offers 187 hp and 277 ft lbs of torque. According to Mercedes, this will give the EV a top speed of 100 mph and allow it to climb from 0 to 60 mph in 8.9 seconds (roughly 2 seconds longer than the GLA).

Thanks to rapid DC charging, the EV can recharge in just 30 minutes.  Mercedes-Benz AG

The automaker is also planning to launch additional variants of the crossover, including a dual-motor range-topper with 268 hp and a high-range model that could cover 310 miles on a single charge.

Naturally, the EQA features futuristic aesthetics that place it firmly in the 21st century. It will come standard with the marque’s completely digital (and voice-controlled) MBUX infotainment system and drivers can choose between two 7-inch displays or a widescreen variant with two 10.25-inch displays. It also features ambient lighting with 64 different colors, a parking camera and a luxe leather interior. Two different design packages will let you personalize the EQA even further.

Check out more photos of the EQA below: