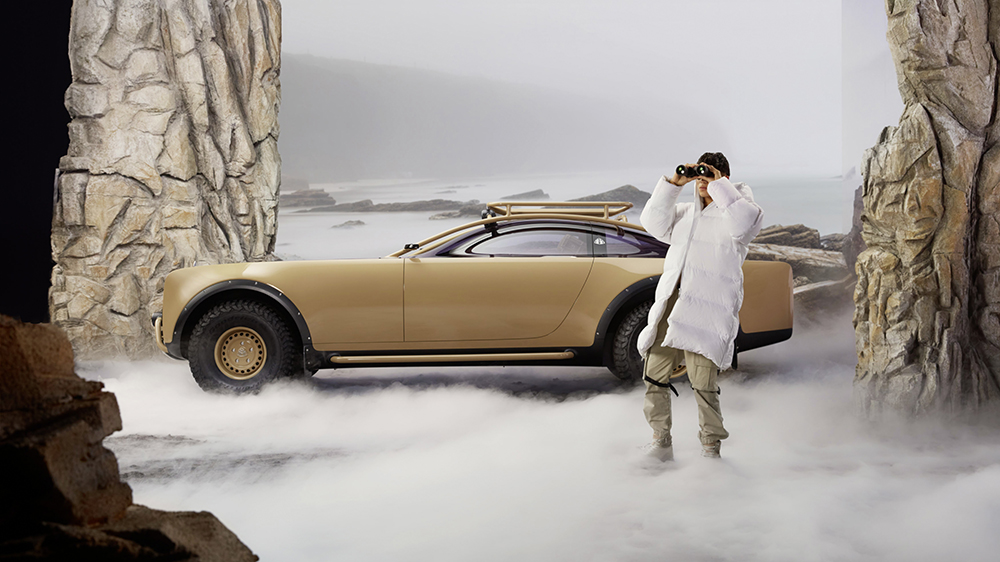 The German automaker unveiled Project Maybach, a zero-emission show car dreamt up by Abloh, at Art Basel Miami Beach on Wednesday, just days after the creative director’s death at the age of 41 following a private battle with cancer. The striking vehicle—his second collaboration with the brand, following the G-Wagen race car—is a battery-powered two-seater designed to tackle the great outdoors.

First announced in October, Project Maybach is a true concept vehicle unlikely to ever go into production. That doesn’t make it any less intriguing, though. Abloh worked with Mercedes design boss Gorden Wagener on the futuristic grand tourer, which nods to the automaker’s storied history.

The gold and gloss black coupé spans nearly 20 feet from front to back. Much of that impressive length comes courtesy of a gargantuan nose lined with integrated solar cells. As you would expect, Maybach’s trademark barred grille headlines the front, alongside an array of safari-style lights. Moving back, a sloped and transparent roof line blends into a rear end that looks like the back of a spaceship. Atop the car is a roof rack fitted with similar lights to those on the front fascia. It’s a curious amalgamation of luxury sedan and off-road vehicle that works surprisingly well.

Abloh’s influence can also be felt inside the car. Done up almost entirely in tan leather, matching the exterior, the spartan setup look more like the bridge of the Starship Enterprise than the cabin of a car. Abloh and Wagener may have gone for a minimalist approach, but they still found room for a cinematic infotainment screen situated in the center of the dashboard. From the pictures, it appears the screen might fold back into the dash when not in use.

Inside the Project Maybach  Mercedes-Benz

Project Maybach was always supposed to debut this week, but at Abloh’s family behest the vehicle will now be exhibited for more people than initially planned. Originally, the car was set to be unveiled during an intimate press gathering, but it will now be displayed to the public at the Rubell Museum until Thursday evening.

“Mercedes-Benz is devastated to hear of the passing of Virgil Abloh,” the marque said in a statement on Wednesday. “Our sincere thoughts are with Virgil’s family and teams. Now opening the world of our collaboration, and Virgil’s unique vision, to the public, we want to respectfully celebrate the work of a truly unique design talent, who created endless possibilities for collaboration through his unbridled imagination and inspired all that knew his work.”

The Project Maybach unveiling is just one of what are sure to be many tributes to Abloh during Art Basel Miami. On Tuesday, Louis Vuitton dedicated its Spring Summer 2022 show to his life and legacy. Abloh had worked at the fashion house since 2018, when he became the first Black artistic director of a major French luxury label.

Check out more photos of the Project Maybach below: