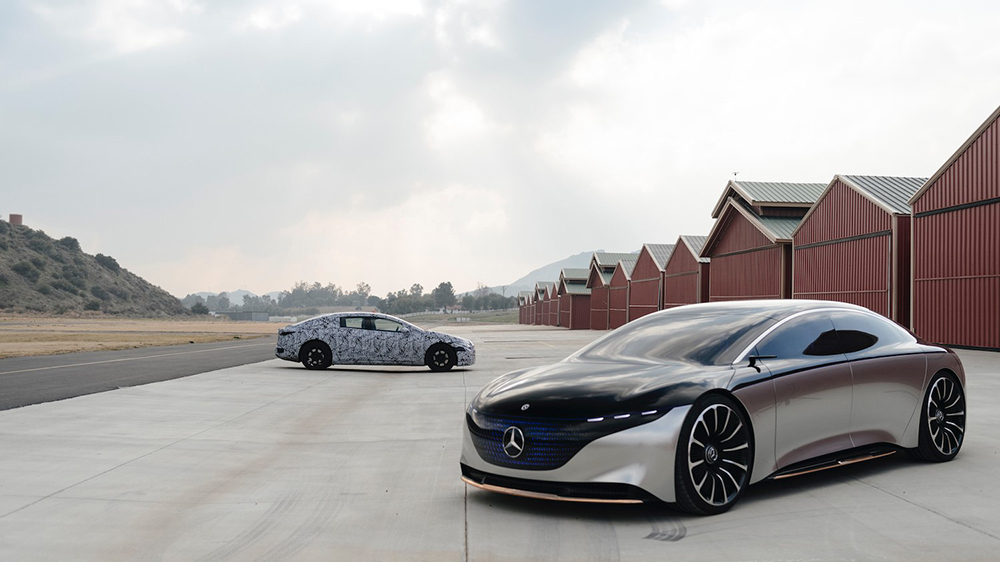 Sure, it’s rare to see high-minded concept cars go into production. Even more shocking? When a production model actually resembles the concept that grabbed our attention in the first place. Now it looks like Mercedes-Benz is ready change that.

Earlier this week, the German automaker provided the press with a first glimpse at the upcoming production version of the Vision EQS concept during testing in California. While the prototype was covered in heavy camouflage, enough of the vehicle was visible to reveal that the final version will likely take more than a few style cues from the fully electric saloon that wowed audiences at last year’s Frankfurt Motor Show.

While the camouflage makes it difficult to picture the production EQS in detail, its elongated silhouette is very similar to that of the original concept. The wide-set Vision EQS had a futuristic, curvilinear shape that is unlikely to make it untouched to production, but it’s clear the two vehicles share a core set of flowing lines and accents, as seen in the newer car’s headlights. The doors were kept shut for the photoshoot, so it’s impossible to know whether the production EQS will come close to replicating the concept’s luxe yacht-inspired interior, but one can dream. One thing we do know, though, is that the car will feature the latest version of the MBUX infotainment system.

The production EQS will be part of the next generation S-Class lineup, reports CNET. And unlike the EQA, EQB and EQC models, it will be built on a dedicated electric-car platform. Mercedes-Benz has yet to reveal details about the EV’s powertrain, but the concept’s two electric motors were capable of producing an impressive 470 horsepower and 560 lb-ft of torque, pushing the car from 0-to-60 mph in just 4.5 seconds.

Most impressive of all, though, may be the Vision EQS’s 470-mile range. While it seems unlikely that the production version will be able to match that figure, anything close would almost certainly make it the longest-range EV on the road.

The standard S-Class lineup is expected to debut before the end of 2020, with the production EQS following shortly thereafter. Mercedes-Benz has yet to reveal pricing details, but with the car expected to be the brand’s new electric flagship, it will likely be the most expensive car in the refreshed line.