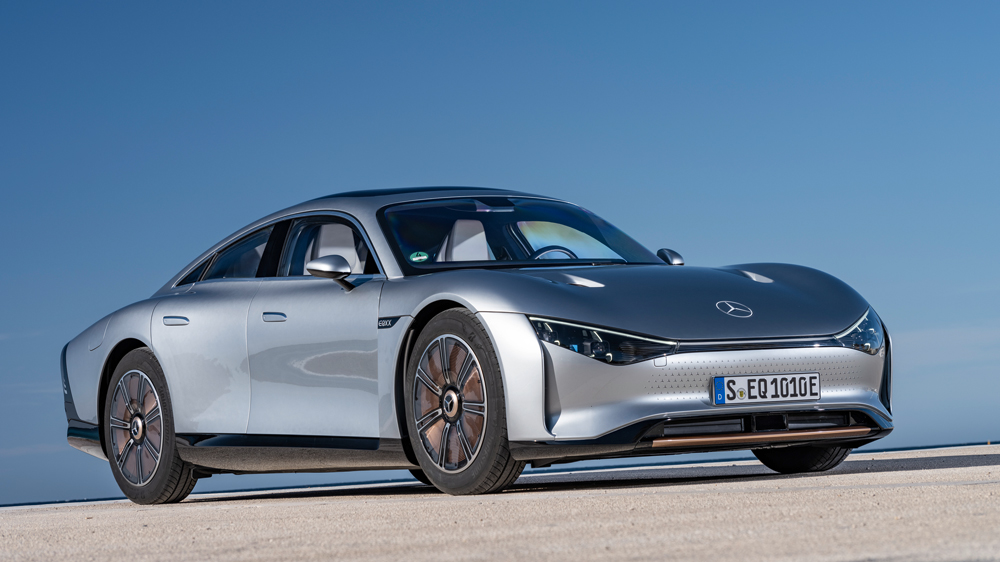 Mercedes-Benz is throwing down the gauntlet with the Vision EQXX, an electric concept car that showcases incredible advancements in aerodynamics and efficiency—all wrapped in a sleek, alluring package. While the current production EQS and EQE are the first of Mercedes’ electric offerings, the EQXX forgoes soft, jellybean shapes for taut, sculpted volumes and a tech-savvy cabin that previews what the next generation of EVs will bring.

“Whatever we do is linked to our design philosophy—sensual purity—and is always in a strategy,” said Steffen Köhl, Mercedes-Benz’s director of advanced exterior design, when Robb Report recently visited the company’s advanced design studio near Nice, France. “Even a research car like this is always not a one-off, it’s not an accident.”

While efficiency was the driving force behind the EQXX, designers also wanted the car to be desirable. Key design elements that contribute to the car’s range include a sleek, boattail silhouette that tapers in the back, covered wheels that reduce turbulence and a movable rear diffuser that extends nearly 8 inches at higher speeds—a distinctive element that is not only functional, but adds volume and presence. According to Köhl, “As designers, we love movable parts, to work with something that makes a car alive in a way.”

The car features a sleek, boattail silhouette that tapers in the back.  Photo: Courtesy of Mercedes-Benz AG.

Concept cars are rarely suited to real-world driving, but the EQXX proves it’s more than an exercise in design. Its next-generation power train will propel future models of Mercedes-Benz electric vehicles. A relatively compact, densely powerful battery pack, in combination with advanced cooling technologies, energy-saving components and a mind-blowing drag coefficient of just 0.17 helped the EQXX traverse more than 1,000 km (about 625 miles) on one charge from the company’s headquarters in Stuttgart, Germany, to Cassis in the South of France. While test drivers limited speeds to about 87 mph on the Autobahn, and kept the AC off to help with range, the journey served up plenty of challenges for an electric power train, from snow and rain to a steep mountain pass through the Alps.

“Anyone can put in a huge battery and go a long way. We wanted to not only achieve 1,000 km [on one charge], but with the smallest battery possible,” says Eva Greiner, chief engineer of the electric drive system. The electric drive unit in the EQXX Was developed in-house by Greiner’s team, and the battery pack, which weighs about 1,100 pounds, is able to send about 95 percent of its energy directly to the wheels. By comparison, most manufacturer’s batteries achieve about 90 percent. A solar panel on the roof powers the auxiliary functions, including the interior screens and infotainment system.

The EQXX has a drag coefficient of just 0.17.  Photo: Courtesy of Mercedes-Benz AG.

In the cabin, the EQXX pushes boundaries for new and sustainable materials. The butter-soft upholstery is made from lab-farmed mushroom mycelium, formed into sheets that resemble raw leather, then dyed and processed. Fabric inserts are made from nopal cactus from the deserts of Mexico, which need very little water. “These have a very strong potential to replace petroleum-based leather alternatives,” says Belinda Gunther, head of color and materials design. Synthetic-silk cording is every bit as soft as the real thing, while translucent, three-dimensional studded door inserts are reminiscent of a futuristic Valentino pump.

The display screens in the EQXX are a sweeping horizontal presentation, which spans the entire width of the cabin using a single piece of glass. While most other screens are continuously backlit, these have 3,000 micro-LEDs that can be dimmed individually, turning off sections of the screen not in use to further save energy.

The graphics displayed render real time thanks to the same technology used in video games (other car companies are using this technology more and more, including GM in the new Hummer EV). And instead of placing speakers around the cabin, the EQXX has small speakers in the headrest of the front seats and a subwoofer embedded in the seat-back cushion. This not only saves energy by playing sound closer and directly to the listener’s ears, it also allows both occupants to listen to different audio content simultaneously.

Upholstery is made from lab-farmed mushroom mycelium that’s formed into sheets resembling raw leather and then dyed and processed.  Photo: Courtesy of Mercedes-Benz AG.

While Mercedes-Benz won’t say whether a car identical to the EQXX will go into production, the concept continues to serve as a test case, sparking inspiration for designers and engineers as they work together to take electrification to the next level, embracing the occasional issues that arise between the teams. “You will not create when you have harmony with each other,” Köhl says. “We love these conflicts between our designers and engineers because at the end, we get the best car.”