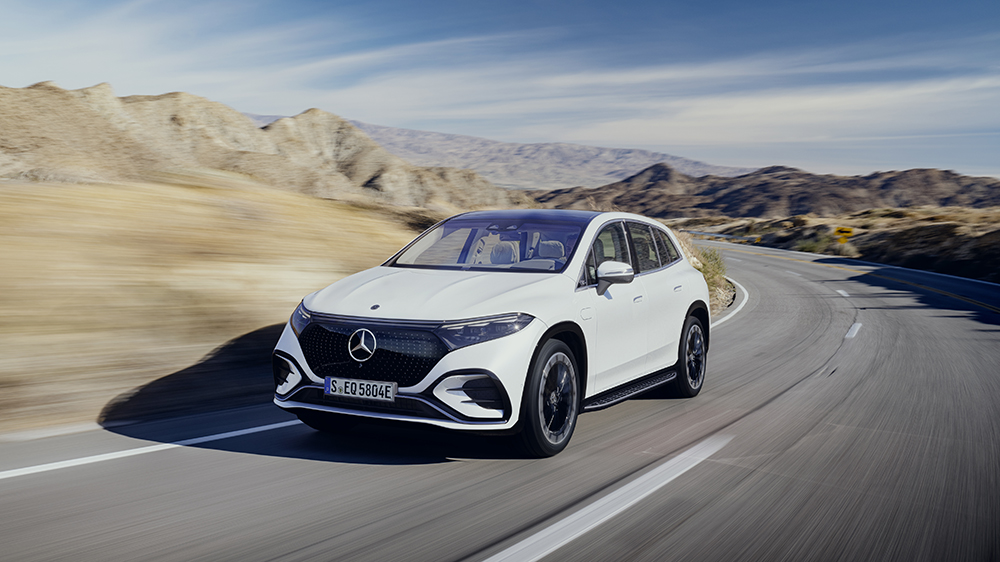 Can’t get enough of the Mercedes-Benz EQS? Well, now you have a new version to choose from.

The German automaker unveiled the latest addition to its growing lineup of all-electric models on Tuesday, the EQS SUV. The third version of the company’s battery-powered flagship—following the original EQS sedan and AMG EQS—is the biggest yet, offering up to three rows of seating.

Although it is clearly an SUV, the latest EQS looks more like the sedan it’s based on than the marque’s popular GLS or G-Wagen models. The new version has the same front fascia as its predecessors, along with a number of other styling cues, like its aerodynamic lines and LED lights. From the side, though, the differences are readily apparent. The roof of the SUV stands at 68 inches tall, which is 8.5 inches higher than that of the sedan, and it extends all the way to a rear hatch. We’re sure some Mercedes enthusiasts will wish it were a tad boxier, but the curvaceous shape will better allow it to cut through the air, something the marque has made a priority with all its EVs.

The differences between the versions becomes even clearer inside. As with the exterior, things are the same up front, including the option to upgrade to the dashboard-spanning, touch-controlled Hyperscreen, which integrates three displays—a 12.3-inch gauge cluster, a 17.7-inch touchscreen and a 12.3-inch passenger screen. The Hyperscreen runs the latest version of the MBUX infotainment system, which can handle seven unique user profiles. It also has an embedded navigation system and is compatible with Apple CarPlay and Android Auto.

In the back, the EQS SUV starts to feel like a completely new vehicle. A second row of seats, with room for three adults (five total), comes standard, but you can opt for a third row to boost seating to seven. The rear seats can be folded down for added cargo room. The five-seat model has up to 74 cubic feet of cargo space when the second row is folded down, while the seven-seat version has up to 71 cubic feet of space when the third row is out of the way. A panoramic sunroof also comes standard.

Inside the EQS SUV  Mercedes-Benz

The EQS SUV will debut in two trim levels, the rear-wheel-drive EQS450+ and the all-wheel-drive EQS 580 4MATIC, according to the brand. The first trim has a single-motor powertrain capable of generating 355 hp and 419 ft lbs of torque. The 580 4MATIC, meanwhile, sports two motors, one on each axle, and produces 536 hp and 633 ft lbs of torque. That’s 20 more horses than the top-of-the-line sedan but 113 less than the high-performance AMG EQS580 4MATIC (and 215 less if you add the AMG Dynamic Plus package). That’s plenty of oomph, especially for an everyday driver.

No range figure has been announced, but both the sedan and SUV come equipped with a battery with 107.8-kWh of usable storage. The entry-level sedan can travel 350 miles on a single charge­—which is very solid performance, even if it didn’t meet Mercedes’s target—so SUV, which is bigger and heavier, will likely come in below that. With a 9.6-kW onboard charger and the ability to accept up to 200-kW DC charging, you should be able to fill the battery from 10 to 80 percent capacity in about a half hour.

The EQS SUV will debut as part of Mercedes-Benz’s upcoming 2023 model year lineup. No pricing has been announced, but the sedan starts at $102,310 for the EQS 450+ and $119,110 for the EQS 580 4MATIC. We expect the SUV will likely start north of those figures, while staying in the same general range.

Check out more photos of the EQS SUV below: