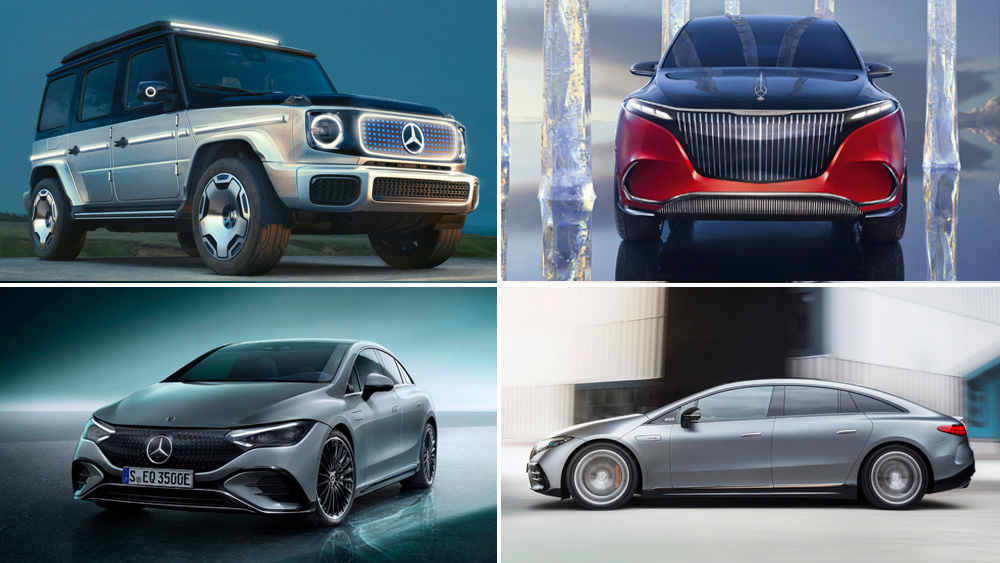 Remember returning to school from summer vacation, when your entire class was asked to share how they spent the break? Well, that’s what the 2021 IAA Mobility show is to the transportation and tech industries: a giant show-and-tell focused on what everyone has been up to—in this case, since the start of the pandemic. Cancelled last year like most everything else, the usually annual event is once again welcoming the public from September 7 through 12 in Munich, the first time the city has played host to the German expo which is traditionally held in Frankfurt.

More than 700 exhibitors, from OEMs to mobility specialists to technology partners, have been champing at the bit to get their respective stories out. Among the major players with a lot to say this year is Mercedes-Benz, which showcased a slew of recent releases, including global debuts of new production models and concepts.

A portion of the Mercedes-Benz exhibit space at the 2021 IAA Mobility show.  Photo by Viju Mathew.

At a preview reception attended by Robb Report, Ola Källenius, chairman of the board of management for Daimler AG and Mercedes-Benz AG, said “This feels like a fresh start in many ways. We are reinventing IAA in a new city and renewing the promise of our industry—driving the transformation toward more sustainable mobility, right now.” The German marque’s embrace of the paradigm shift to zero emissions is apparent in the new, electrified models which nonetheless remain anchored in the automaker’s legacy of refinement and performance.

The new EQE represents the electrification of the E-Class, among the most popular model lines from Mercedes.  Photo: Courtesy of Mercedes-Benz AG.

Mercedes may have waited to jump on the production EV bandwagon, but it’s certainly grabbed the reigns after recently introducing the EQS, a battery-powered version of its flagship S-Class sedan. As highly anticipated as that model was, the new executive four-door making its grand entrance at IAA may have more market impact. The EQE represents the electrification of the E-Class, one of the most popular model lines from Mercedes, and offers much of the innovation found in the EQS but in a slightly smaller and less baronial package.

The 288 hp EQE 350 carries an electric motor at each axle and, at the rear, an eATS electric drivetrain that monitors torque levels 10,000 times per minute, for optimum management. A 90 kWh battery provides as much as a 410-mile range and is able to recharge by 155 miles in 15 minutes.

The latest MBUX infotainment system can also be operated through the optional MBUX Hyperscreen.  Photo: Courtesy of Mercedes-Benz AG.

Constructed on the same architectural platform as the EQS, the EQE’s wheelbase is 3.5 inches shorter than its sibling, but with a roomier cabin than the standard E-class. Inside, there’s the latest suite of driver assists—including one that monitors your eyelids to detect drowsiness—and the next generation of the MBUX infotainment system, which can be optionally housed in the game-changing MBUX Hyperscreen. The latter is, according to Källenius, “an industry first that allows front-seat passengers all over Europe to watch a movie on their own [12.3-inch OLED] Hyperscreen display while traveling.”

Perhaps equally impressive is the MBUX’s Navigation with Electric Intelligence, a system that calculates the most expedient routes while also monitoring range and distance from available charging stations. Other extras include automatic doors and rear-wheel steering for increased handling precision.

No time was wasted by the AMG division when it came to putting its high-performance stamp on the EQS. The team at Affalterbach seems out to prove that an EV can provide driving dynamics and excitement worthy of the AMG badge.

This EQS variant features the same two-motor setup, with one at both the front and rear axle, though AMG has bolstered output from the base EQS 450+ model’s 329 hp (516 hp for the EQS 580 4Matic+) to 649 hp and 700 ft lbs of torque. And with the AMG Dynamic Plus package in Race Start mode, those figures get a temporary bump to 751 hp and 752 ft lbs of torque. AMG’s version also benefits from the tuners’ Performance 4 Matic+ all-wheel-drive configuration, which constantly analyzes and disperses torque to all four corners, based on drive mode—there are five: Slippery, Comfort, Sport, Sport+ and Individual) and driving conditions.

Piloting the new AMG EQS is made easier with rear-wheel steering and the AMG Ride Control+ suspension with electronically adjusted dampening, all of which come standard. The energy system has also been enhanced, now based on a 400-volt, 107.8 kWh lithium-ion battery that can have its range replenished by 186 miles in just 19 minutes. The power train enables the AMG EQS to reach 62 mph from a standstill in 3.4 seconds and top out at 155 mph.

Recognizing that sound is still synonymous with performance, AMG has gone the controversial rout of fabricating a soundtrack that relies on loudspeakers and subwoofers. (Purists, hold your ears.) The goal, as with that for the entire car, is to provide an experience that’s in keeping with the automaker’s highest-performing models.

“We always base or development on the series versions and are lucky to be just six months behind,” says Philip Schiemer, CEO of Mercedes-AMG and Mercedes-Maybach, regarding the timing of the AMG model after the standard EQS reveal. He tells Robb Report, “We wanted to be very close to [the original EQS] launch because we wanted to show that AMG is entering into the electric segment,” before noting that the AMG EQS will reach the US first, then Europe.

While the storied Maybach name has been associated with automotive exclusivity for the past century, its continued presence within the industry has often been uncertain—at least before it was brought into the Mercedes fold. Yet the moniker now seems affixed to the future, as evidenced by the one-of-a-kind Concept Mercedes-Maybach EQS that premiered at IAA.

“It was a natural approach to go with an electric version of the Maybach,” says Schiemer, adding, “the Maybach customer is looking for silence, freedom and relaxation—electric cars are perfect for that.”

The unique SUV, sitting on 24-inch, five-spoke wheels, presents a fluid aesthetic, like a once-blocky river stone smoothed over time. Presented in a two-tone paint scheme that pairs Obsidian Black Metallic with Zircon Red Metallic, the vehicle is made even more distinctive by chrome pinstripes.

The interior features a floating center console, extending to the two rear captain’s chairs, and another infotainment system at the back.  Photo: Courtesy of Mercedes-Benz AG.

On the other side of the doors, which open automatically at the driver’s approach, the interior is dressed in white and dark blue with rose-gold accents. Prominent features include the MBUX Hyperscreen running the width of the dash and a floating center console that extends to a pair of rear captain’s chairs, plus another infotainment system at the back.

This particular EQS foreshadows an all-electric Mercedes SUV, reported to have a range of around 378 miles and which begins production next year. When asked how similar the concept is to what can be expected at dealerships, Schiemer says, “Oh, we are very close.”

If nothing else, the 2021 IAA answered the question that’s long been top-of-mind for all-terrain enthusiasts: What would Indiana Jones choose as his daily driver today? The four-wheel holy grail was more than hinted at with the global revelation of the Concept EQG, an electric G-Wagen prototype that looks true to the classic vehicle’s spirit of adventure.

The original Geländewagen was developed for army action in the late 1970s but soon conquered the consumer market thanks to its combination of off-road prowess and stalwart style. Now more common in Beverly Hills than the backcountry, the G-Wagen continues to refine its identity while staying true to its roots.

The Concept EQG foreshadows a G-Wagen EV that can still take on tough terrain when needed.  Photo: Courtesy of Mercedes-Benz AG.

“For the next chapter of this everlasting story, we bring the best of two worlds together,” says Schiemer during the unveiling. Without going into specifics, he teases the fact that the futuristic 4×4, which rides on 22-inch aluminum wheels, boasts a ladder-frame body sheltering four electric motors, a new rear axle and a two-speed gearbox, and a flush roof rack trimmed with LED lights for heightened visibility. The Concept EQG, unsurprisingly, has generated the most buzz with show attendees.

These new Mercs are among the first waves in the company’s changing tide. “Next year, we will have battery-electric options in every segment we serve,” Källenius says. “And by 2025, we will have at least one all-electric alternative for every model we make.”