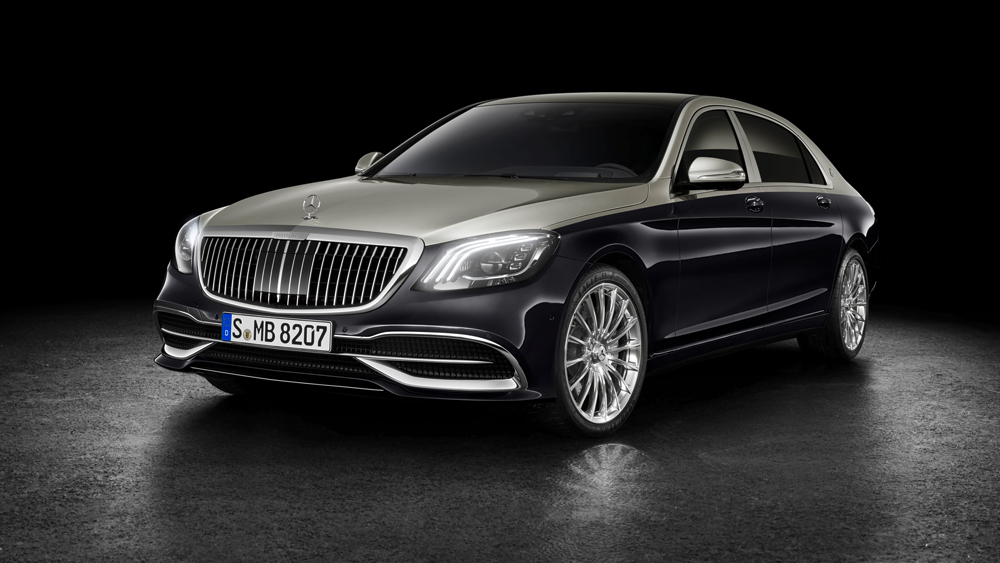 High on a hill above Zurich, Switzerland, mist clings to the steeples of the Dolder Grand, a castle-like hotel built nearly 120 years ago. Extensively remodeled a decade ago, the complex is an unusual marriage of old and new, the restored original edifice now flanked by modern, free-form wings. Offering all the accouterments of a contemporary luxury hotel while maintaining its classical aesthetic, the Dolder Grand stands as a testimony that history and progress are not always incompatible.

In similar fashion, Mercedes-Benz has updated the S-Class with a refreshed design and some of the industry’s most advanced technology, while preserving the legacy of the stalwart sedan. Venerated for its spaciousness, quality, and superb ride, the S-Class sets the standard by which every other luxury sedan is judged.

The current S-Class was recently refreshed with subtle exterior design changes that include an updated front grille and new LED tail lamps that glitter like rubies, while a significantly redesigned interior incorporates wide, digital displays and enhanced passenger comfort.  Beneath the surface, the latest S-Class boasts revised engines and a significantly improved semi-autonomous driving system. In all, 6,500 components have been retooled or replaced.

The Maybach S 560 and S 650 are the longest in the brand’s lineup at almost 18 feet.  Photo: Courtesy of Mercedes-Benz.

“With our flagship, we wanted to make the difference between excellent and the benchmark,” says Hermann Storp, director of development for the S-Class lineup. Introduced in 1972, the Mercedes S-Class became the limousine of choice for presidents, popes, dictators, movie stars, and business tycoons. Over its near-50-year history, the S-Class also became a showcase for new ideas and safety features. For example, it was the first mass-produced car to use a turbocharged diesel engine and the first to include airbags as standard equipment. But the most compelling thing about the S-Class is its stately yet understated elegance, offering excellent road manners and creature comforts without being ostentatious.

Today’s S-Class lineup comprises multiple body styles and power-train options. These include the Mercedes-AMG S 65 with its mighty V-12 that makes 621 hp and 738 ft lbs of torque, as well as the S63 with its updated, turbocharged V-8, whose 621 hp and 664 ft lbs of torque—along with its lighter weight—currently beats its V-12-powered sibling from zero to 60 mph by 0.7 seconds. The most sumptuous of the sedans are the Mercedes-Maybach S 650 and S65, which use the V-12 and V-8, respectively. If the AMGs are the racing yachts of the S-Class lineup, the Maybachs are the luxury cruise liners.

Wilhelm Maybach, a former Daimler technical director, founded his eponymous company in 1909, supplying engines for zeppelins and rail cars. He went on to produce a number of luxurious motorcars between 1920 and 1940, but stopped automotive production during World War II to supply engines for German tanks. Daimler-Benz bought the company in 1960 and put the Maybach brand on a number of hand-built, special-edition cars, but it wasn’t until the late 1990s that Daimler began to put the Maybach name on ultra-luxurious production cars built on the S-Class platform. However, sales and reviews fell short in comparison with its competitors—mainly Rolls Royce and Bentley—and Maybach was discontinued as a standalone brand in 2012.

Since then, Mercedes-Benz has resurrected the name, repositioning it as a top-of-the line trim, with a focus on superior finishes, materials, and comforts that executives and royalty alike would enjoy. While the earlier version of the Maybach S-Class seemed to be more of a badge job, this current generation goes beyond color and trim to offer increased space, enhanced acoustics, and the overall feeling of exclusivity that one would expect from the Maybach name.

Maybachs ride on 20-inch wheels and are adorned with additional chrome brightwork.  Photo: Courtesy of Mercedes-Benz.

On this foggy morning in Zurich, I bid the turrets of the Dolder Grand farewell and drive the Maybach S 560 north into the pastoral countryside, jazz piping through the speakers and the rich smell of leather upholstery filling my nostrils. Mercedes’ bi-turbo V-8 is delightful in all of its applications, but performs appropriately in the S-Class with a stately grace. For efficiency’s sake, the engine can run on four cylinders, one of many power-train improvements that Mercedes engineers say have reduced fuel consumption by about 10 percent. On smaller village roads, the S 560 cruises genteelly in comfort mode past scattered herds of Swiss cows, whose brass bells clang gently as they munch on emerald grass.

At nearly 18 feet in length (and about ten inches longer than the long-wheelbase S-Class), the Maybach S 560 and S 650 are the longest Mercedes vehicles in the brand’s lineup. The 2019 models are visually set apart by a unique front grille with strong vertical lines, a cue borrowed from the Vision Mercedes-Maybach 6 concept car shown two years ago during the Pebble Beach Concours d’Elegance.  Maybachs also ride on 20-inch wheels and are adorned with additional chrome brightwork. A completely redesigned interior employs features first found on the latest-generation E-Class, including dual widescreen displays, whose functions can be controlled by the traditional rotary knob or by small touch pads on the steering wheel. Seats have been reshaped to better fit the body, and are covered with Nappa leather. Mercedes interior designer Frederik Knothe points out the upholstery’s “placed perforations,” meaning the holes in the leather never overlap with the stitching. Maybach models get exclusive color combinations, including Armagnac Brown and Black, which wrap the seats, dash, and, of course, the embossed accent pillows in the rear seat.

Along with interior upgrades come a selection of new, wellness-oriented programs with names such as “vitality” and “comfort,” which synch music, climate control, massage functions, and scent. It’s fun the first couple of times, but the novelty of the endlessly looping Muzak soon wears off and I switch back to my iPhone. The massaging seats, however—some of the best on the market—stay on full blast.

When I’ve had enough puttering about on the slow roads, I set the course for the A4, one of Europe’s autobahns and continue north toward the German border. When that glorious symbol that indicates no speed limit appears, I mash the pedal to the floor and feel those turbochargers spool up while the nine-speed automatic transmission shifts—again and again—through the gears. Despite the Maybach’s gargantuan size, it remains stable and planted. Driving dynamics are noticeably improved from the previous Maybach S-Class, which I drove during Robb Report’s 2015 Car of the Year competition; an experience I likened to piloting the world’s most luxurious school bus. Storp later explains these refinements are due in part to revised suspension damping, as well as changes to the rear-axle and subframe bushings.

As I speed alone toward our meeting point in Tuttlingen, in the southern region of Baden-Württenberg, it strikes me that reviewing the Maybach S 560 from the driver’s seat is about as practical as reviewing a Gulfstream G650 from the cockpit. In this car, the place to be is in back, reclining in plush adjustable seating with cavernous legroom, tinkering about with the folding tray tables and rear display screens. But if you are relegated to chauffeur duty, there are far worse places to be than a Maybach S 560. Especially since all current S-Class models have been updated with improved, semi-autonomous driving features that can accelerate, steer, and stop the car automatically (the latter from speeds of up to 65 mph). The system is even smoother than an earlier version we tested on the E-Class sedan, and is augmented with additional safety features such as a thermal imaging camera that can detect pedestrians and animals in the dark.

With these leaps in advancement and the continued refinement of both looks and performance, the S-Class—and the richly appointed Maybach—endures as the yardstick by which other full-sized sedans are measured. Like a grand hotel that evolves without sacrificing its antecedent charm, Mercedes-Benz’s flagship draws in both the neophyte and the nostalgic, and leaves each equally gratified.

25,000: Number of Maybach models sold worldwide since its reintroduction in 2015