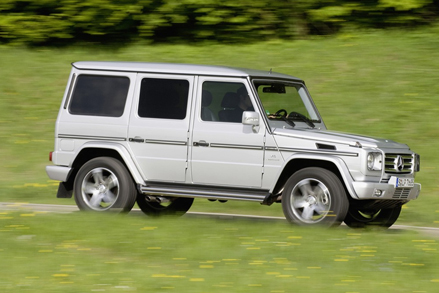 Spiraling fuel prices be damned. The colossal Mercedes-Benz G-class utility vehicle rolls defiantly into its 30th year of production with a host of revisions. Largely hand-assembled in Graz, Austria, the civilian version of the G-class (a vehicle originally conceived for military use) debuted in Europe in 1979. It didn’t arrive in the United States (legally, at least) until 2002, and despite recurrent rumors of its demise, the gargantuan Geländewagen has persevered. For 2009, the G550 supplants the G500, sporting a DOHC 5.5-liter V-8 with 382 horsepower and 390 foot-pounds of torque. The supercharged 5.5-liter V-8 in the range-topping G55 AMG earns a modest horsepower bump, from 493 to an even 500, with torque holding steady at a titanic 516 foot-pounds—sufficient to launch the off-roader’s 5,700 pounds to 60 mph in a startling 5.4 seconds and push it onward to an electronically limited top speed of 131 mph. Sharp eyes will spot a new three-bar chrome grille up front, and the G55 gets handsome 19-inch five-spoke wheels that complement stainless-steel running boards and a dual-outlet side-exit exhaust. Inside, the top model gets new heated and cooled seats wearing Designo leather upholstery, and the COMAND telematics setup now boasts a state-of-the-art hard-drive-based GPS navigation system with a 6.5-inch high-definition display and an aerial-view mode. An upgraded stability control system and a new hill-start assist help keep the big G moving in the right direction. The 2009 G550 and G55 AMG reach European showrooms in September, arriving in the United States a month later. Pricing should hew closely to the 2008 models—that is, about $90,000 for the G550 and $113,000 for the G55 AMG. (www.mbusa.com)